Covid-19 Pandemic is Opportunity to Change the World for Better: Jared Diamond 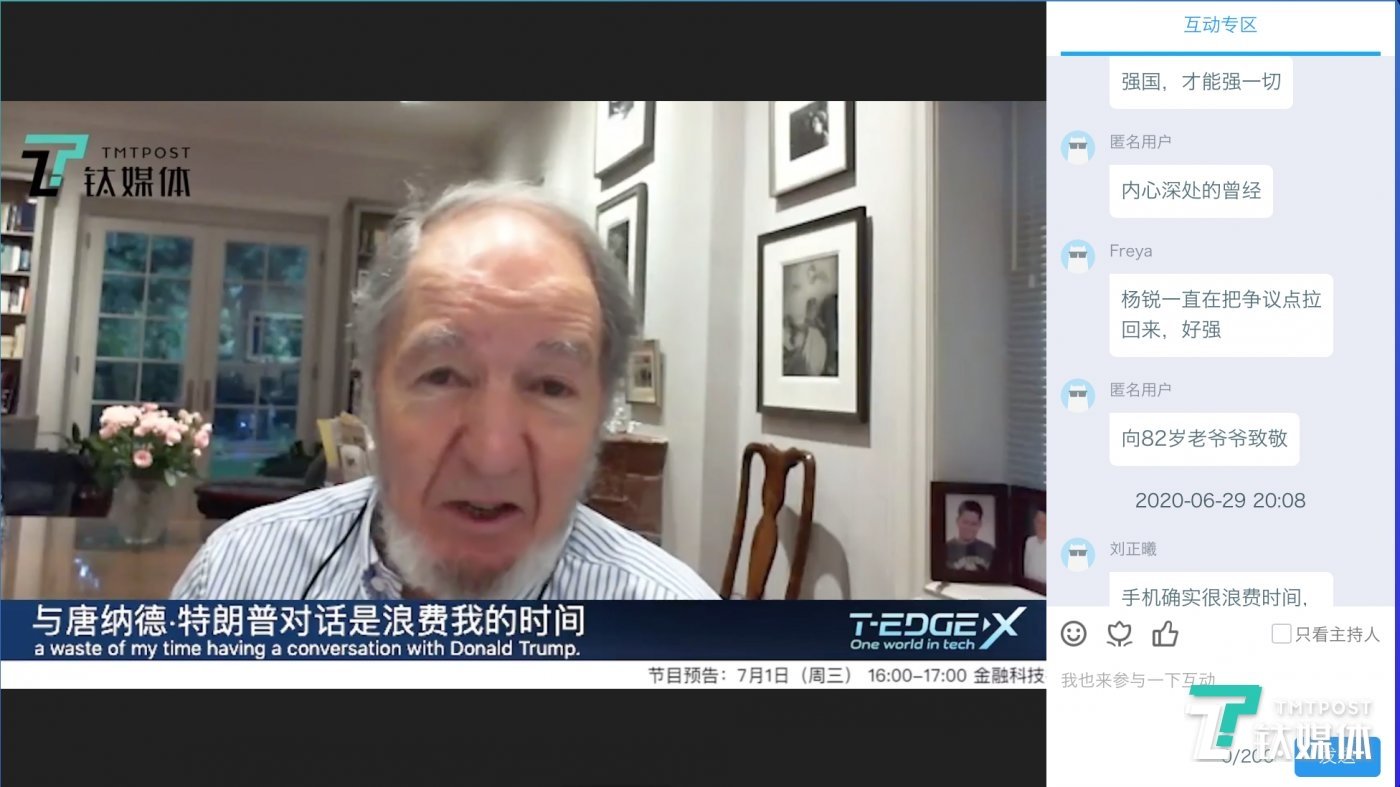 BEIJING, June 31 (TMTPOST) – Pulitzer Prize winning professor Jared M. Diamond argued that the tragic Covid-19 pandemic could paradoxically bring hope for the whole world depending on how countries react to it.

Diamond shared his insight with 200,000 viewers, who logged in for his keynote speech and a dialogue with Yang Rui, a legendary host and TMTPost’s Partner of International Affairs.  The influential media group’s month-long online tech event started on Monday.

“This crisis is an opportunity to change the world for the better,” said Diamond, biologist by training and author of a number of best-selling books, notably Guns, Germs and Steel, referring to the Covid-19 pandemic.

A Right Approach to a Crisis: Facing it

“When coming to countries, you know from experience that there are countries that blame other countries and do not resolve their crisis,” said Diamond.

Diamond pointed out that some nations acknowledge the existence of a crisis while others just deny it. Apparently that deny they are facing a national crisis will not make progress in resolving it.

He cited Germany after World War One as a country that reacted wrongly to a crisis. At the end of World War One, Germans refused to acknowledge their own faults but blamed enemies and unfaithful Germans who stabbed the country in the back, he said.

Germany made terrible decisions in the 1920s and 1930s that resulted in the election of a Nazi government and “the worse disaster for Germany, the disaster of World War Two”, Diamond told the online viewers.

By contrast, Japan in the 1800s reacted very well to a crisis when Western powers knocked on its door with gunboats, he argued.

When Japan faced a crisis due to being exposed to the West, they recognized changes had to be made quickly in order to develop strength to resist the West. It is a wonderful example of selective change. Japan did not change the emperor or its writing system. But Japan changed the form of the government, abandoned feudalism and adopted a national educational system and industrialization, he explained.

So Japan in the 1800s illustrated “a light of change”, the professor said.

One reason for us to recognize Covid-19 as a global problem is that Covid kills people quickly whereas climate change kills people by bad air quality or by causing starvation, by rising sea levels which can cause tsunamis. “Climate change doesn't kill people within two days the way Covid does,” he said.

Similar to a personal crisis, nations gain confidence from having solved previous crises, he pointed out.

When Diamond lived in Britain from 1958 to 1962, the Second World War was fresh in memory. “My British friends remembered the Battle of Britain in 1940 when Britain alone fought off the German Air Force. In the 1950s and 1960s, the British people still thought back to the Battle of Britain when Britain stood alone against Nazi Germany. That gives the British confidence they could solve any problem because of past successes," he explained.

Diamond saw similarities between national crises and the world crisis.

He predicted that the world will end the pandemic next year or the year after next, adding that it is a joint effort on the part of the whole world to solve a global problem.

Diamond argued that a similar approach should be used to attack other global problems, including climate change, because any single country alone could not solve them.

Neither the United States nor China can reduce carbon dioxide levels over themselves alone given the atmosphere is mixed over the whole world, he told the viewers.

“These are problems that require global solutions. But until now, until Covid, the world has refused to recognize that we need a global approach to solving a global problem,” he pointed out.

“Covid is a terrible tragedy. Nonetheless, it makes me feel cautiously optimistic…because the world is in the process of recognizing that this is a global problem and that for the first time the whole world has to unite in solving the problem,” Diamond explained.

He hoped that Covid-19 will inspire countries of the world to work together to solve the serious problems facing the world, including climate change, resource depletion, the problem of diminishing seafood and forest levels.

“If that's the case, then this crisis of Covid may cause our world to change for the better,” he concluded.

(For the entire keynote speech, please check out: https://www.tmtpost.com/watch/s9Z5n1 )