The Rage Room Helps People Blow Off Steam in China

摘要： Spotting some opportunities brought by high pressure suffered by young people in cities, and a shortage of new entertainment choices, someone has opened a rage room in Beijing, where consumers seek "catharsis through willful demolition", all with a fee.

The people in China are putting more and more on their shoulders. Placed under pressure, some bear it in silence, some turn to alcohol, some play sports or games, and some seek catharsis through violence. Spotting some opportunities brought by high pressure suffered by young people in cities, and a shortage of new entertainment choices, someone has opened a rage room in Beijing, a novel consumer attraction to cater for the needs for better moods management of urban dwellers, where consumers seek "catharsis through willful demolition", all with a fee.

"We opened the place in September and it is the first rage room in Beijing," said owner Jocelyn to TMTPOST Image. After more than 20 case studies of rage rooms in other countries, she and her friends decided Beijing is the city to launch this new way of entertainment. "We are targeting urban residents aged from 20 to 35, with more focus on young people aged from 20 to 25. They like trying new things and are bored with traditional amusements such as escape rooms. They are eager to try something new and exciting."

There are many choices in the rage room for customers to smash, such as old appliances and used office supplies which the owner purchased in markets for second-hand appliances, and alcohol bottles, bought from restaurants and bars. Customers may choose to pay the minimum price of 198 Yuan for a basic single-person package which includes a basket containing 15 bottles, protective clothing, a protective facial mask, protective gloves and a wooden baseball bat. The session lasts 30 minutes. 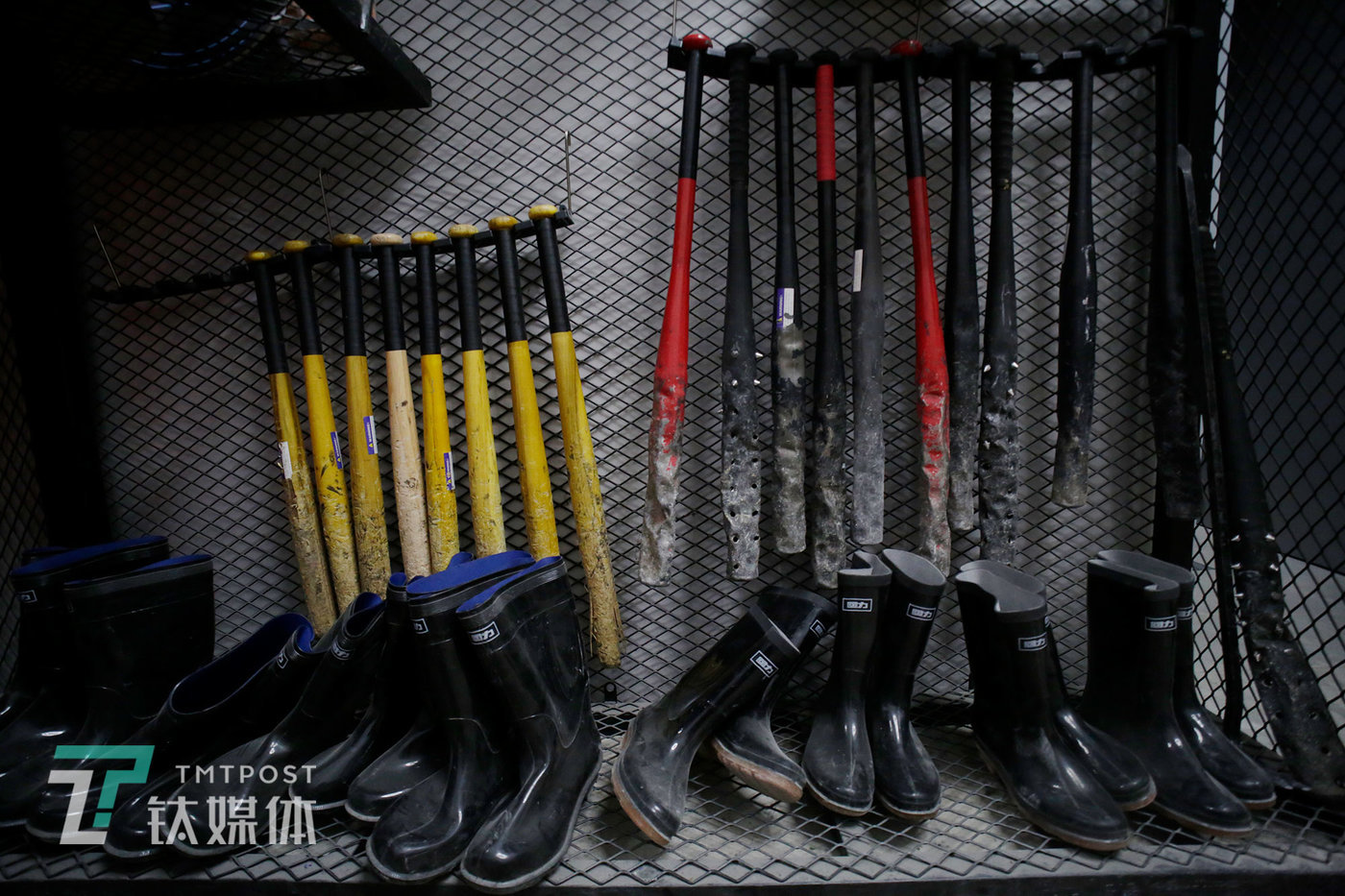 "Weapons" for customers to choose from. Three months since the business opened and these wooden and iron bats are heavily damaged already.

"Customers also have the choice to pay extra for individually priced items on top of packages. Their prices range from dozens of Yuan to hundreds of Yuan. For example, a single-door refrigerator costs 375 Yuan; a keyboard, 100 Yuan; a basket of beer bottles, 80 Yuan." 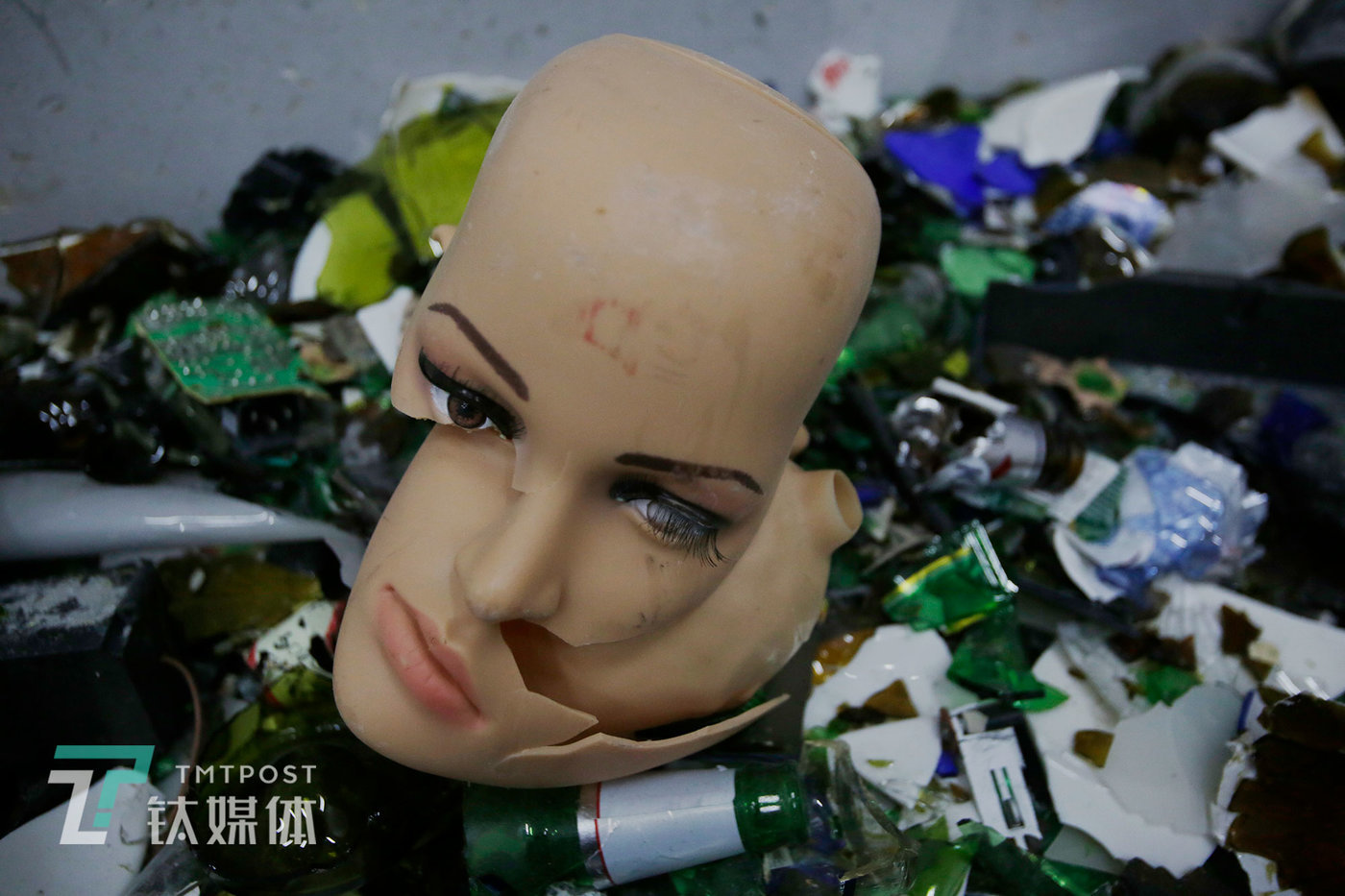 A head of a smashed mannequin. The price for smashing a mannequin is 250 Yuan.

Customers are also allowed to bring their own items to the rage room. A female customer once came with her wedding photos. After she smashed them all, she asked for a pair of scissors from the assistant and cut all that remained to pieces before she was totally satisfied. 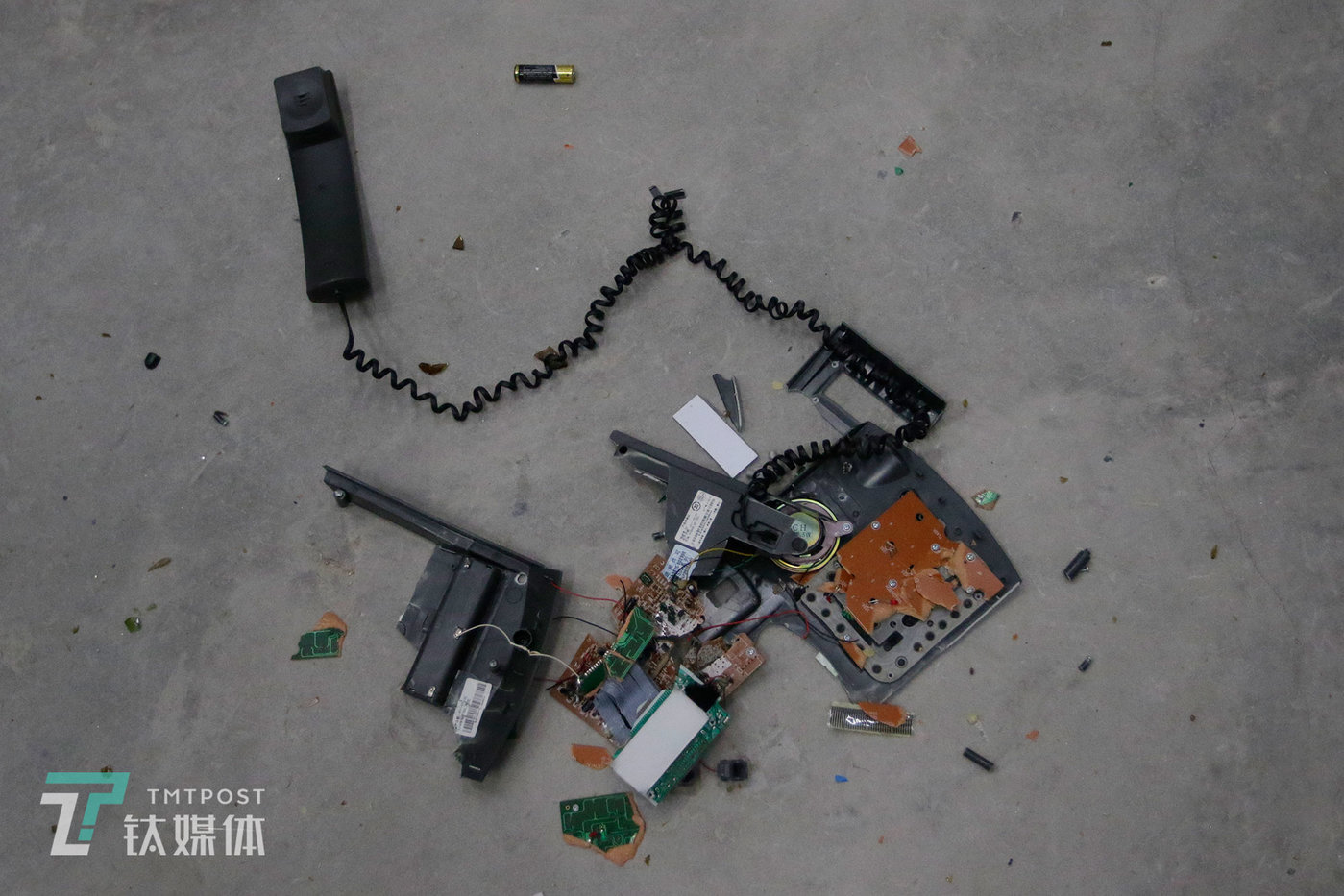 A telephone smashed by a female customer. The lady said that she treated this telephone as her ex-boyfriend.

"People need rituals for bidding farewell to landmarks in their life." Owner Jocelyn had a female customer, a young lady who smashed two baskets of bottles by herself and then sobbed for a very long time sitting on the floor.

Shop assistant Xiao Xin meets all kinds of customers every day. To her, not all customers who come for some kind of release have a negative attitude. "They have good attitudes and are courteous towards others. They just need a channel to vent their stress. There was this male customer who came alone and dived right into smashing and cursing the moment he closed the rage room door. Sounded like he was badmouthing his boss. However, as soon as he finished the demolition and came out of the room, he was normal again." 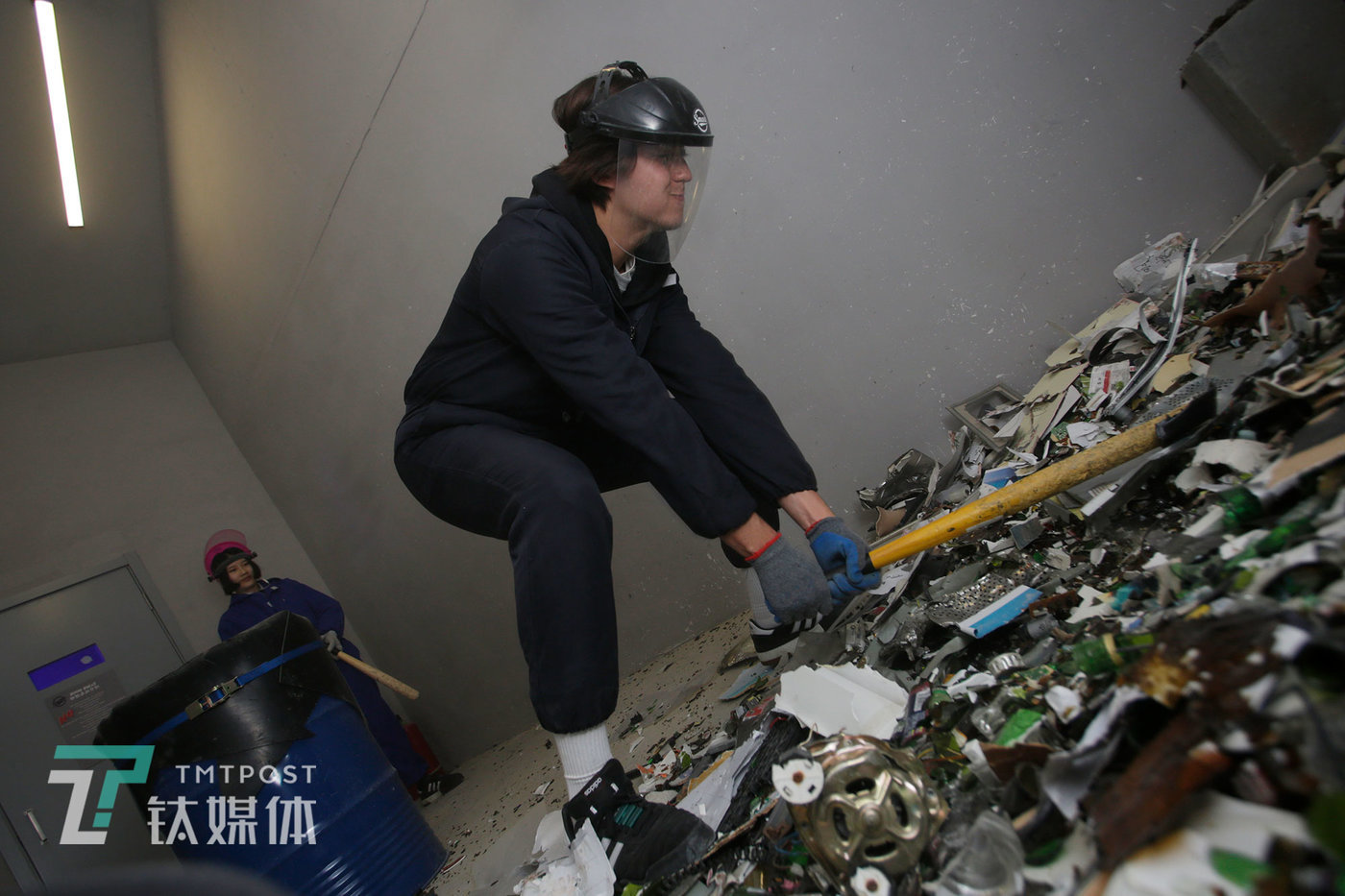 After smashing the bottles in his basket, the Australian visitor hasn't had enough and continues smashing the fragments, wielding his baseball bat. 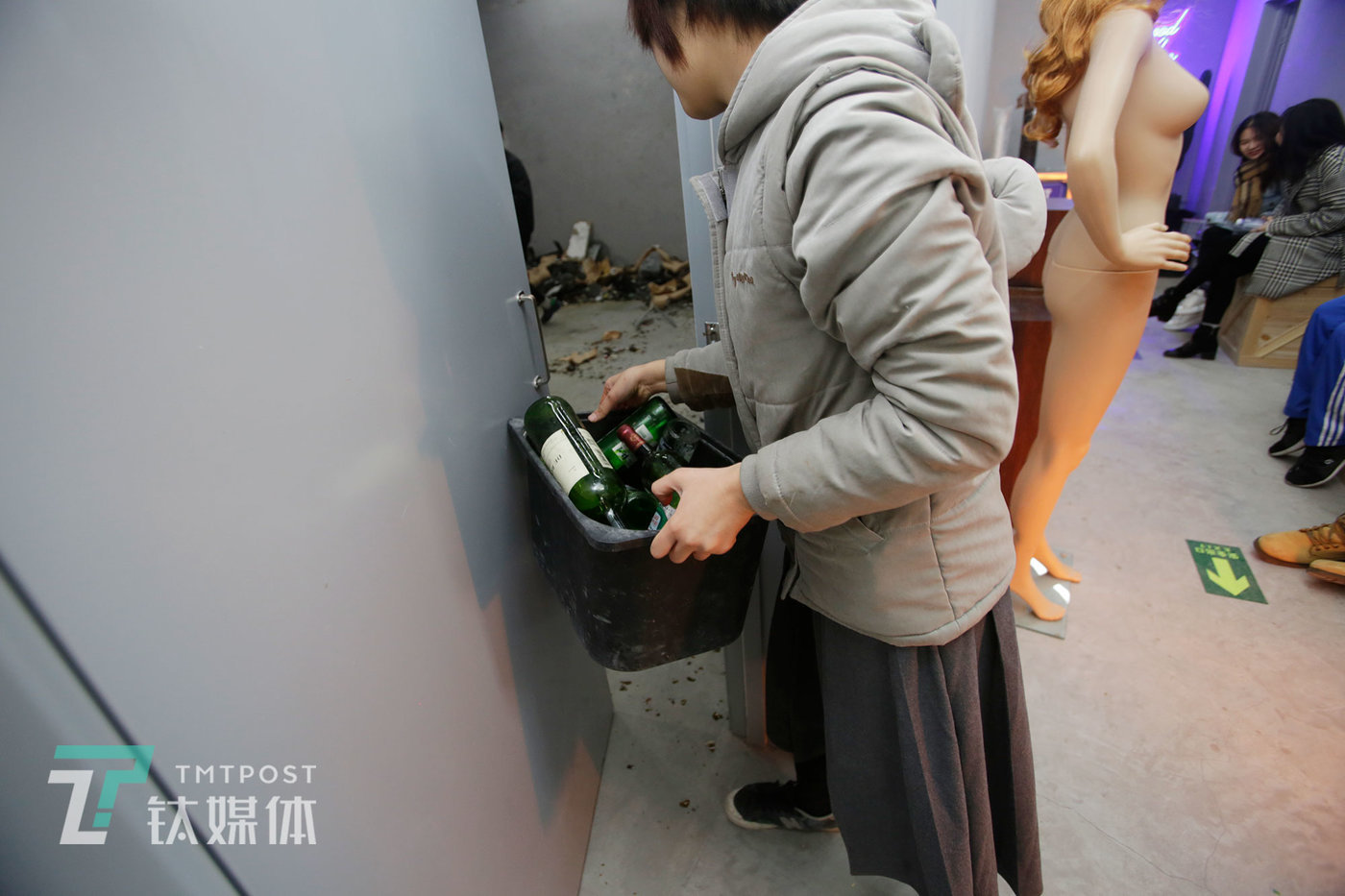 Assistant Xiao Xin brings in "extra" for a customer. Many customers feel unsatisfied after smashing everything in their packages. They will then shout their orders for "another basket", just like customers in a restaurant.

"Sometimes mothers bring their high school children here since the children are under serious pressure from exams which needs release." The reporter of TMTPost Image met a female customer who brought her little brother in the shop. The lady is working in sales and high pressure is the norm for her. Her brother is in high school and was having a lot of exams and being nagged by their mother often lately. So both of them needed to vent their stress.

Most people come here for catharsis but some customers are here purely for their amusement. "Every week, more than 100 customers visit the shop to smash things. They spend different amounts, ranging from just over 100 Yuan to several thousand Yuan. Many come here for team building. Usually a dozen of them will come in together, smash until they are drenched in sweat and then leave." According to the assistant, "A young man came in once with his girlfriend and the two of them kept smashing and spent more than 2,000 Yuan. They were only here for amusement." 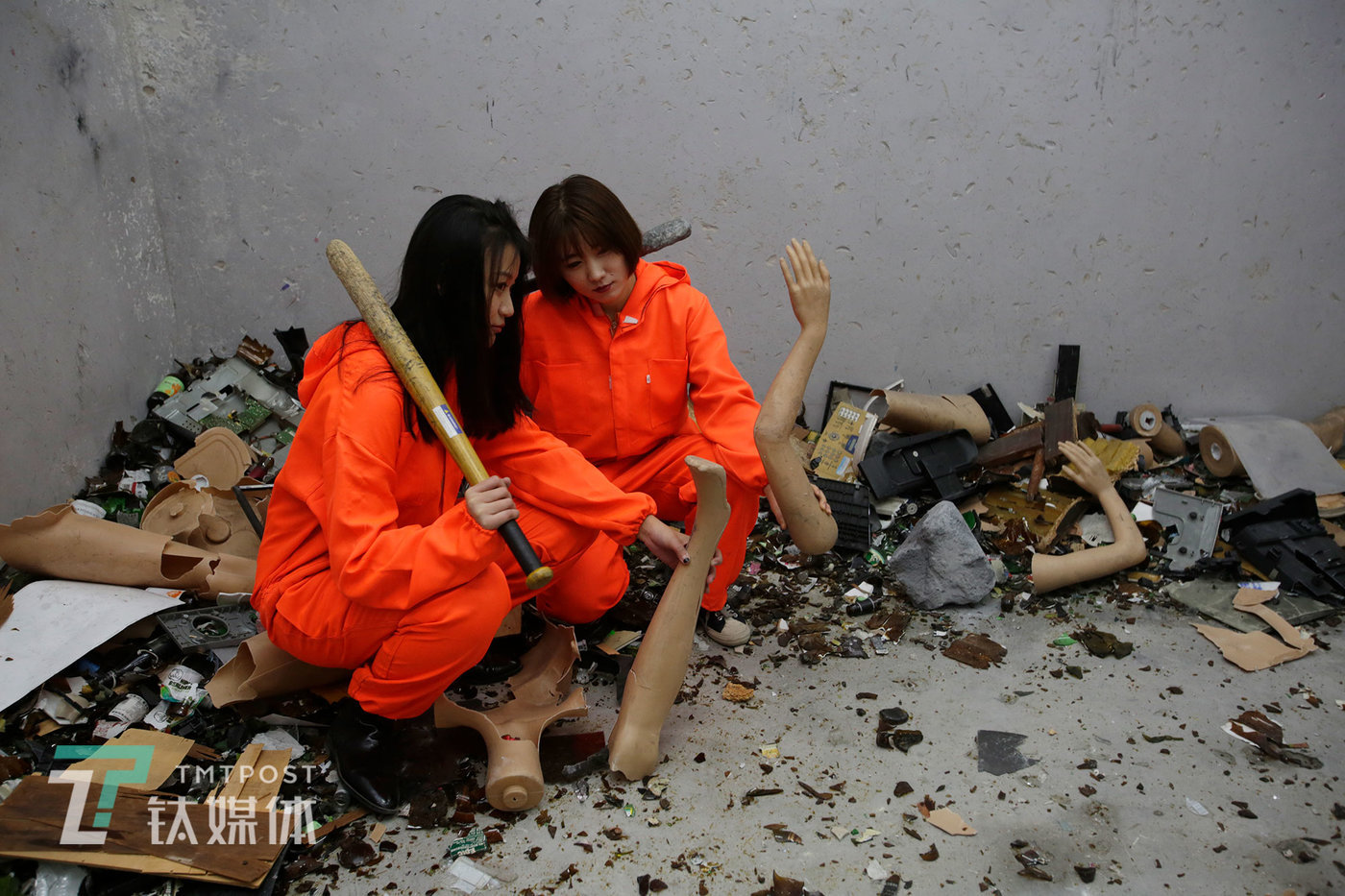 Two female customers are having their photo taken in the rage room. Soon after its opening, the rage room has become an attraction for internet blogebrities to tick their bucket lists. Many customers come to experience the rage room after seeing online short clips about it. 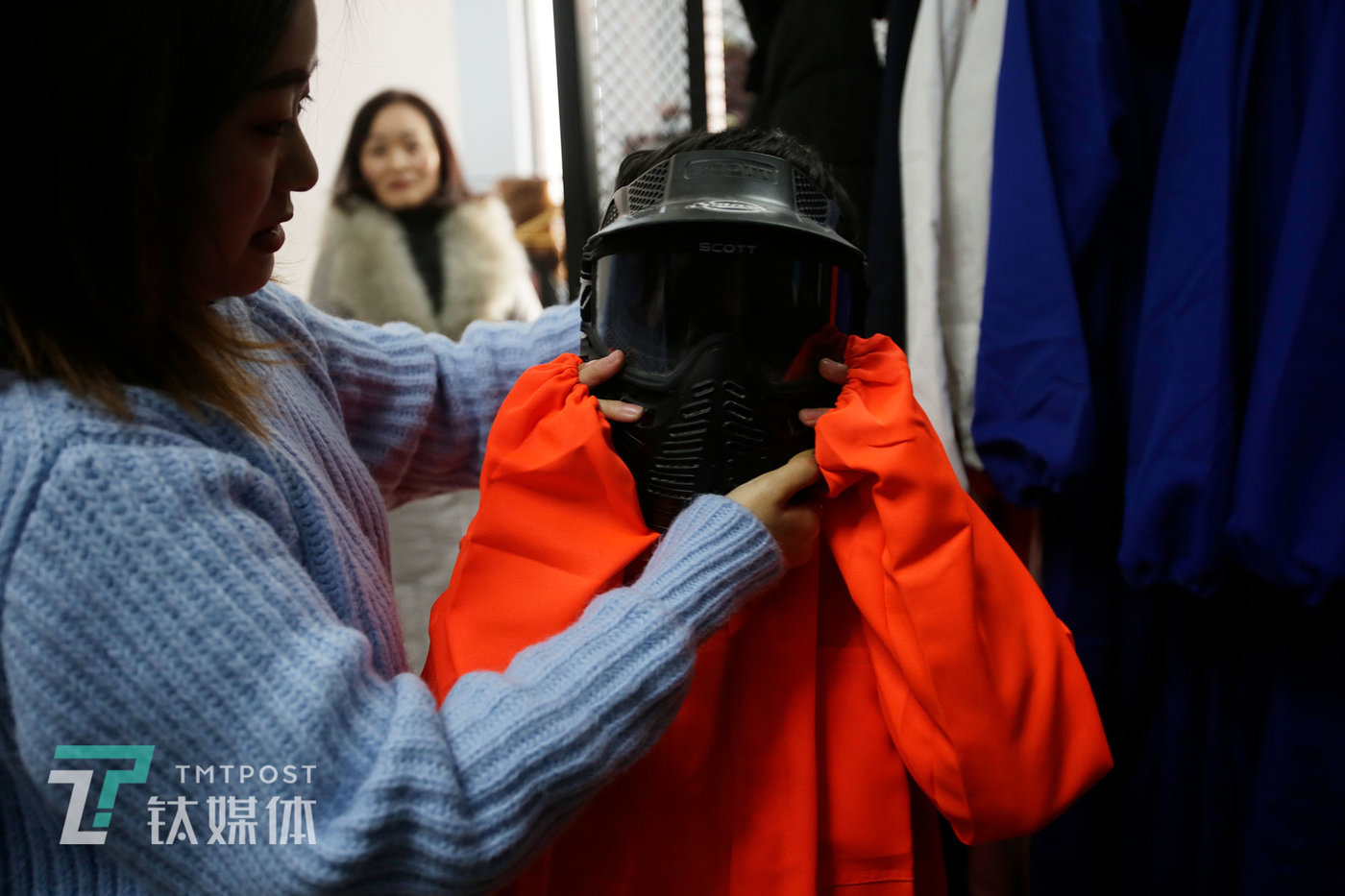 A 12 year old girl puts on a protective helmet with the help of the shop owner. She and her classmates came together after viewing some short video clips on the popular short-form video app Douyin, which is named Tik Tok outside China.

The business data of the past three months shows that most visitors are female. "Women are more accustomed to handling their emotional issues in a direct manner. They smash things and their feeling of the blues is gone. Men find it difficult to be so direct. They suffer in silence." Owner Jocelyn explained. 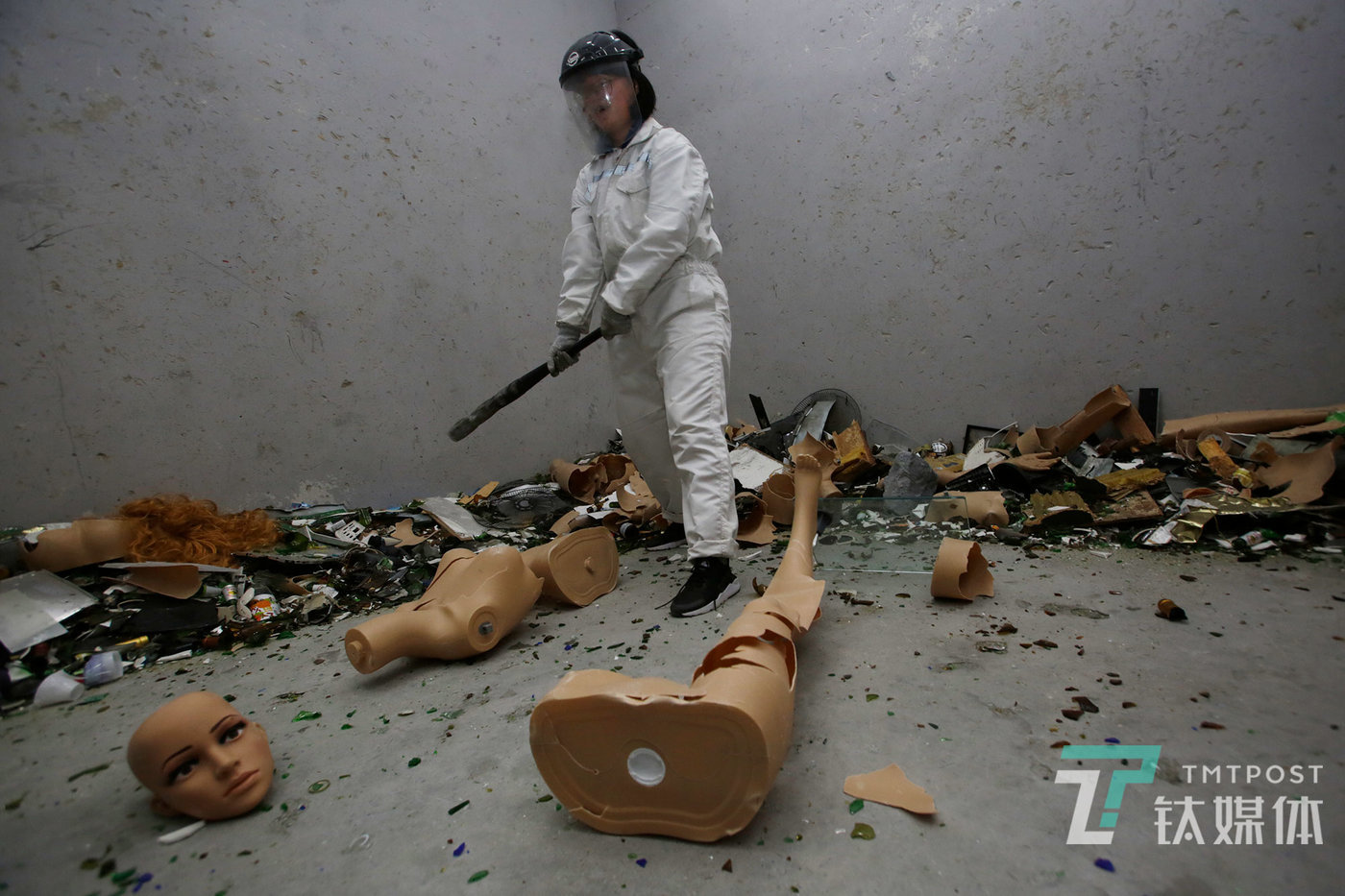 A female customer holds an iron bat, ready to smash an already disintegrated mannequin. She came with three female colleagues for release and smashed several baskets of bottles and a mannequin. "She has had the blues recently," a friend of her told TMTPOST Image.

"I haven't seen returning customers," said owner Jocelyn to TMTPOST Image. However, she believes this is a sustainable business since young people love new entertainment ideas and also need "ways to release their stress, which is really quite high".

(TMTPOST Image seeks to accurately record those individuals in the era of internet. TMTPOST owns the copyright of all images, texts and videos. Any unauthorized use or reproduction of these documents in any form or means is prohibited. Otherwise, TMTPOST reserves right to pursue legal responsibilities.)