A visit to the most intense "competition with kids" in China

【TMTpost Image seeks to accurately record those individuals in the era of Internet. TMTpost owns the copyright of all images, texts and videos. Any unauthorized use or reproduction of these documents in any form or means is prohibited. Otherwise, TMTpost reserves right to pursue legal responsibilities.】 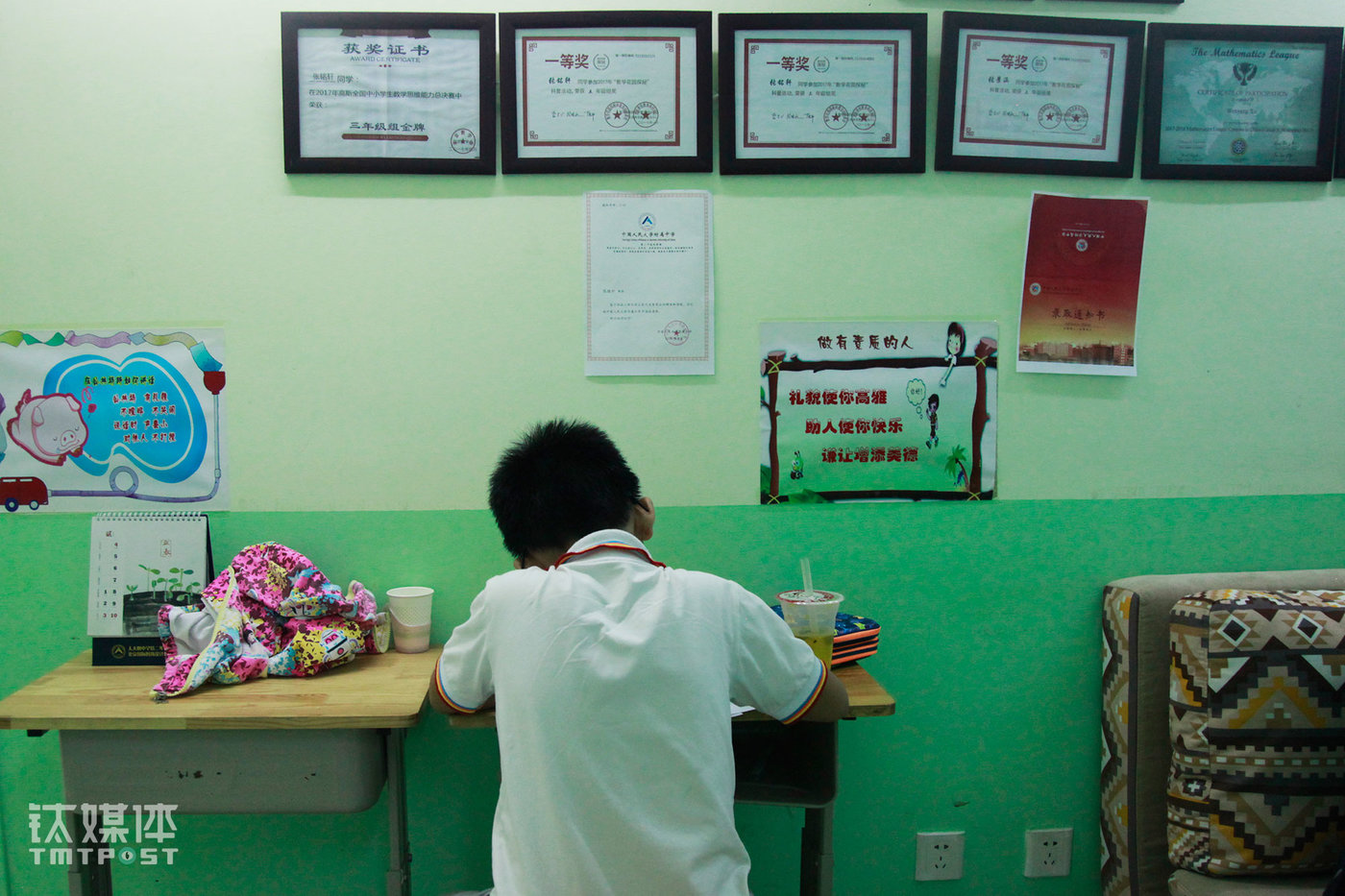 Duoduo, a sixth grader does his homework in Bosi Education, a tutoring school in Zhongguanchun, Beijing, on September 14, 2018. He's just finished a Mathematical Olympiad in the school, and will rush off for a Chinese language class in another tutoring school one hour later.

The rise of K12 online education is changing children's study methods and ways of getting quality education resources. But under the traditional exam-oriented education system, offline after school tutoring still remains irreplaceable thanks to its individualization and professionalism.

In February, four ministries and commissions led by the Ministry of Education introduced a special rectification notice against after-school tutoring agencies, aiming to tackle behaviors such as advanced teaching and teaching beyond syllabus. The plan is supported by some parents, who believe it would ease pressure on their children and families. However, the opponents believe intense competition to enter a higher school will not disappear because of burden alleviation, while imposing uniformity would deprive some children with learning desire and ability of extensive and deep learning opportunities, and make those who have top-notch potentials end up mediocrity.

Children from Dongcheng and Xicheng Districts compare whose parents are more powerful or rich, while parents from Haidian District compete with their kids. Parents from Haidian District are a typical group who oppose burden alleviation. Haidian District has China's top technology talents, high-level intellectuals, prestigious middle and primary schools and key universities. Children from this District study longer at tutoring classes than regular classes. TMTpost recently interviewed a tutoring school near ‎Zhongguancun No.1 Primary School, which is known as the best primary school in China. Parents, students and tutoring teachers all have their missions on the battlefield of entering high schools. 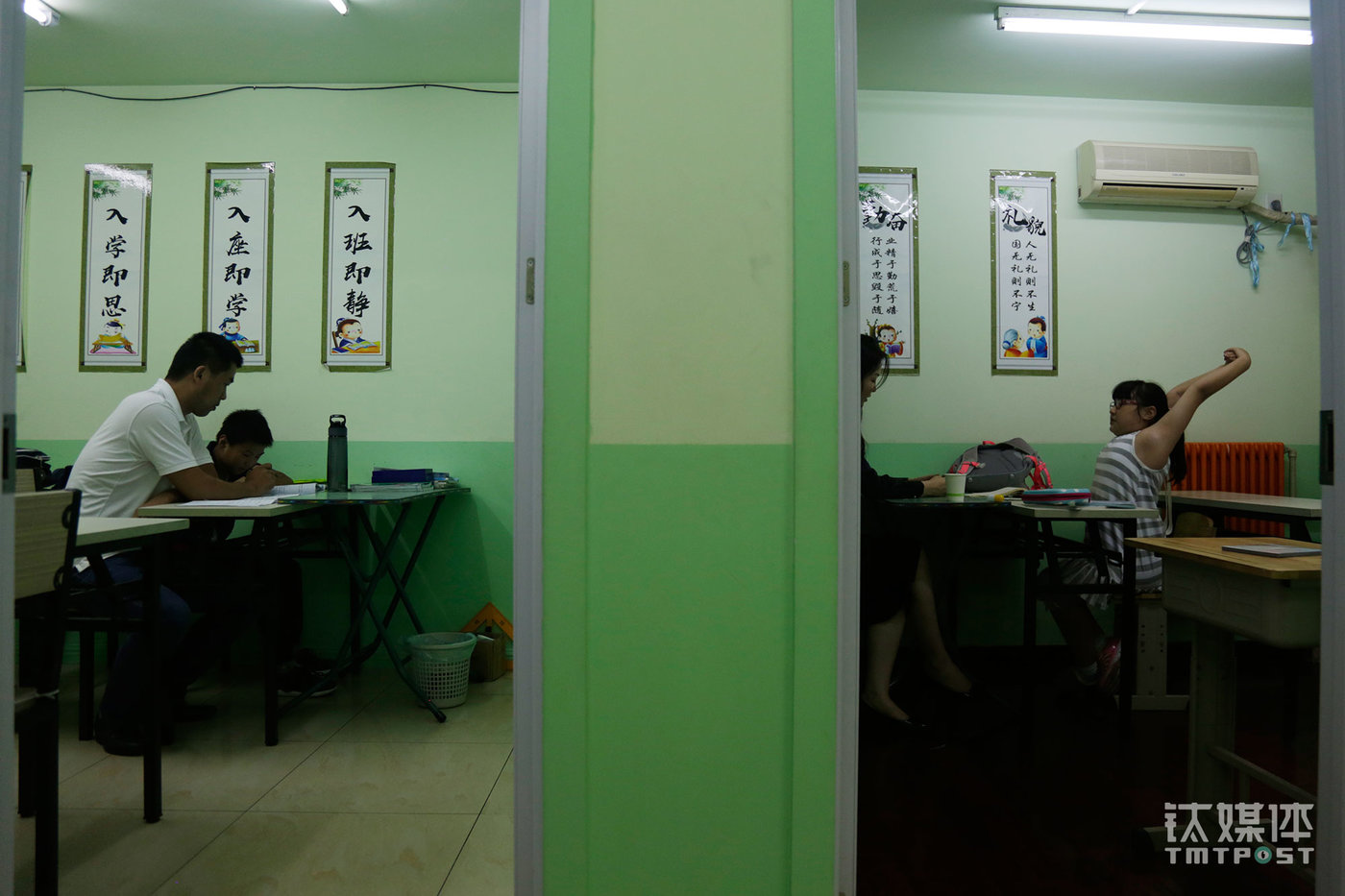 Two teachers teach two students who came to the class after school. The tutoring school and Zhongguancun No. 1 Primary School are only separated by a wall. There are over 40 various tutoring schools for primary school students in this area. (Photo by Chen Zheng) 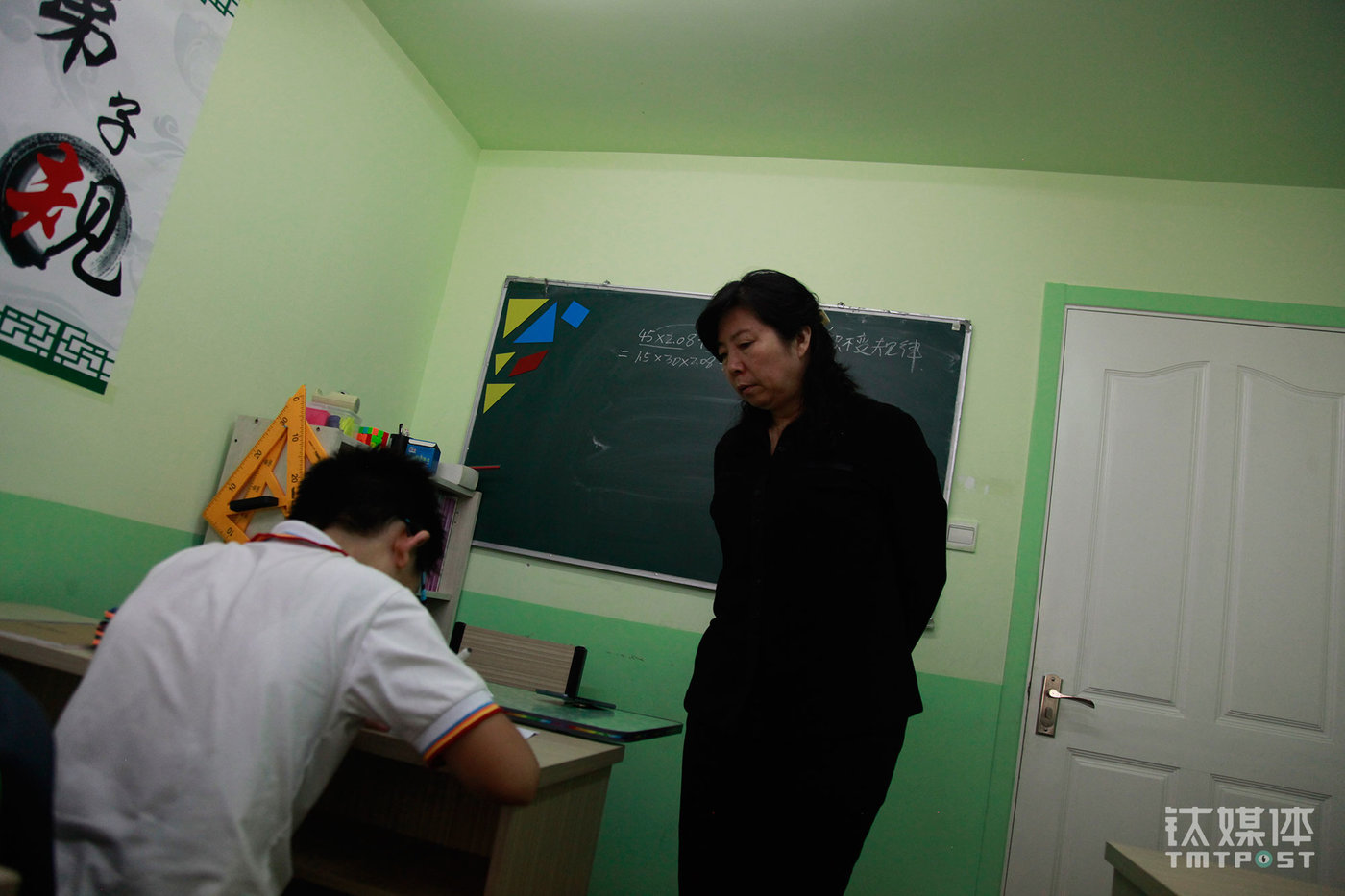 Zhou Ling, founder of Bosi Education, used to be a high school math teacher. She started after school tutoring aiming at primary and secondary school students 9 years ago. The tutoring focuses on entrance to junior high schools. The school occupies an area of about 90 square meters and has three classrooms and five teachers (part time). 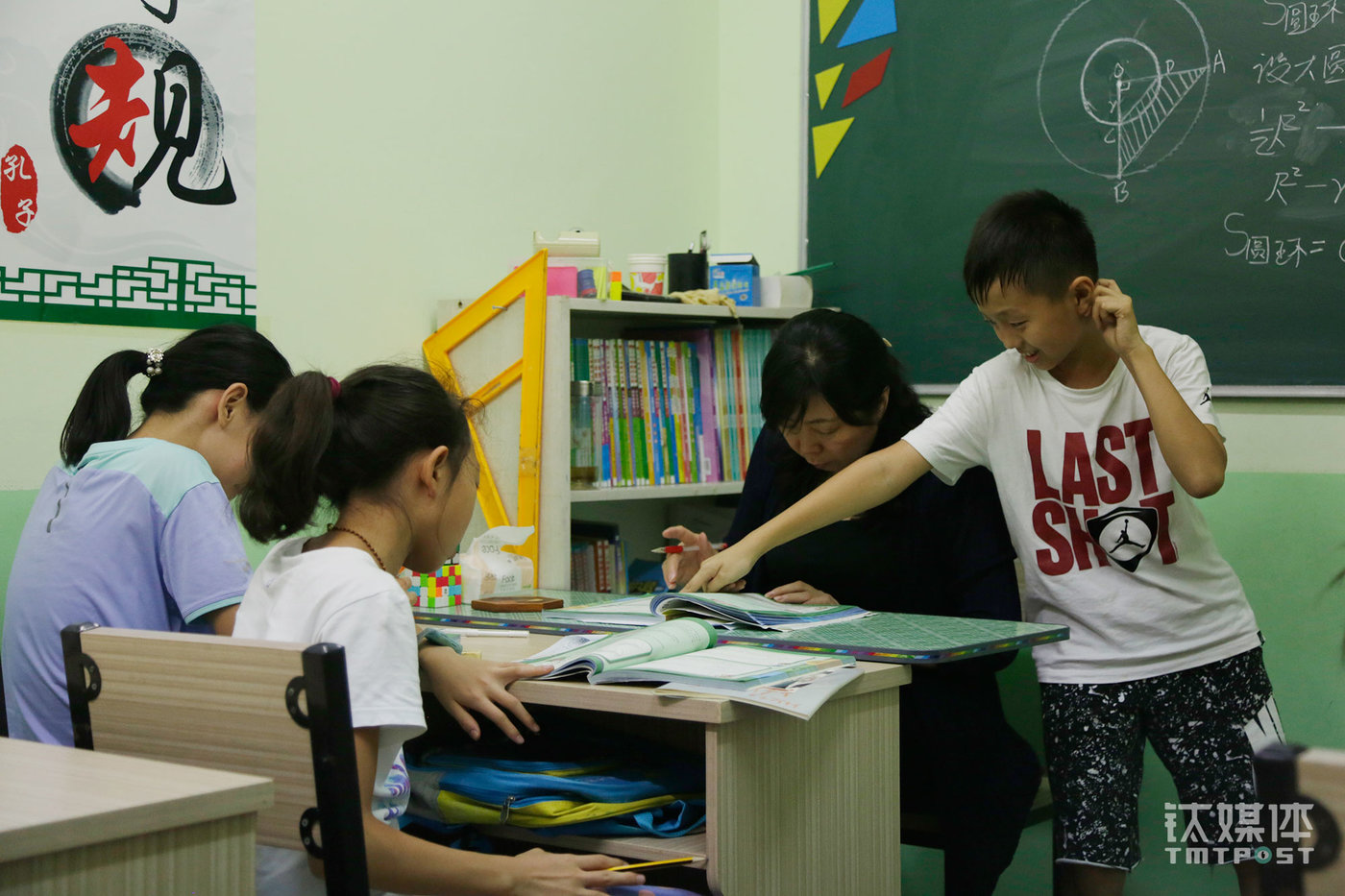 Compared with Mathematical Olympiad tutoring for school choice, math at regular classes is much easier. "Fifty percent of my classmates score 100 in math examination, 95 is just an average score," said a student from Zhongguancun No. 1 Primary School. 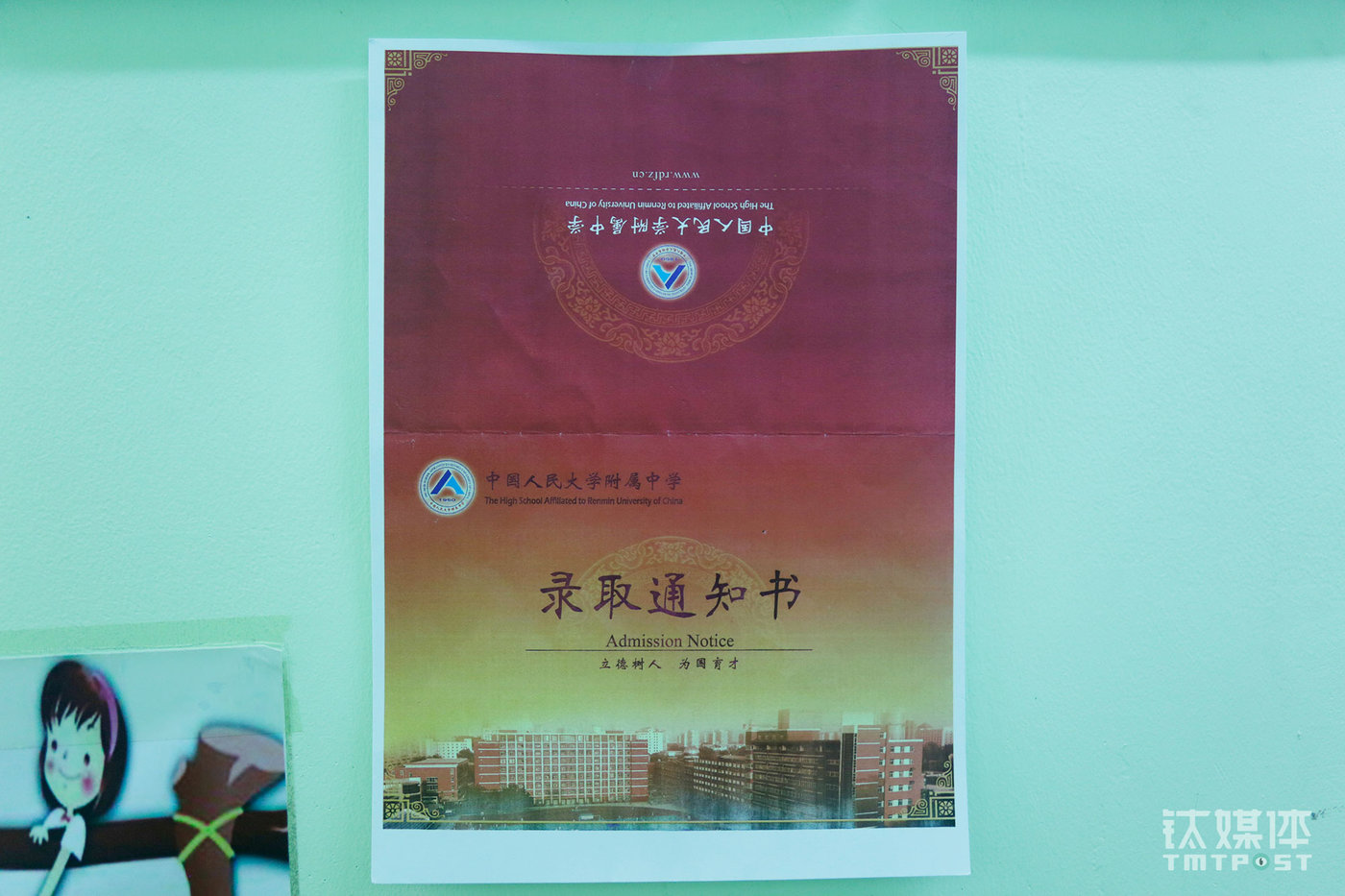 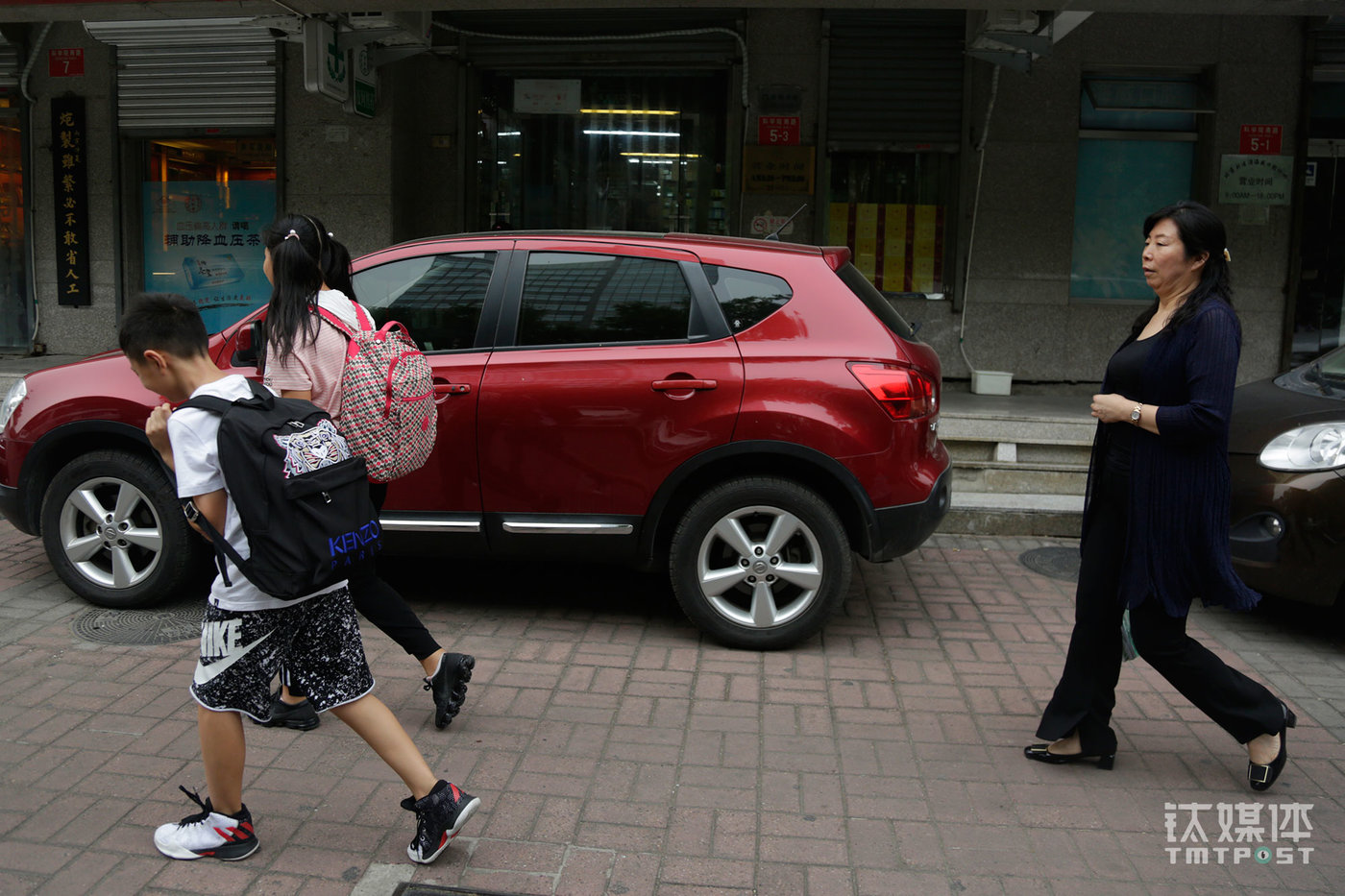 Zhou picks up students for tutoring after school at the gate of Zhongguancun No. 1 Primary School. The students have classes in Zhou's school for three to five years. "I have tutoring classes of Mathematical Olympiad, Chinese and English languages after school every day," a student told TMTpost. "I also take interest classes. I don't feel tired. I'm already used to it." (Photo by Chen Zheng) 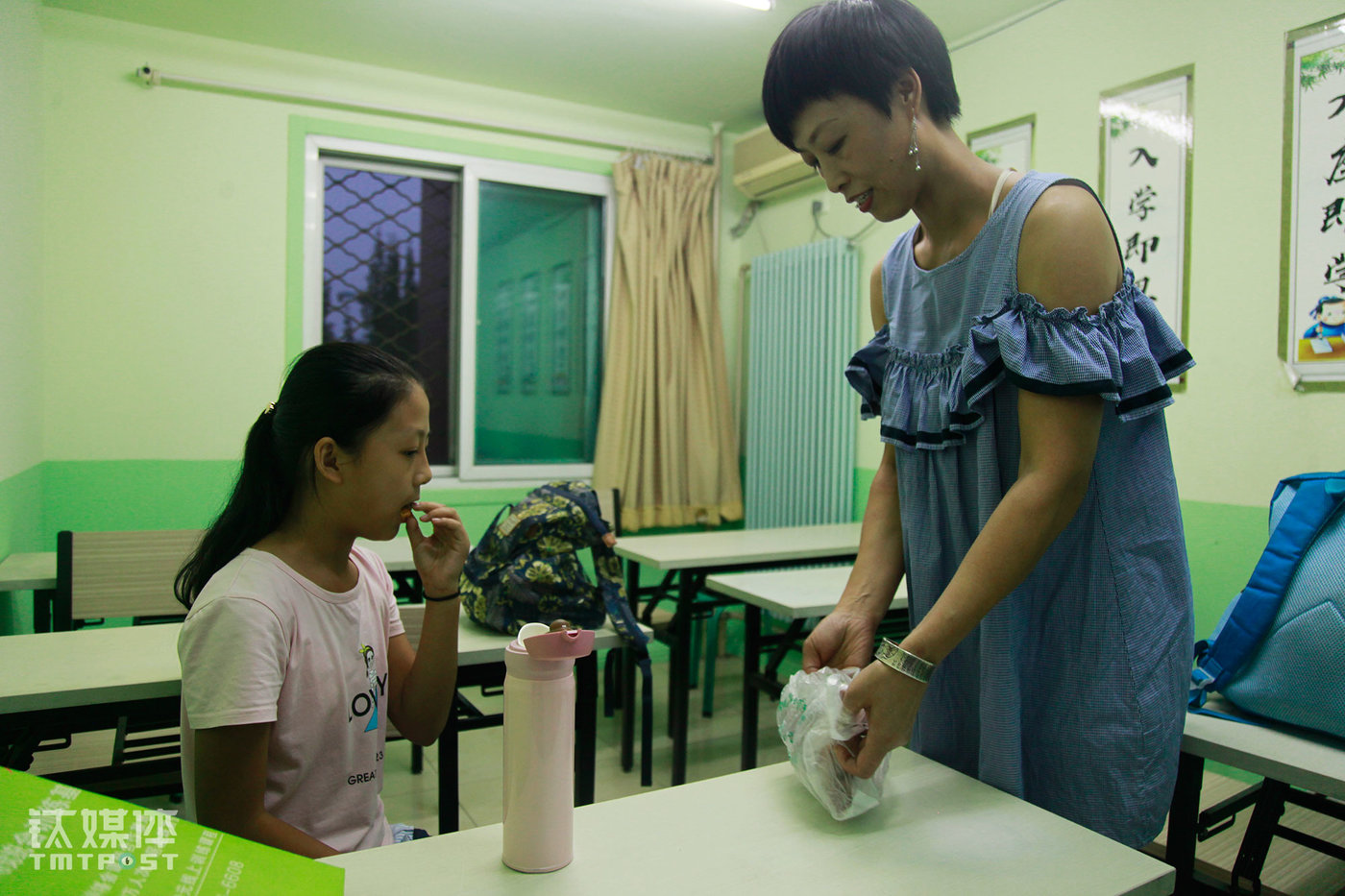 Four grader Xuanxuan has a little bread after the Mathematical Olympiad class before she goes to an English tutoring class. She can't have dinner until 9pm after the class. "Kids have tutoring classes one after another after school everyday, which is very common in Haidian District," Xuanxuan's mom said. Xuanxuan has been doing this for one year, and she has to do her homework until 10:30pm after the tutoring classes everyday. Her biggest dream is to enter The High School Affiliated to Renmin University. 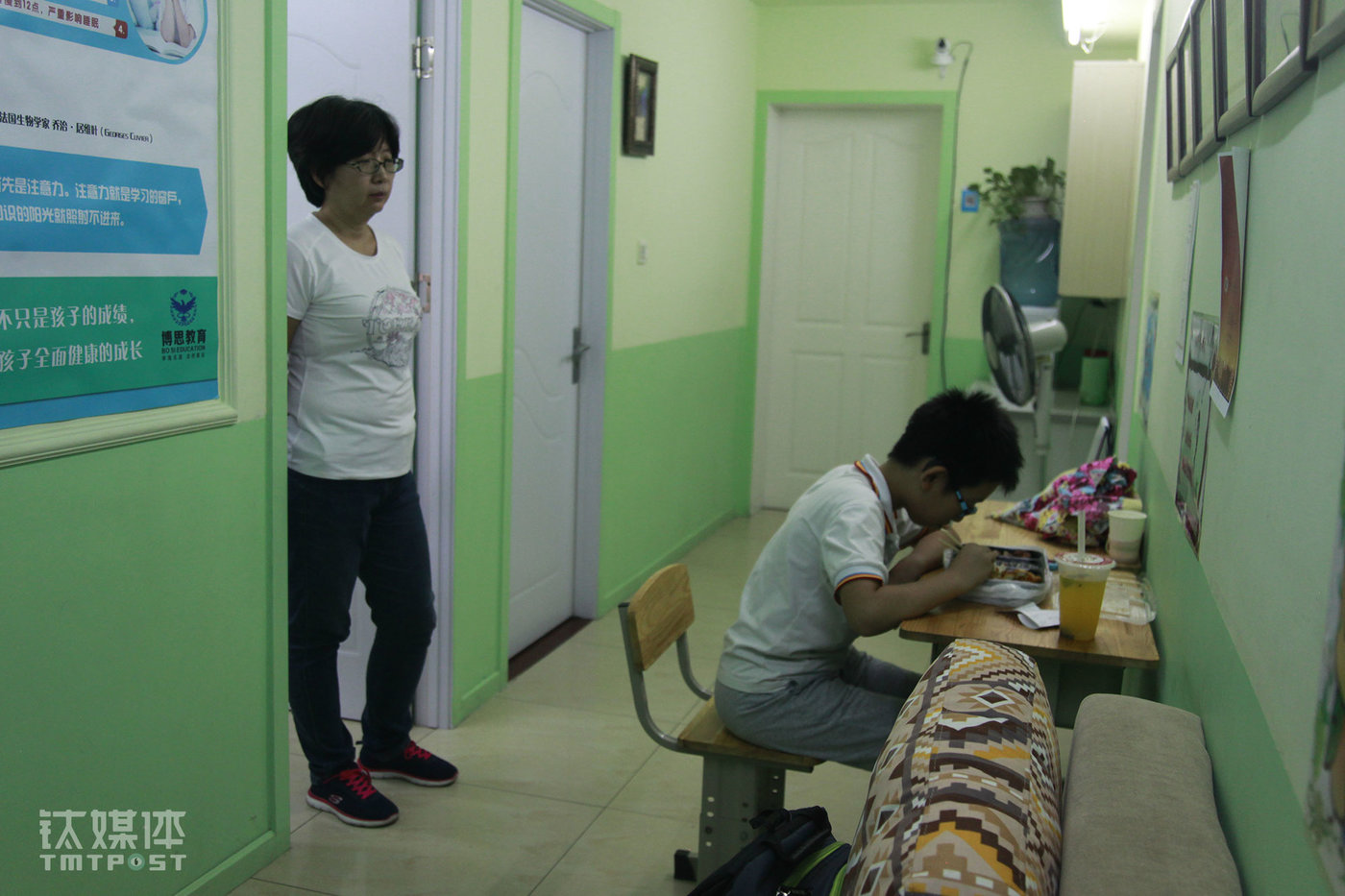 Sixth grader Duoduo is also a busy child after school. He quickly grabs some food that his mom bought before he has the next tutoring class. Duoduo's mom says she feels bad, "my son studies hard but we have no choice because of the competition. He has to study." She's pleased to see Duoduo is enthusiastic about learning, "My son voluntarily picked some tutoring and interest classes." 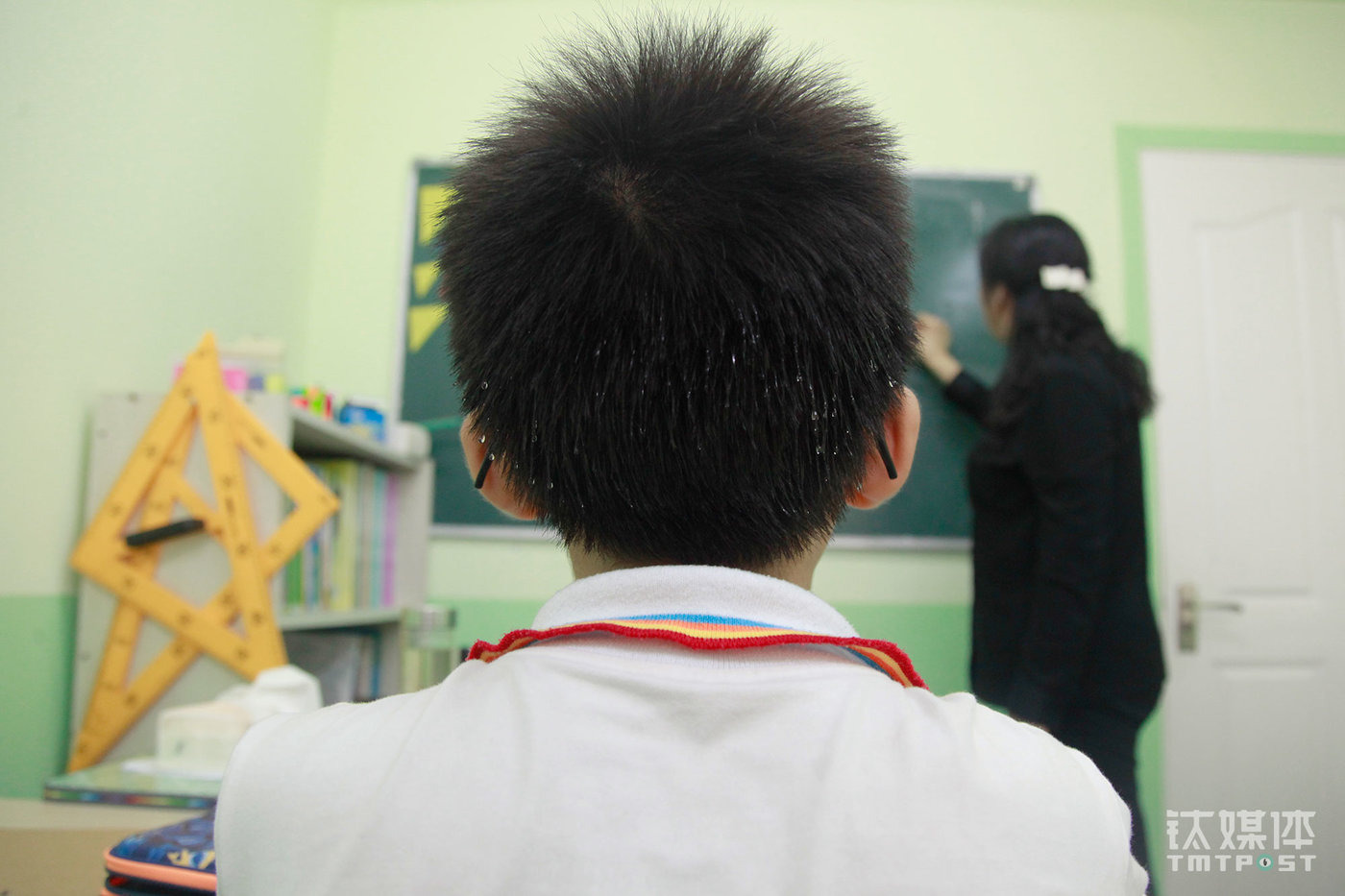 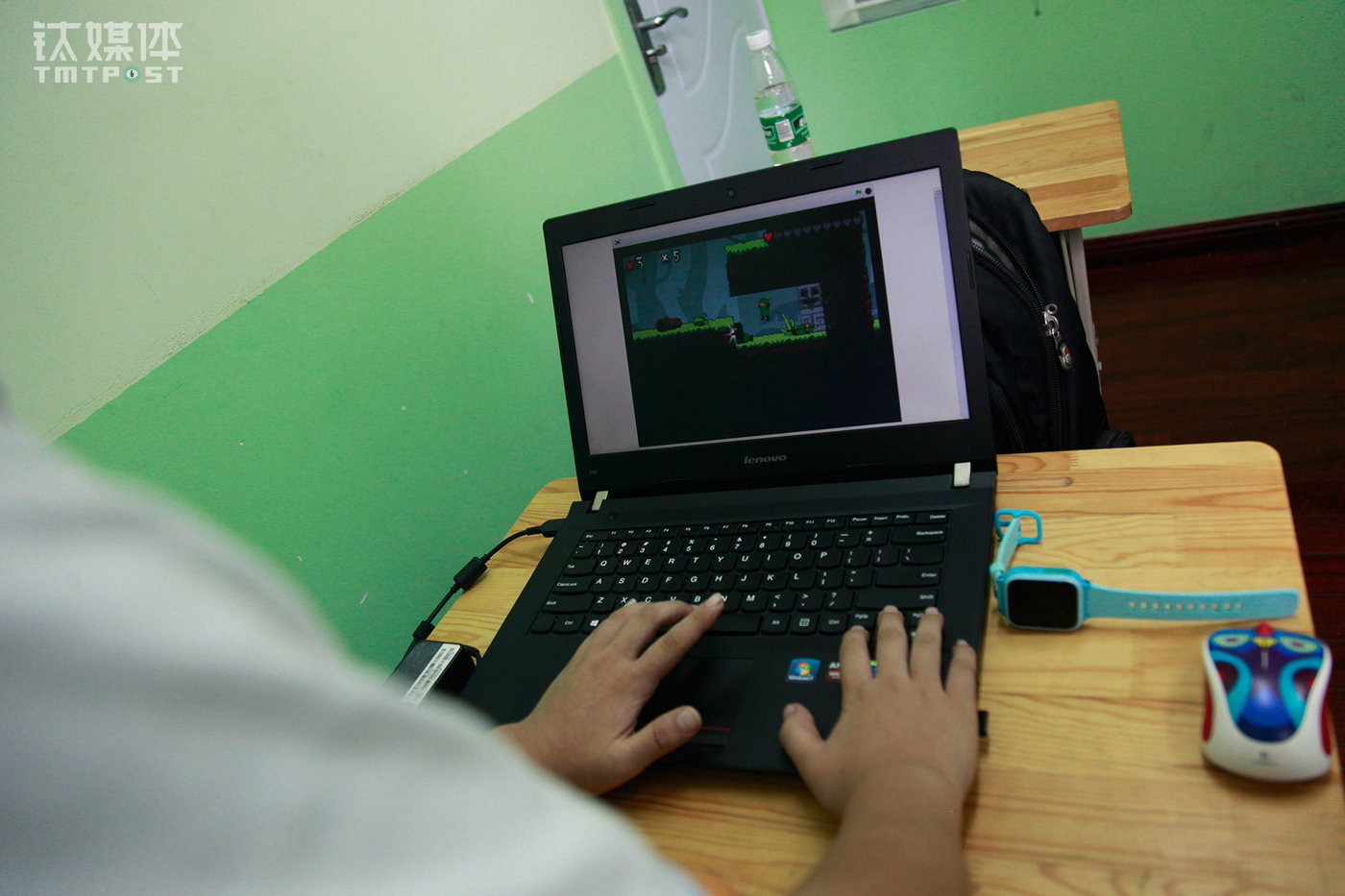 Duoduo plays games to relax during the 10 minutes break between classes. Duoduo programmed the game by himself. He plays games for no more than 30 minutes every day. He's much busier on weekends than school days because he needs to take tutoring classes. Duoduo's mom says they spend over RMB 10,000 (about USD 1,470) per month on Duoduo's tutoring classes since he's now in the 6th grade. Parents are under great mental and material pressure when competing with their kids. 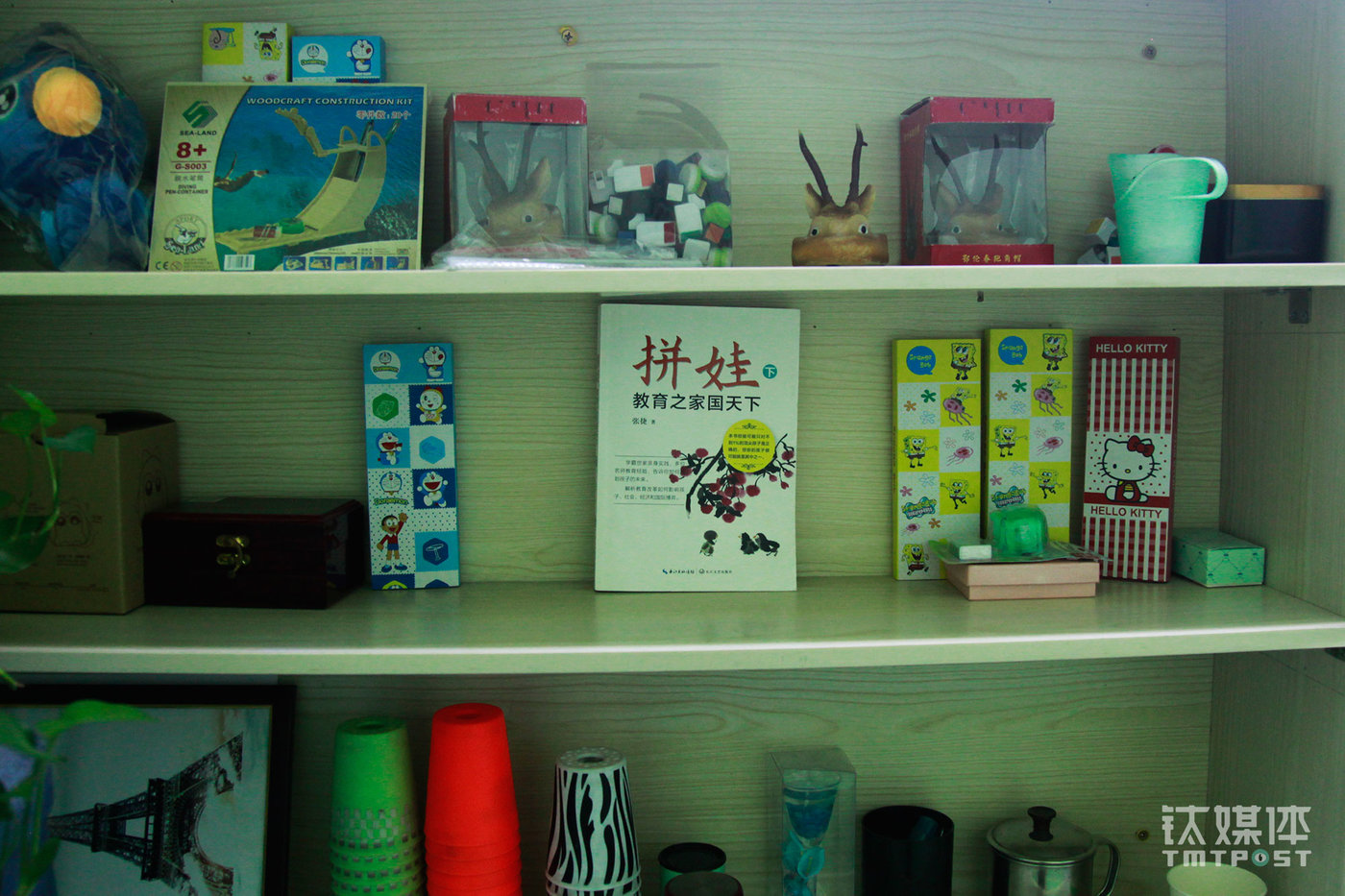 A book written by a parent is seen on the shelf of the tutoring school. "For students who are willing to learn and good at exploration, study is not a burden at all, so burden alleviation is out of the question. On the contrary, we should satisfy their learning desire and the nature of exploring the unknown," Zhou said. There are many high-level intellectuals among the parents she knows in Haidian District. They never want to see their children's social status in the future worse than themselves now. Urging on their kids to study hard can actually contribute to a better future of the children.

【TMTpost Image seeks to accurately record individuals in the Internet start-up tide. The images are real but cannot tell all. The images are free but also can be a trap. In the era of "online," let's discover more……】