摘要： There are a group of workers who dispatch shared bikes in the simplest way amid the bike tides in cities to ensure balanced allocation.

【TMTPost Image "Online" section seeks to accurately record those individuals in the era of Internet. TMTPost owns the copyright of all images, texts and videos. Any unauthorized use or reproduction of these documents in any form or means is prohibited. Otherwise, TMTPost reserves right to pursue legal responsibilities.】 During morning and evening rush hours, shared bike tides flow with crowds in cities. However, bike supply and demand is often found imbalanced between office buildings, bus stops, residential areas and subway stations. There are a group of workers who dispatch the shared bikes in the simplest way amid the bike tides, to ensure balanced allocation. 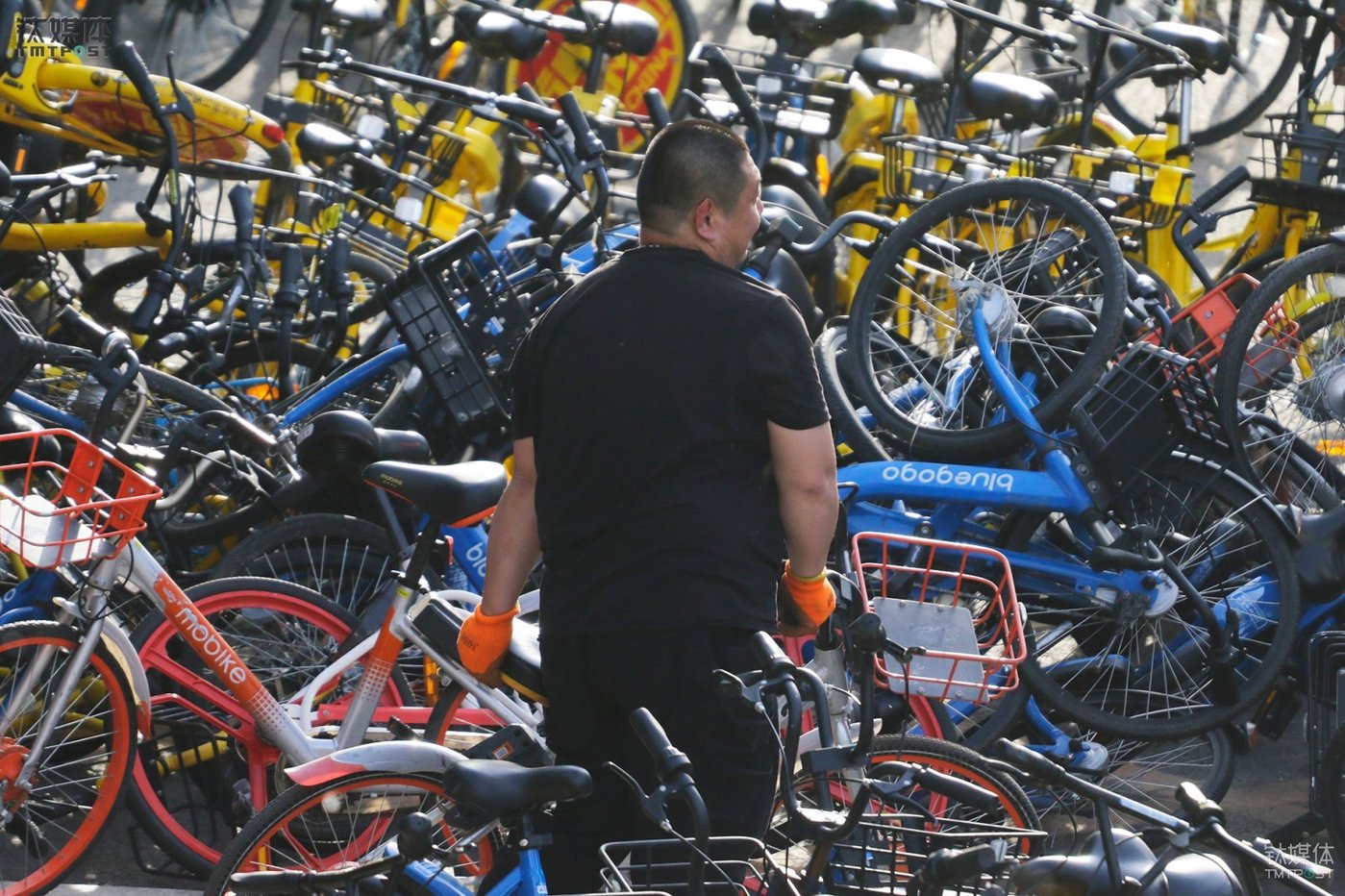 Daqiang is a shared bike mover. He delivers bikes with a cargo tricycle or van between bus stops, subway stations and office buildings in urban areas in Beijing everyday. 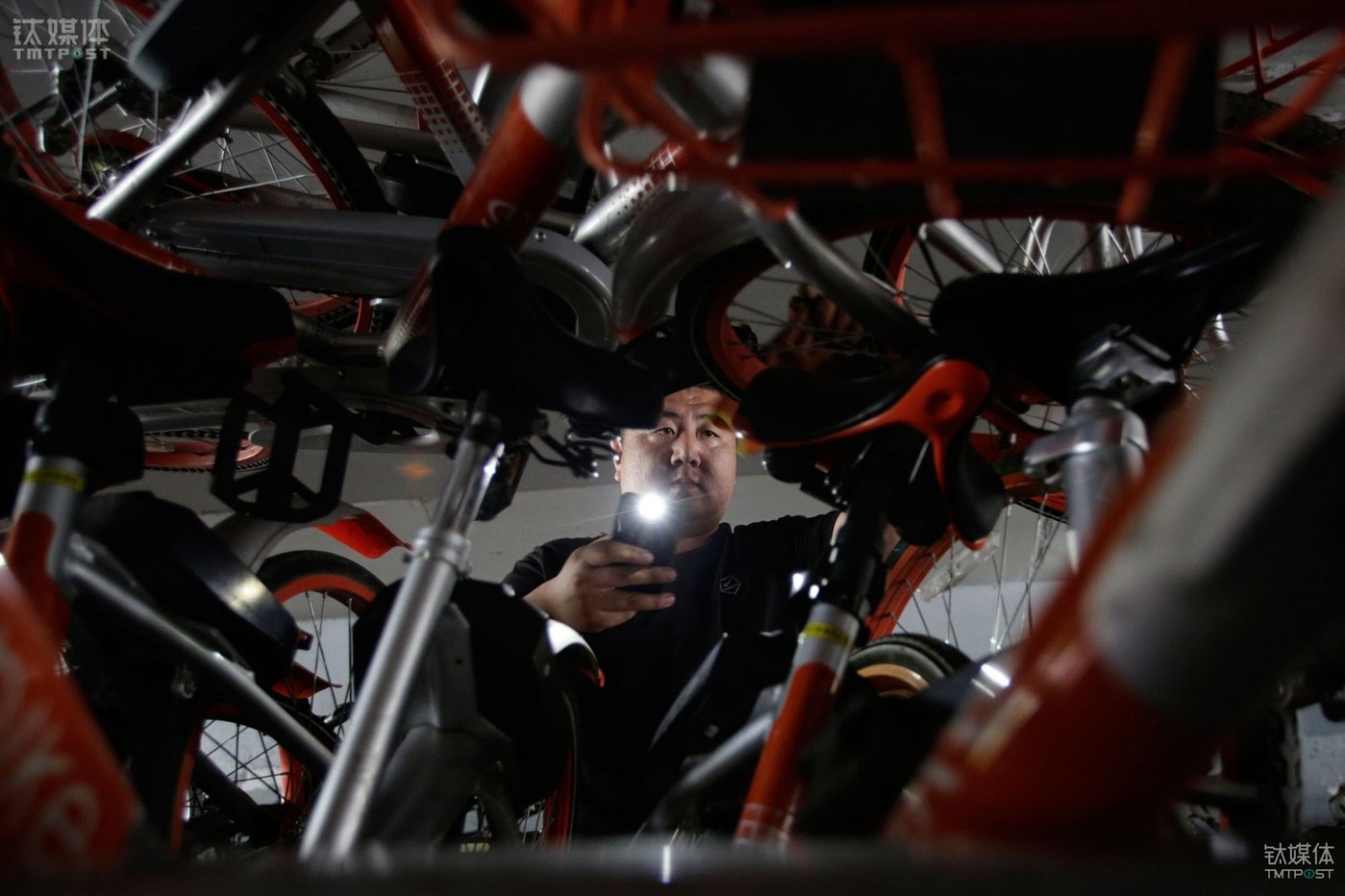 April 24, 2018, Daqiang is checking the loaded bikes under Ciyunsi Bridge. Introduced by his friend, Daqiang came to Beijing from his hometown in Shandong Province six days after the Chinese New Year, becoming a worker of a logistics company that provides manual dispatch services for bike sharing companies. 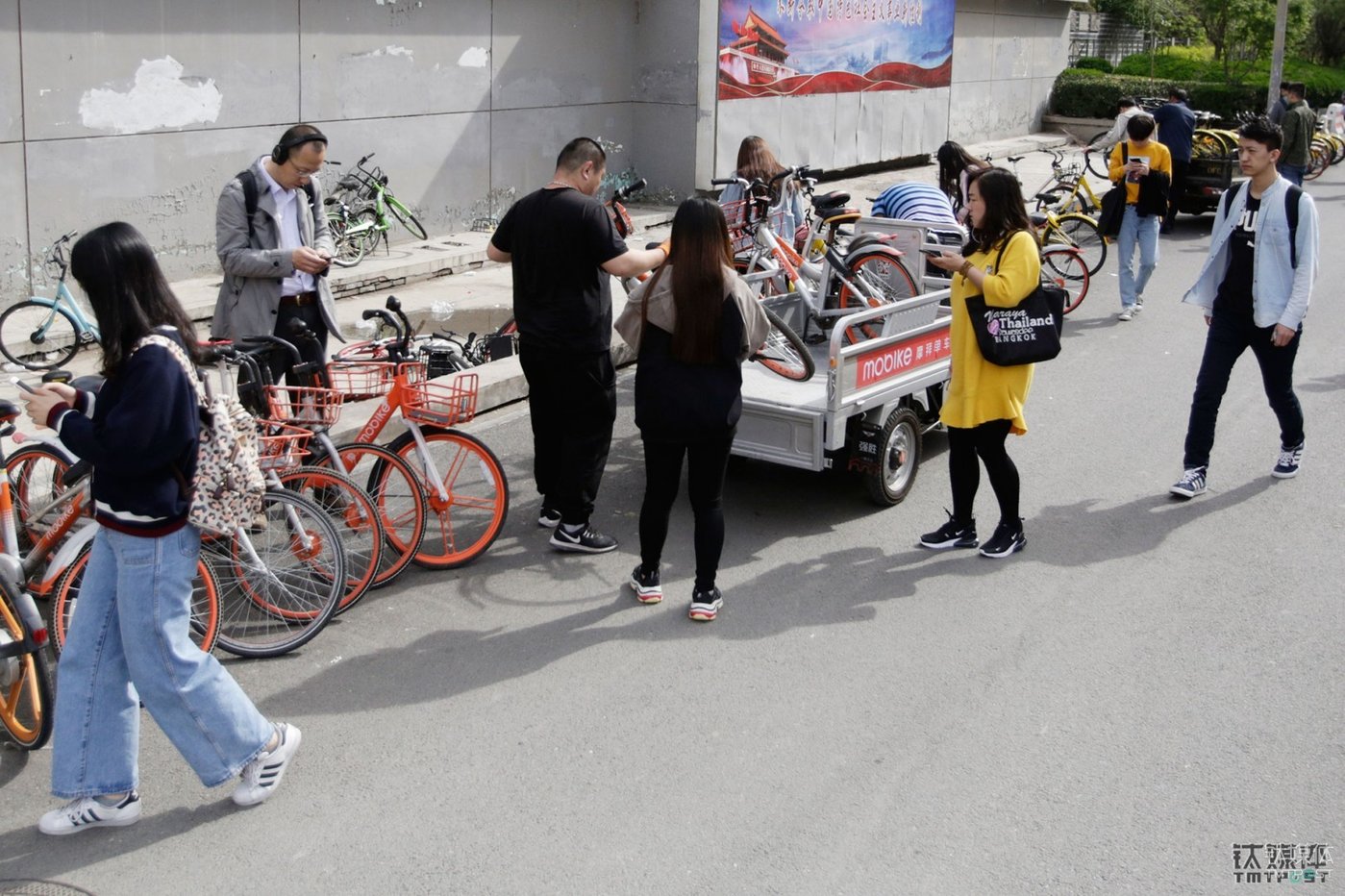 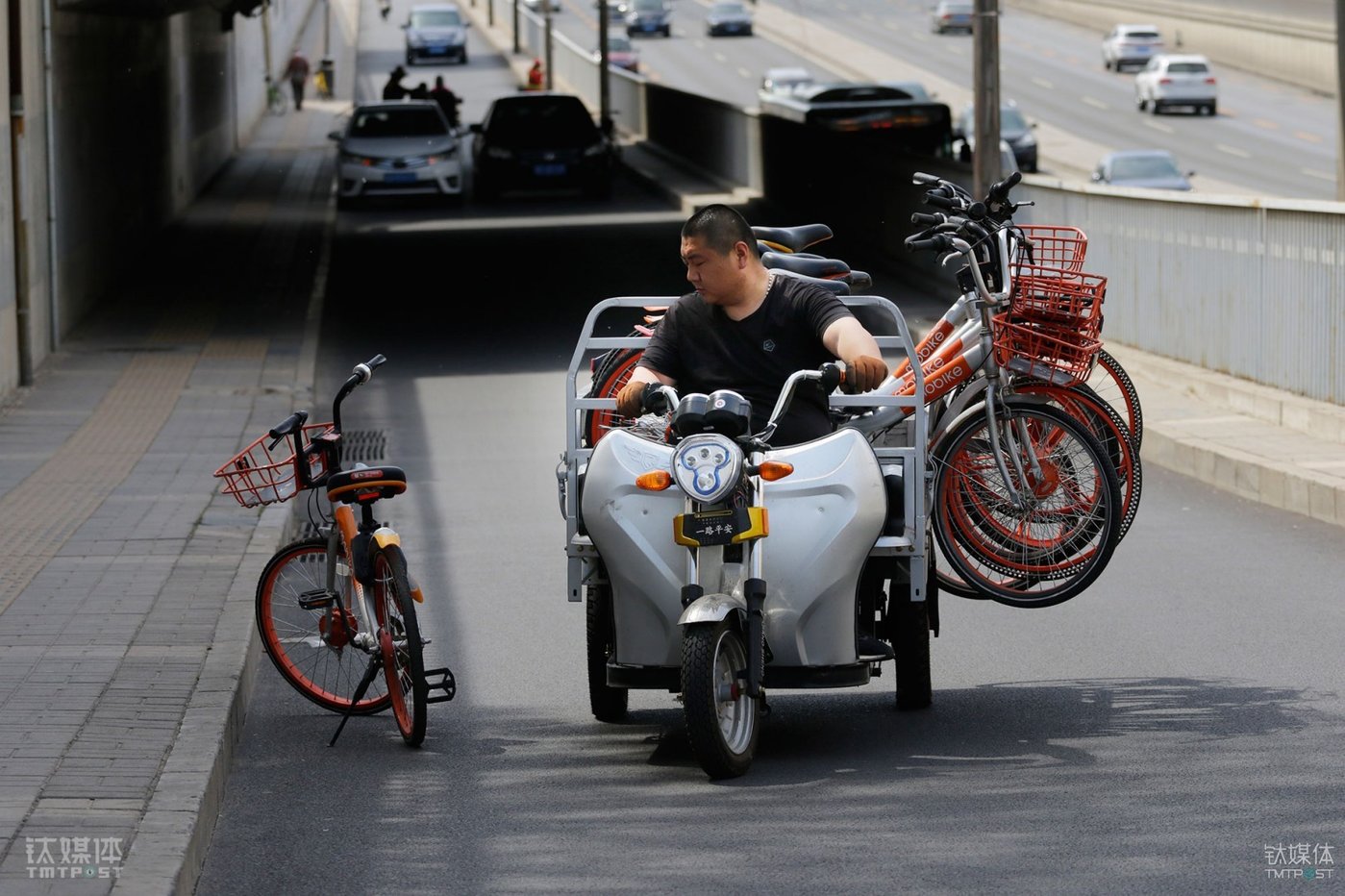 After the morning rush hour, Daqiang is transferred to Chaoyang Beilu to collect the bikes improperly parked by users, and then send the bikes to a nearby subway station.

Daqiang puts a Mobike bike on the tricycle. As regulated by the company, all tricycles must work from 7 a.m. to 2 p.m. everyday, during which each tricycle must deliver 150 bikes. Daqiang scans the codes on all bikes he moves for workload count. 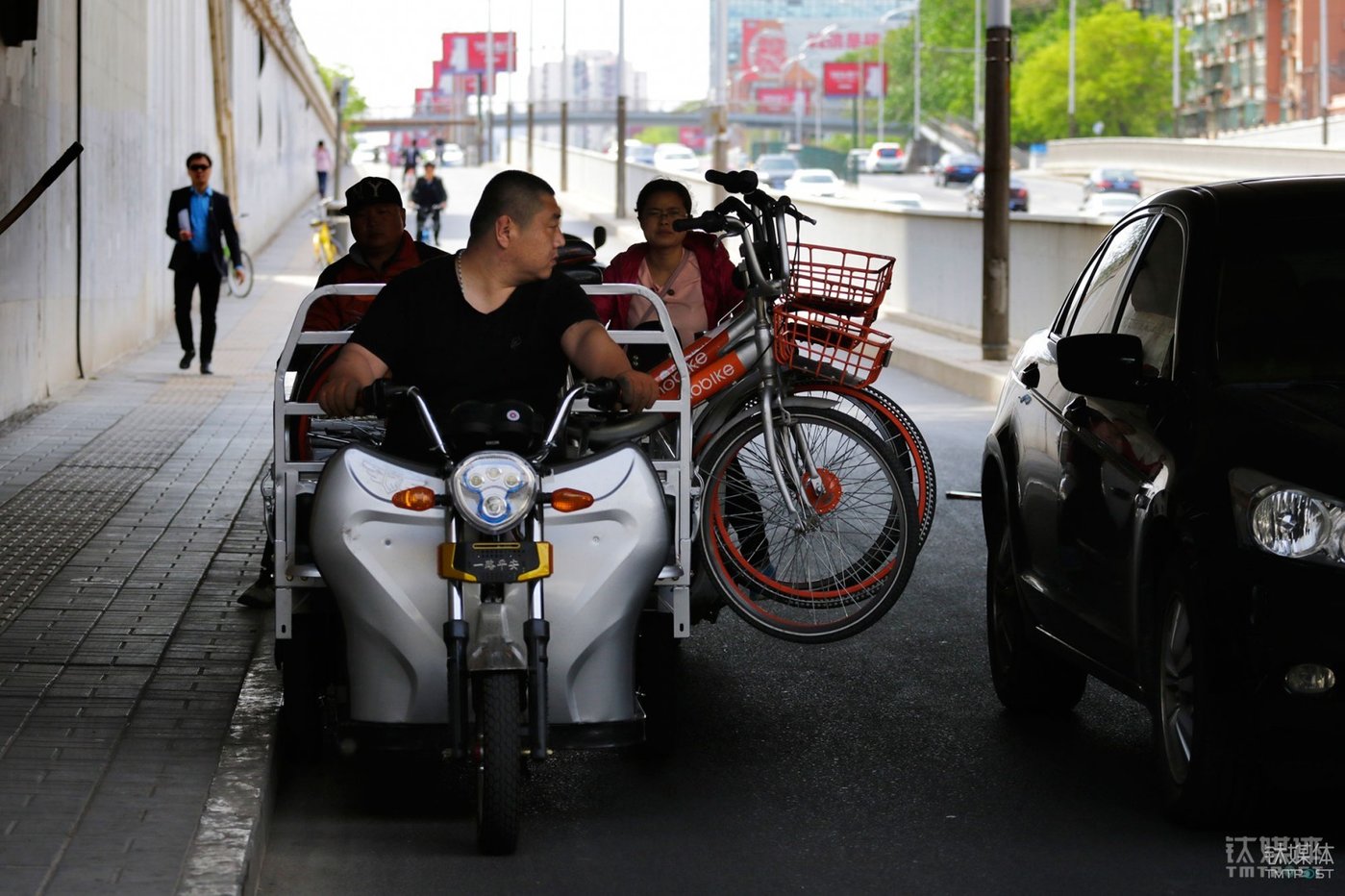 Daqiang slows down when passing by a parked car, checking the distance between his tricycle and the car. As the bikes' front wheels reach out of the tricycle, he's always afraid of hitting pedestrians and other vehicles because the tricycle is not insured, which will cause big trouble if any accidents happen. 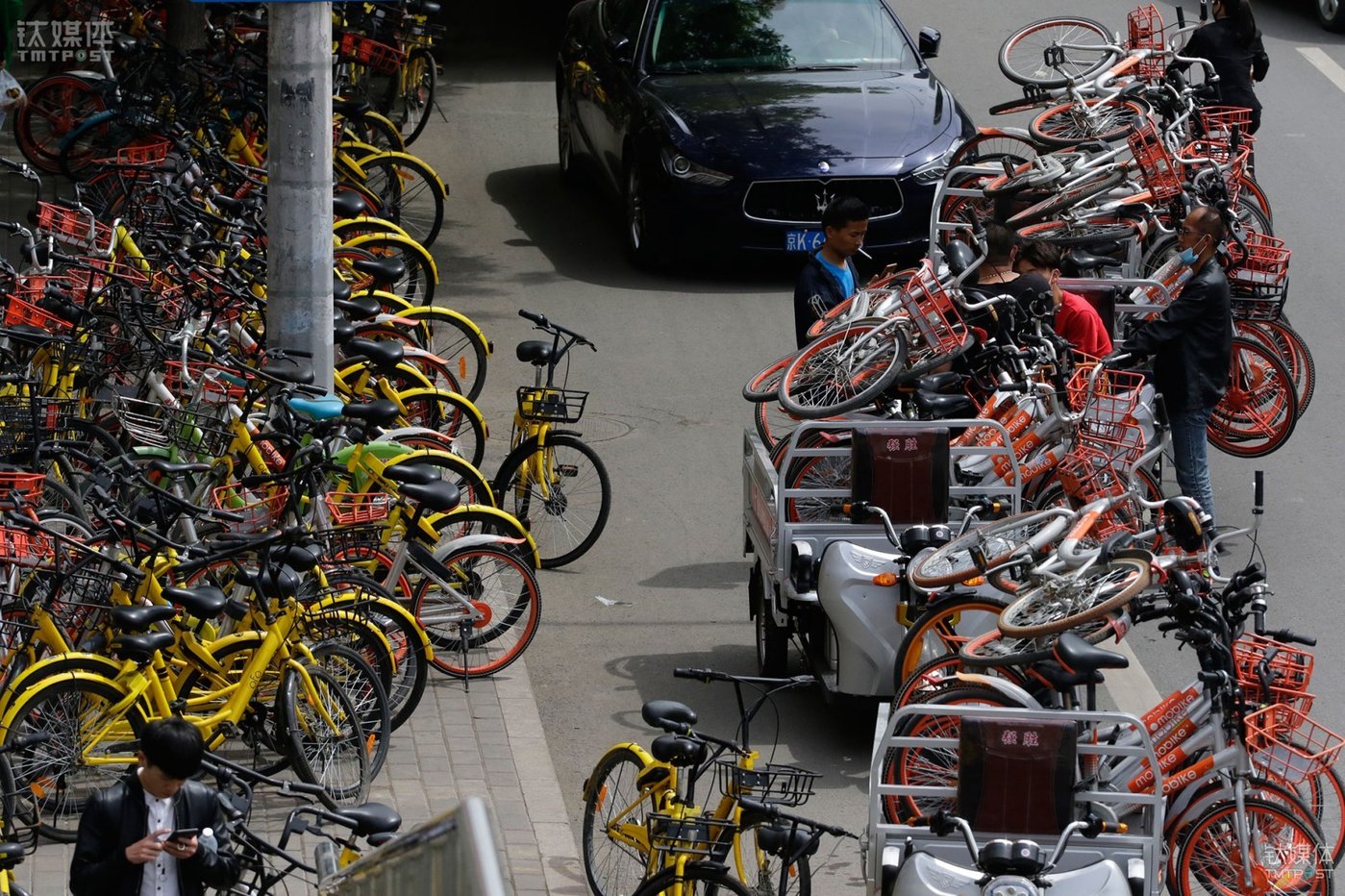 On Chaoyang Road, Daqiang and his coworkers load the bikes before deliver them to destinations. 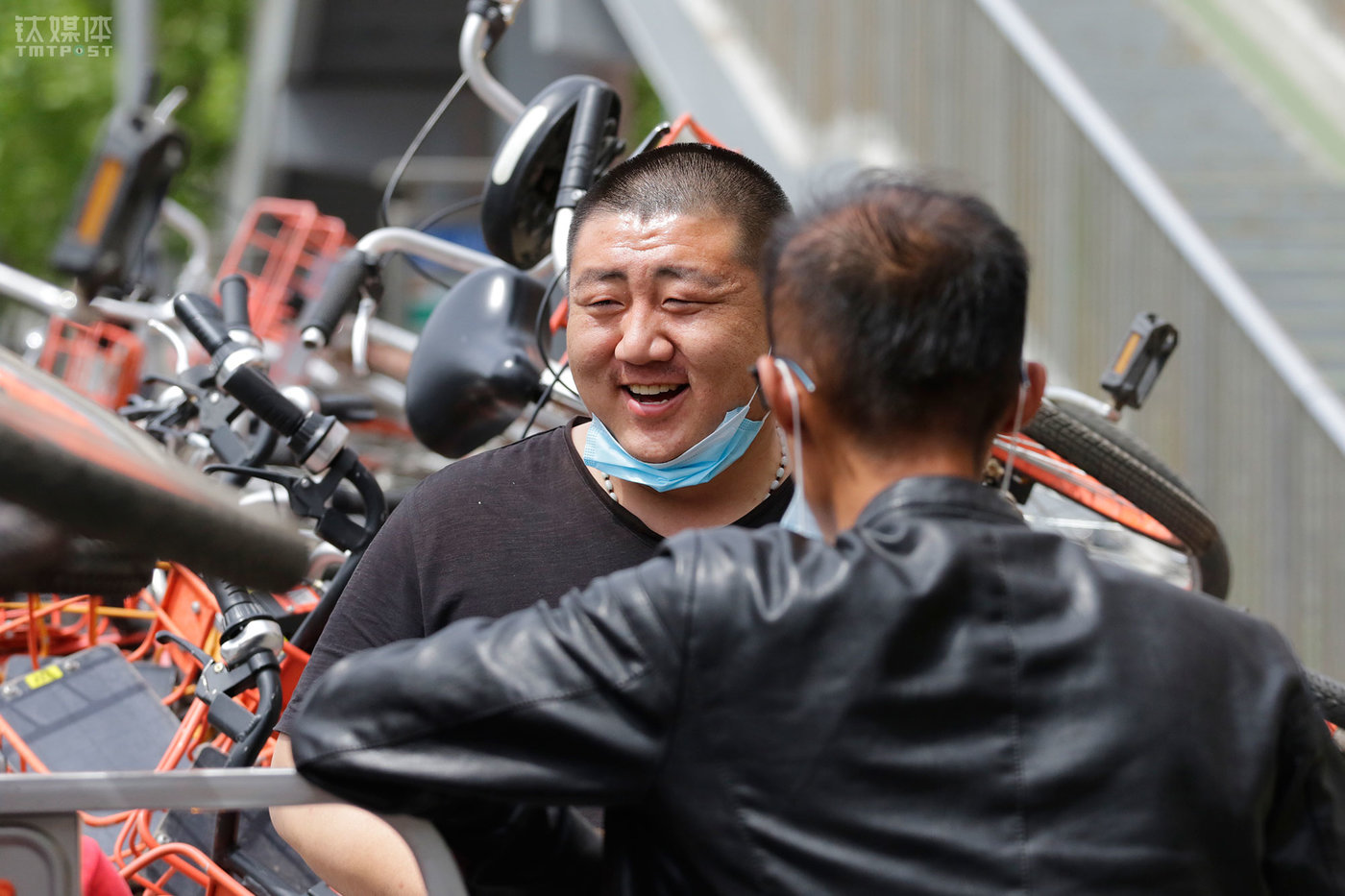 Daqiang get along with his coworkers, who also come from Shandong Province. Extrovert Daqiang likes to joke around with them. "This is not a hard job. All we need to do is to finish the tasks everyday. Actually those hurrying office workers work harder than us," he said. 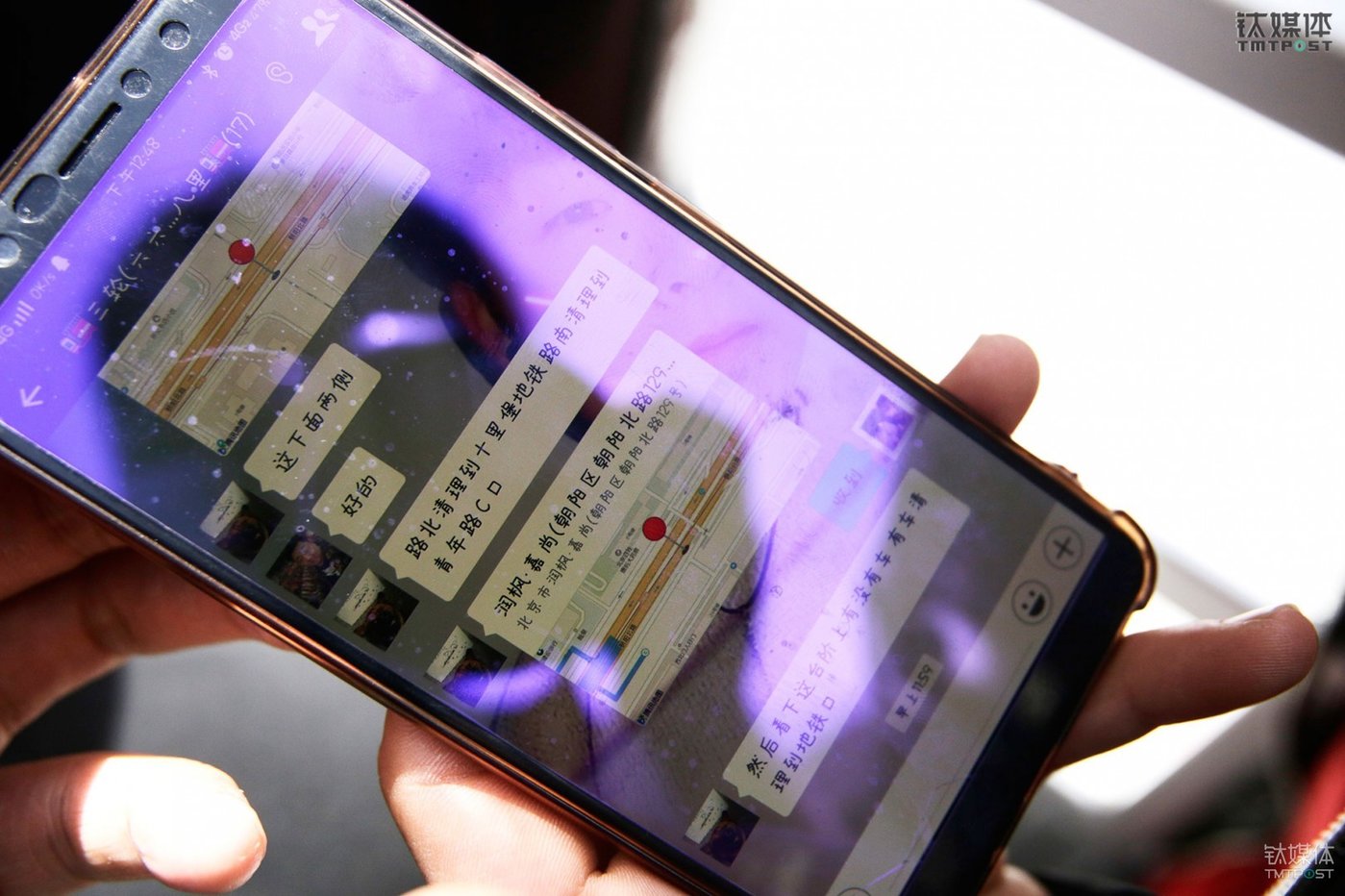 Daqiang's company gives work instructions in the company's WeChat group. The "ferrymen" of shared bikes finish their work according to the instructions. 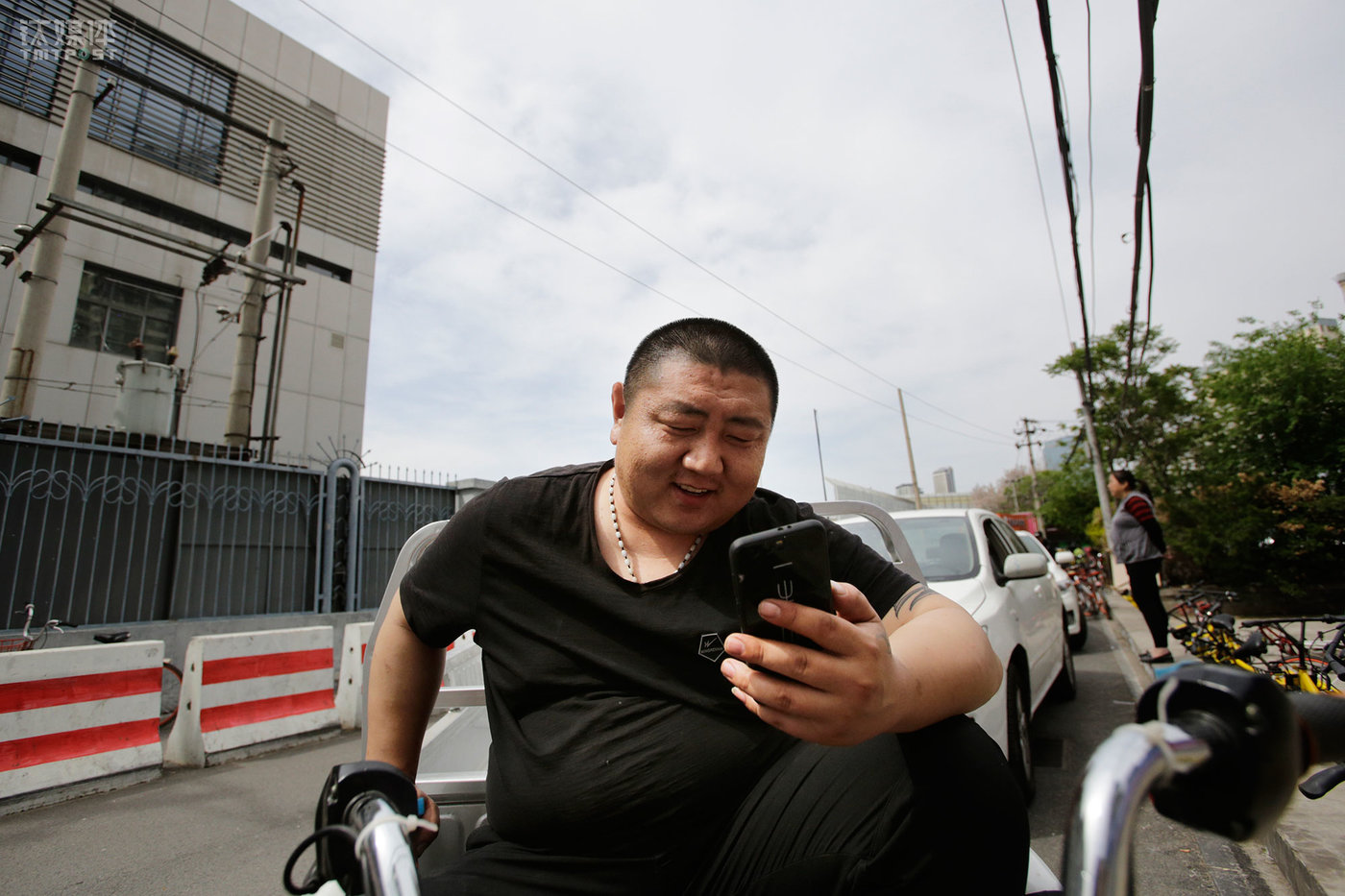 During work break, Daqiang received a video call on WeChat.from his wife, who takes care of three kids in hometown. His oldest son is 11, and the two young sons are twins. The youngest son is sick, so the couple discusses seeing a doctor. "It takes me four hours to drive home, very convenient. I go see my family whenever I miss them or my kids come to Beijing to spend a weekend here," Daqiang says. 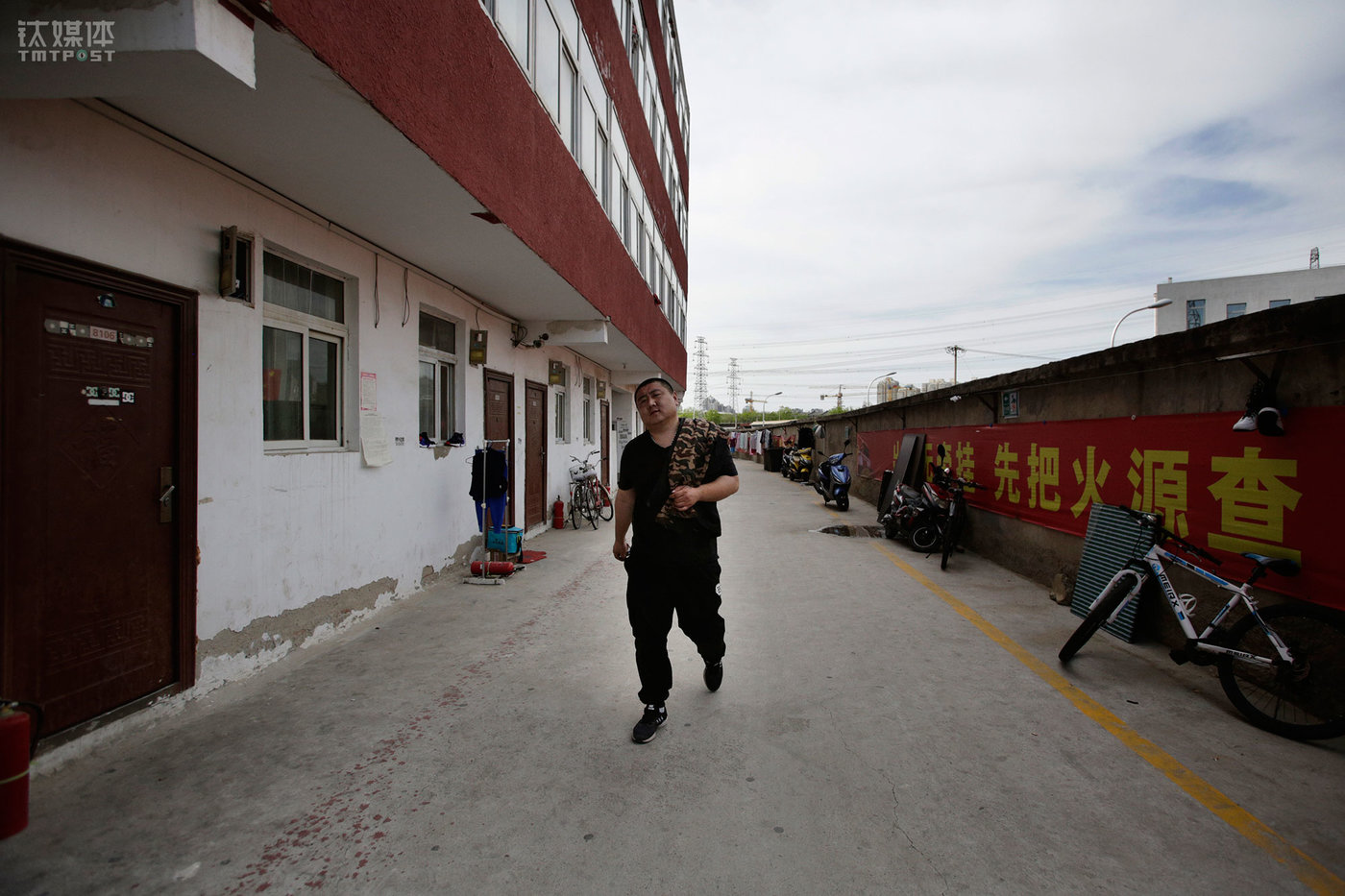 Having finished morning work, Daqiang grabs some fast food and returns to his dorm in Baiziwan area. 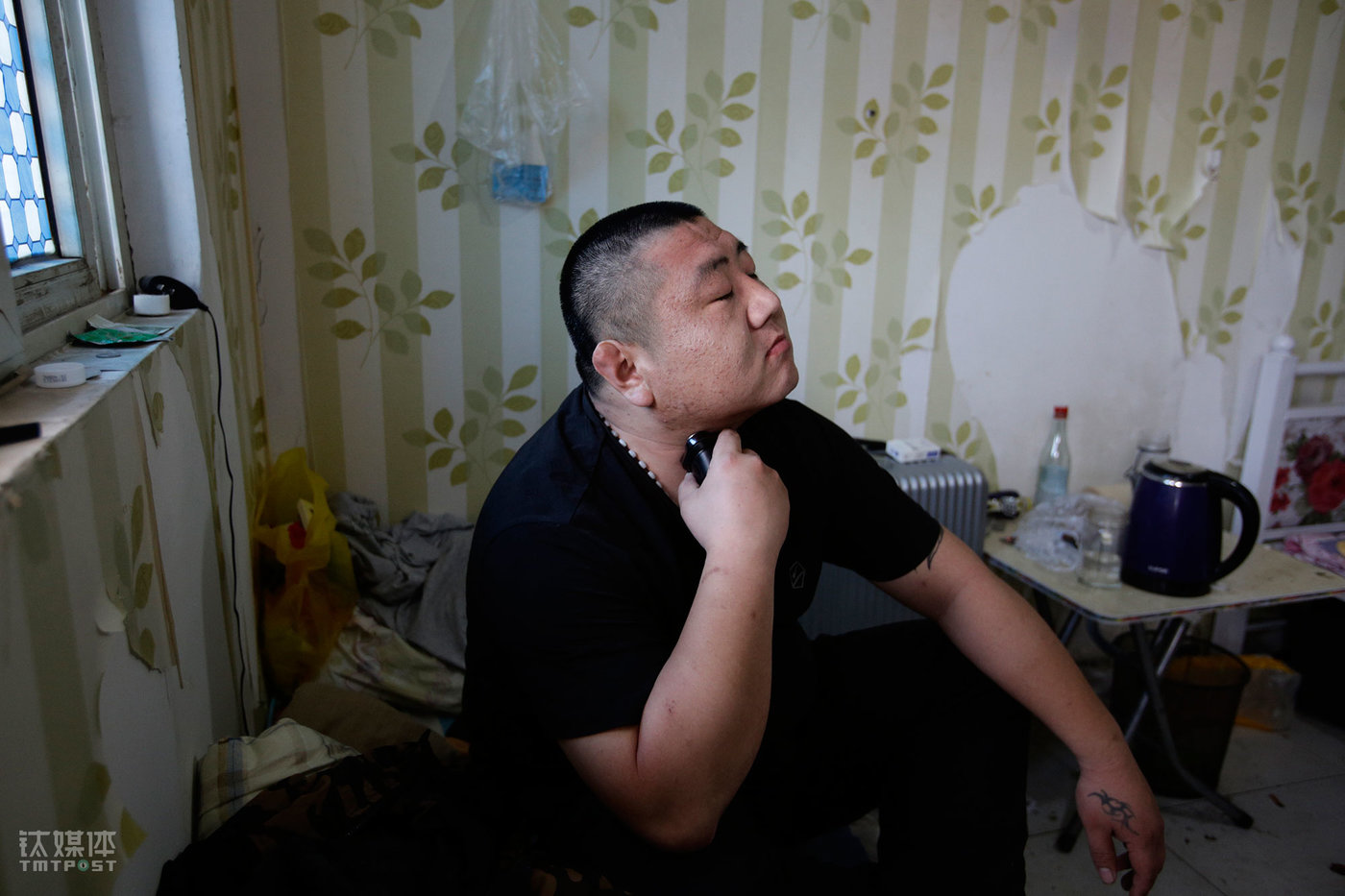 He shaves after a shower. As several coworkers have left for home prior to the May Day holiday, Daqiang will work one more shift in the afternoon. 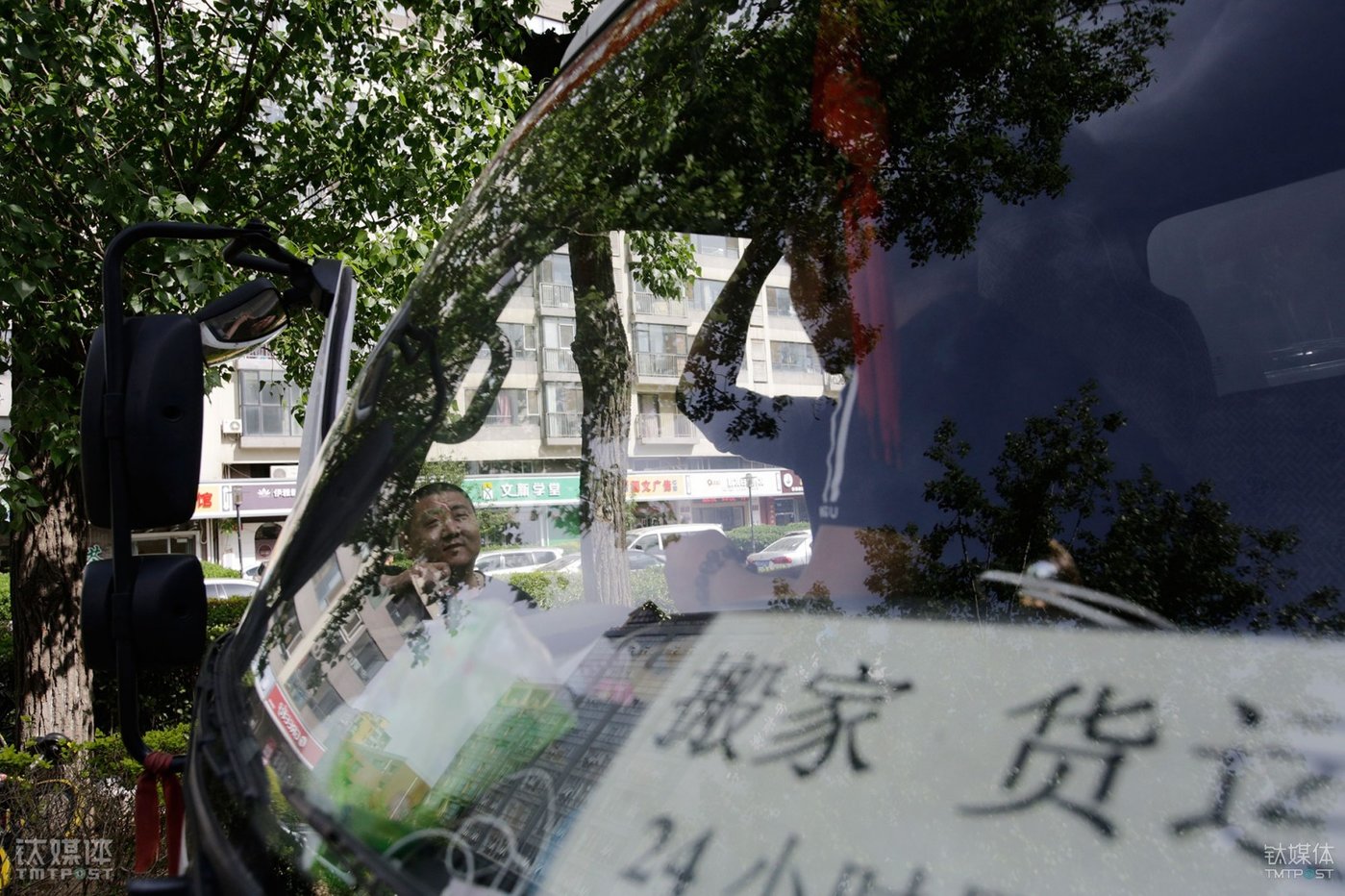 The afternoon shift is from 4 p.m. to 12 a.m., during which the bikes are delivered by vans. Each van needs to deliver at least 180 bikes. Daqiang and his coworkers drive several vans to Bawangfen bus stop in Dawanglu area. Putting his gloves on, Daqiang is ready to work. February 12, 2018 (December 27 on lunar calendar), shared bikes pile up at Bawangfen East bus stop in Dawanglu area. Due to a lack of workers before the Chinese New Year, a similar picture is seen at many shared bike locations in Beijing. 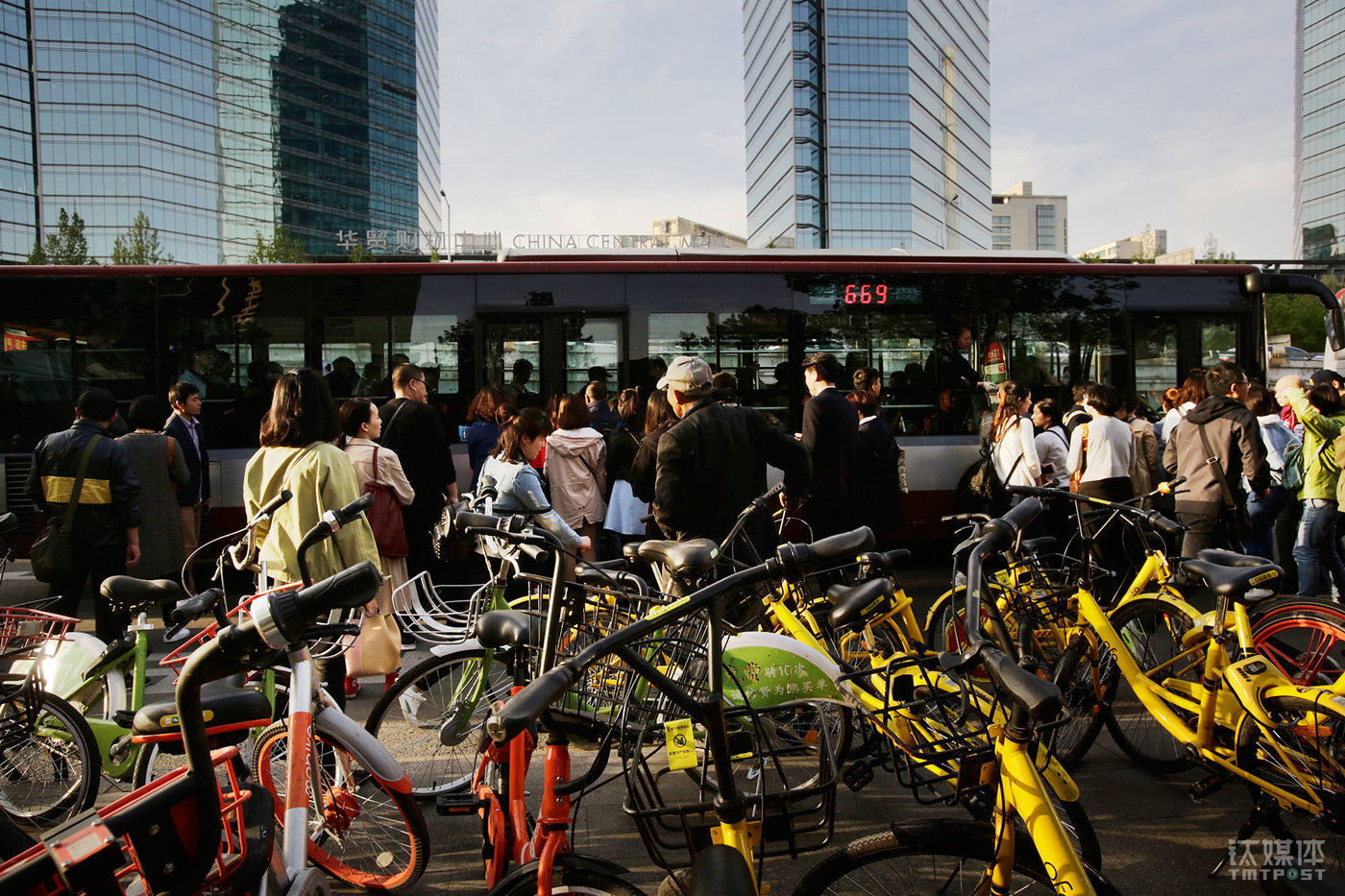 5:30 p.m., April 24. Daqiang's coworkers are loading the van. A commuter chasing the bus drops a bike behind the van before rushing to the bus not faraway. 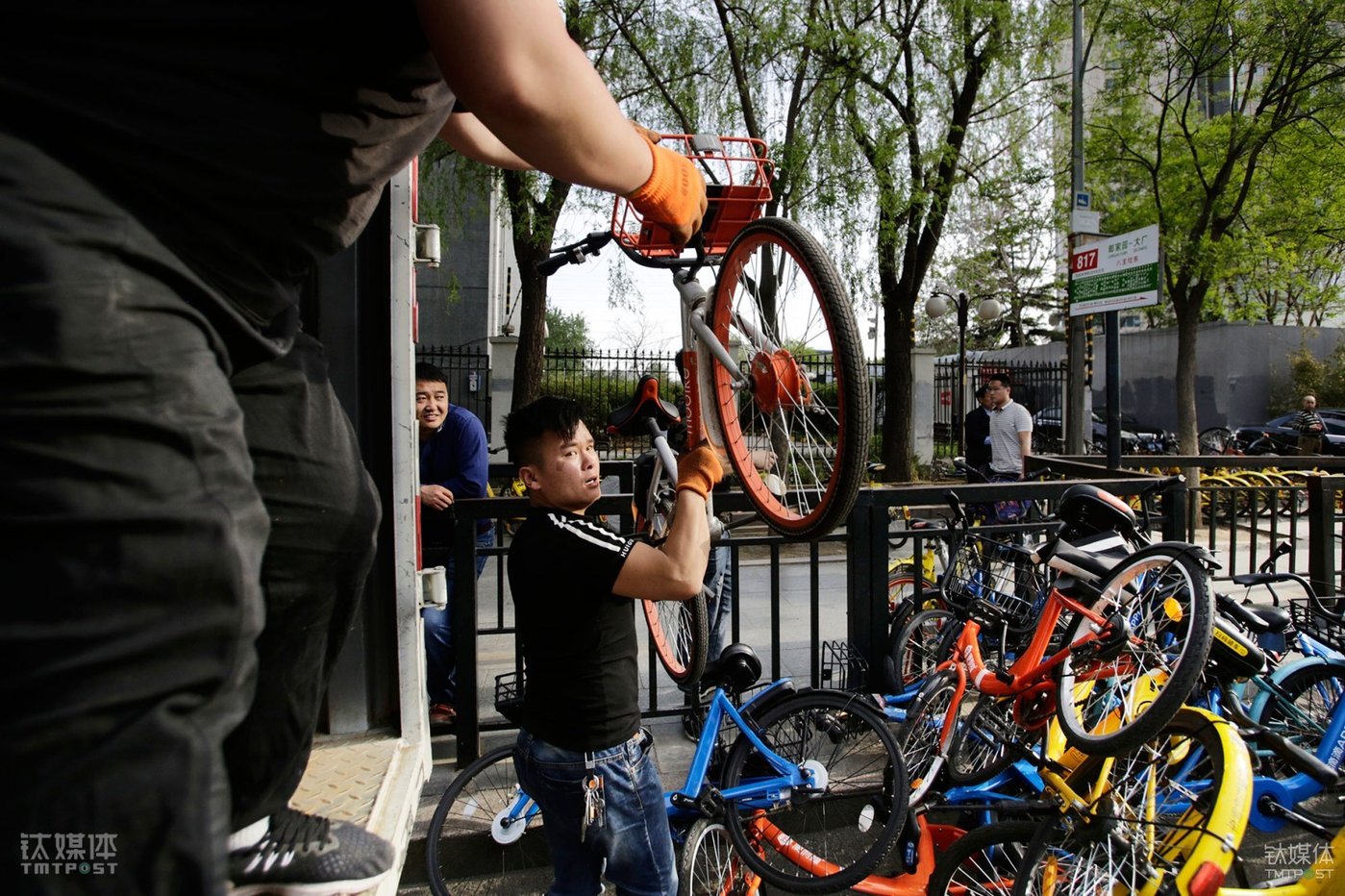 Daqiang and coworkers move bikes. Every worker drives a van, but they help each other fully load the vans before leaving for the destinations. In the afternoon of April 24, shared bikes pile up at Bawangfen E bus stop. "Shared bikes are convenient but many people don't care about others and just park the bikes improperly after using. During the two months of moving bikes, Daqiang has realized the rides don't take care of the bikes. "If everyone improves their manners a little bit, there would be less problems," he says. 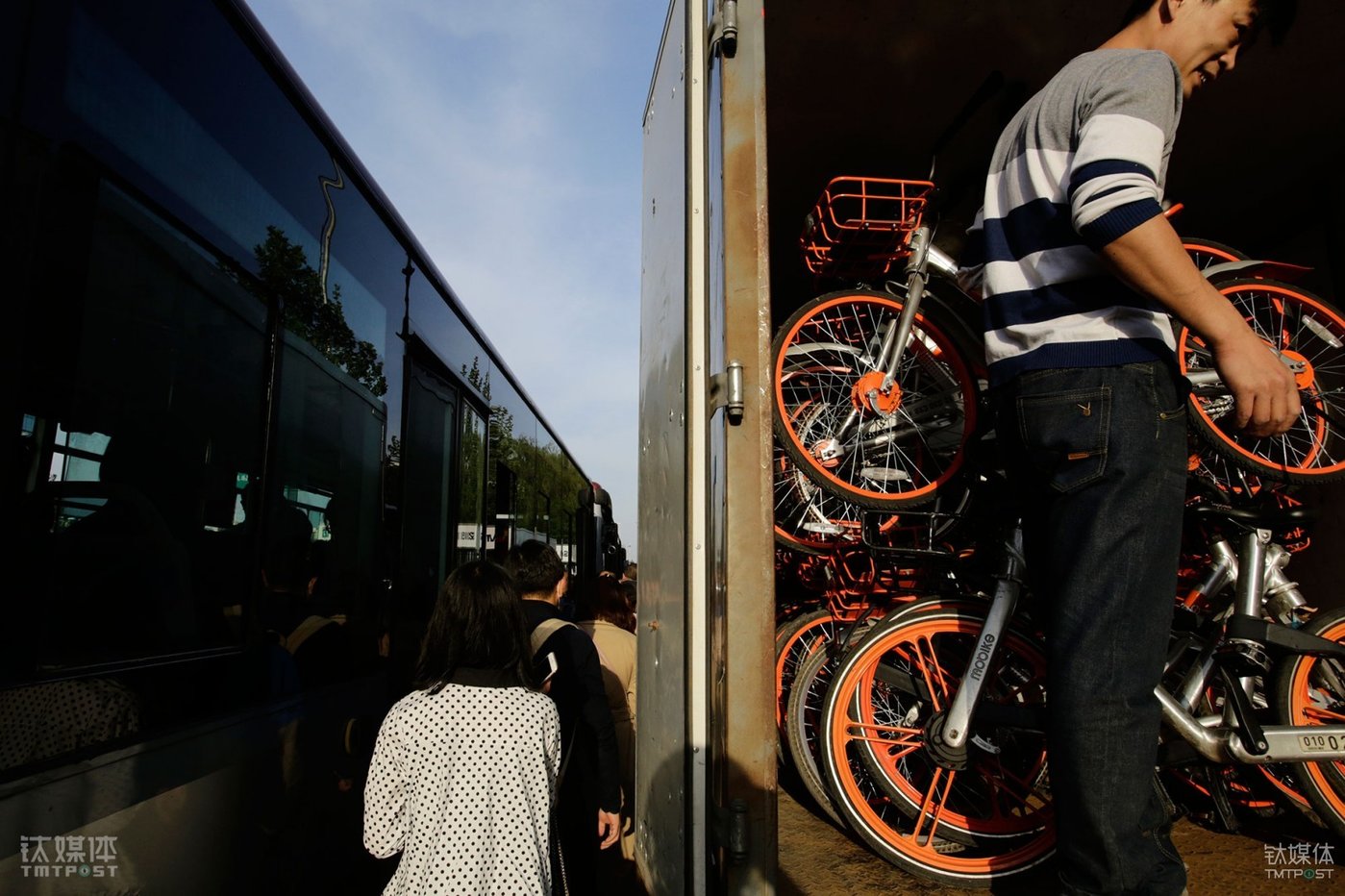 Bawangfen E bus stop, the door of a van fully loaded with shared bikes is to be closed. A bus is parked beside the van, people pass through the narrow gap in line between the bus and the van. Started working at a very young age, Daqiang has driving skill compared to many other coworkers, so he can work two shifts and make more money. "I like working overtime, I have nothing to do in the dorm anyway. Most of us work one shift a day and make over 4,000 RMB per month with free meals and lodging provided. But overtime is quite limited," Daqiang says. Daqiang's regular work is to drive the van from 4 p.m. to 12 a.m., while riding the tricycle is an extra work. 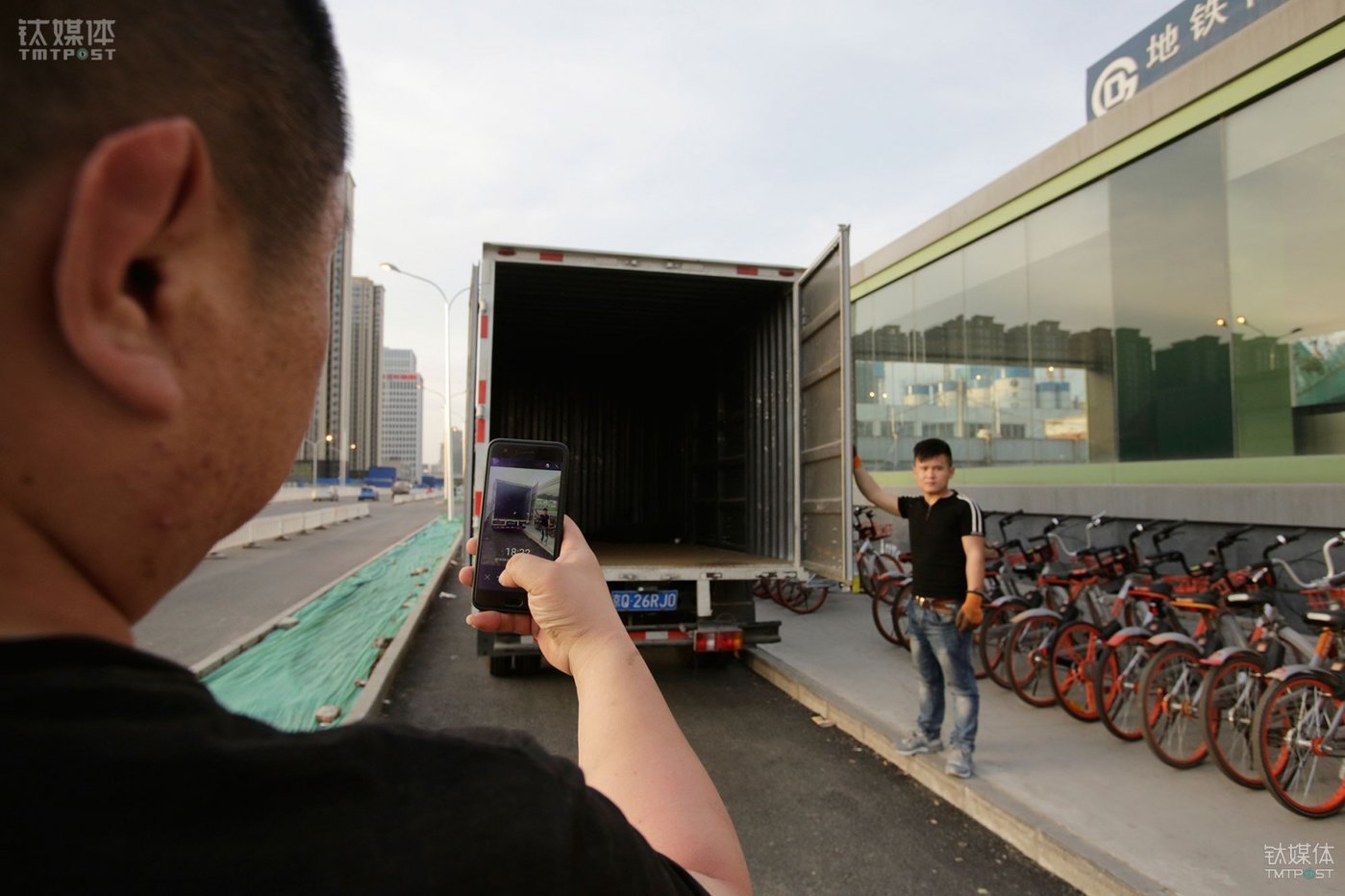 At 6pm, Daqiang drives a van of bikes to Huagong subway station. To finish the job of delivering 180 bikes in the afternoon, Daqiang needs to drive four times with 45 bikes each time. He must take pictures and report in their WeChat group after each delivery. 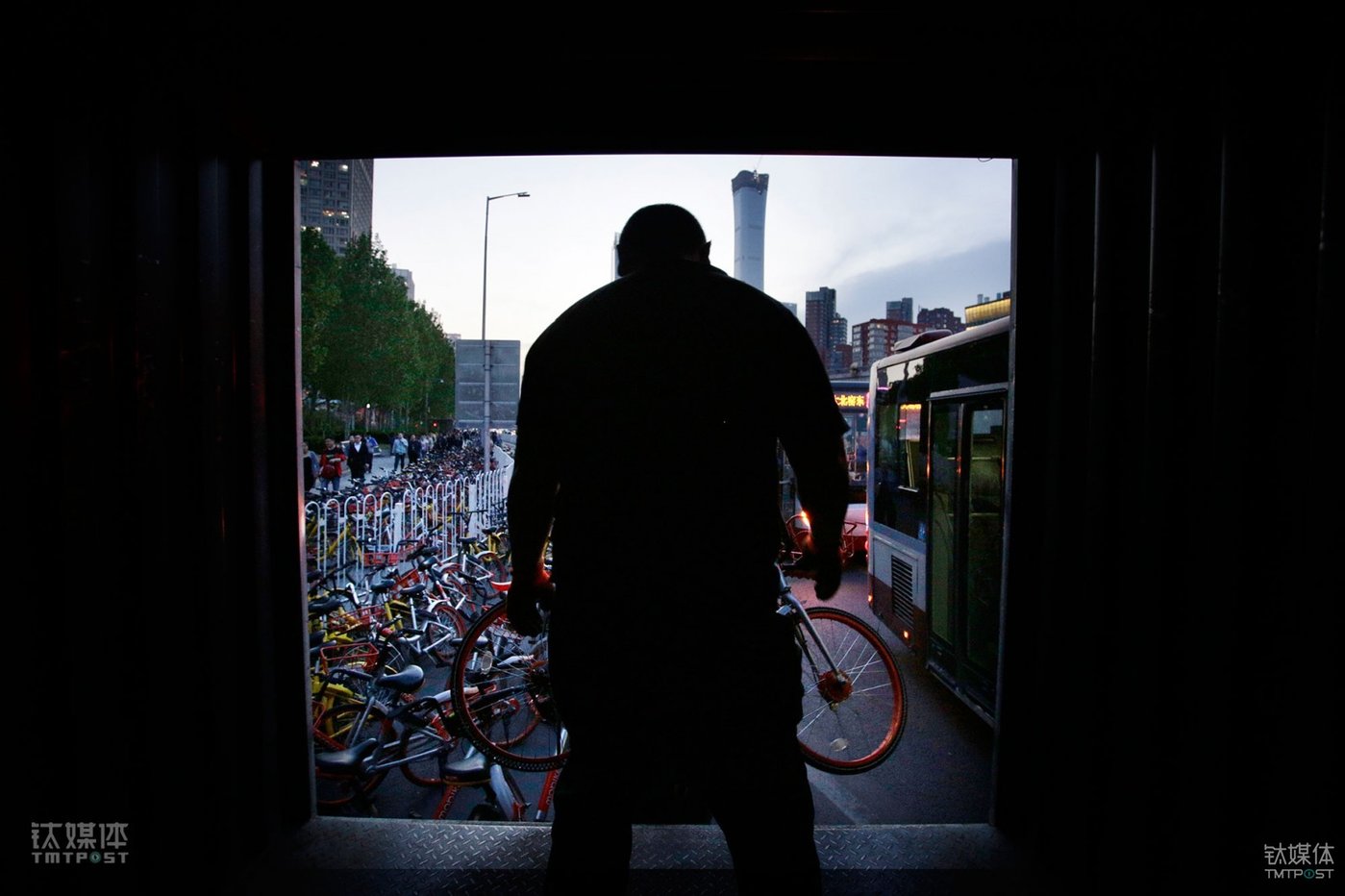 As it gets dark, more shared bikes are coming. The bike loading has to be faster so as not to affect the traffic. Daqiang stands in the van to catch a bike raised by coworker. 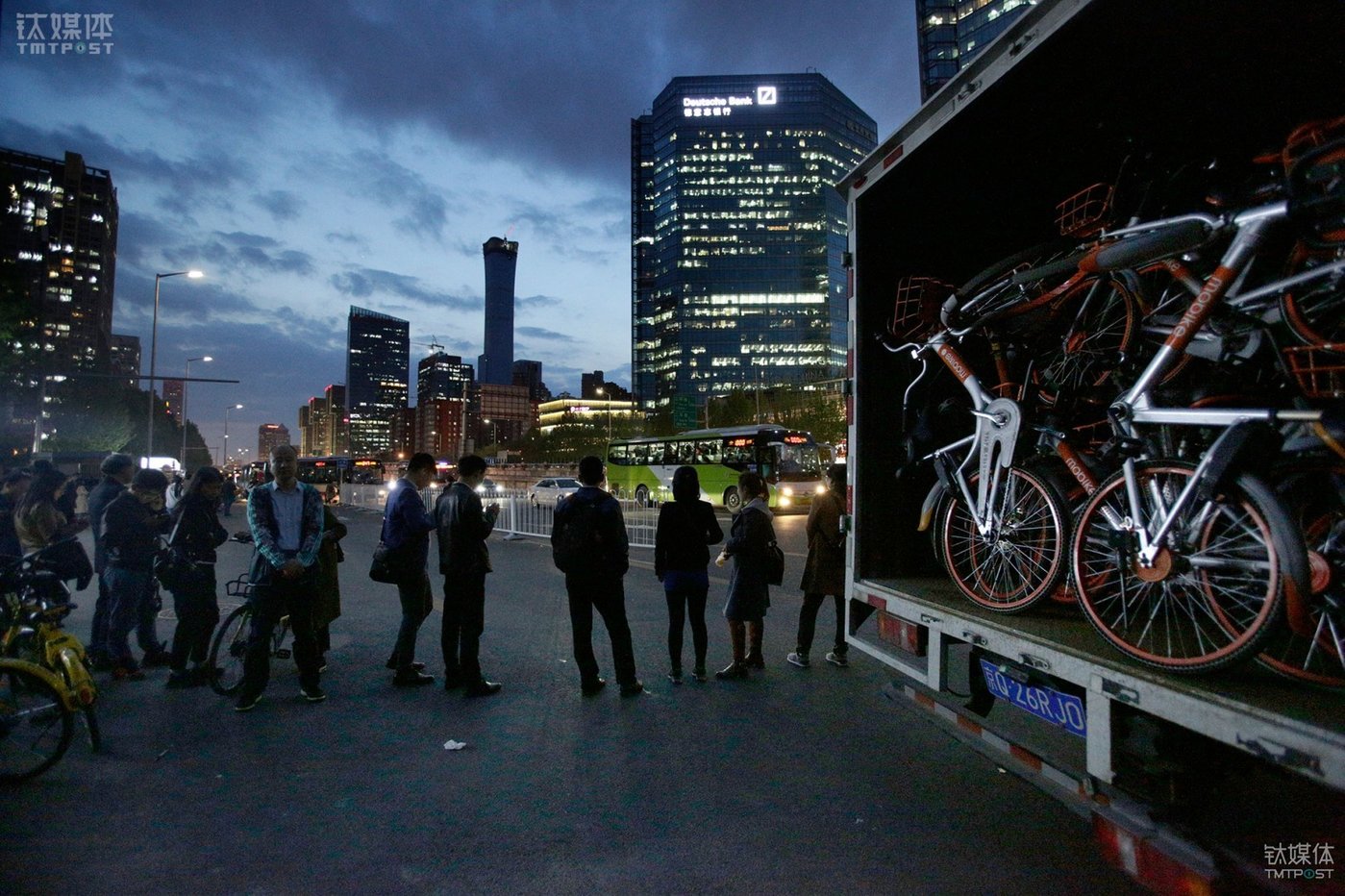 During evening rush hours from Monday to Friday, Bawangfen E bus stop is always crowded and has heavy traffic. The place is easily clogged if the bikes are not timely moved. April 23, people wait for the bus besides a van fully loaded with shared bikes. The background is Beijing CBD. 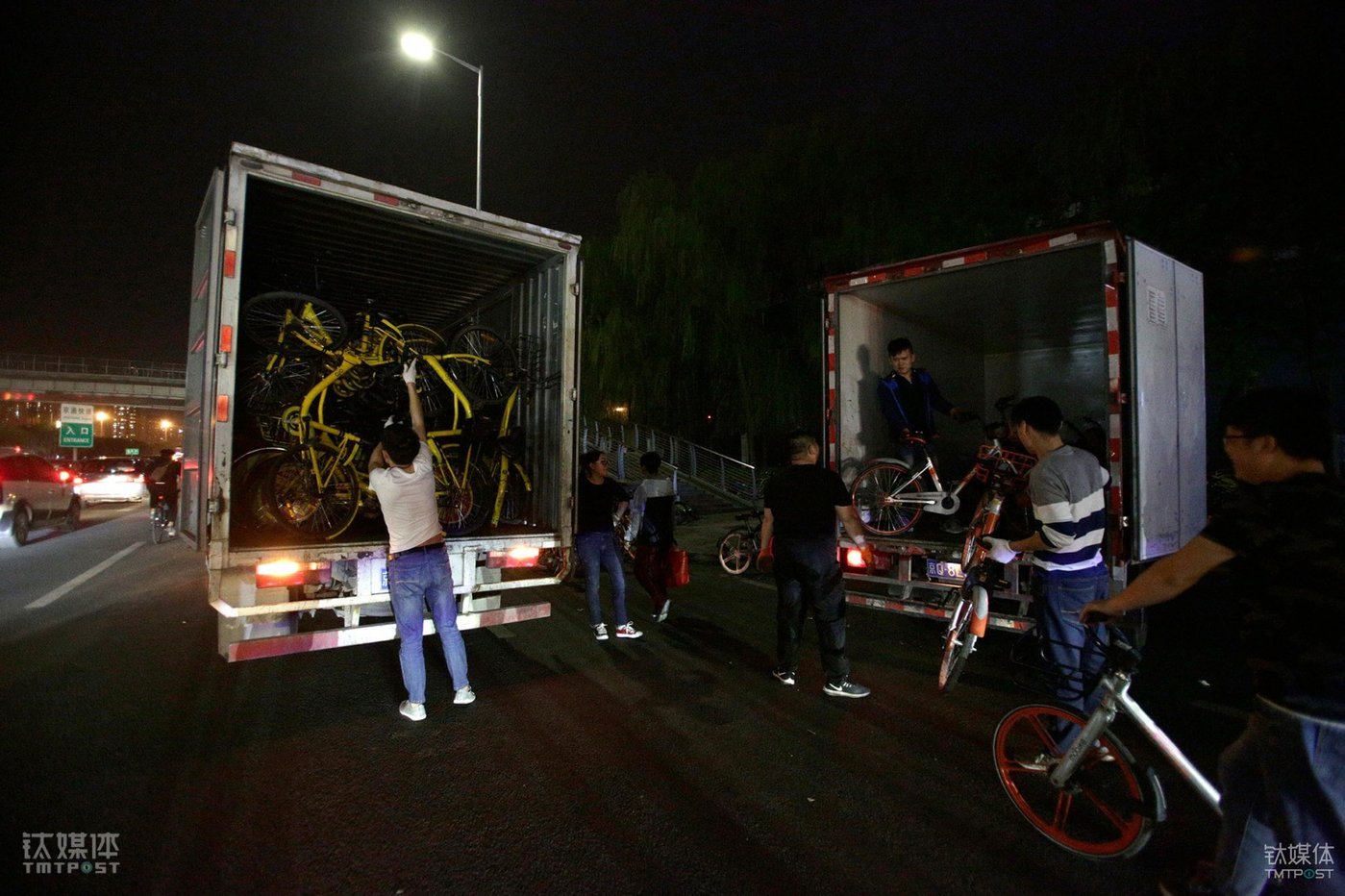 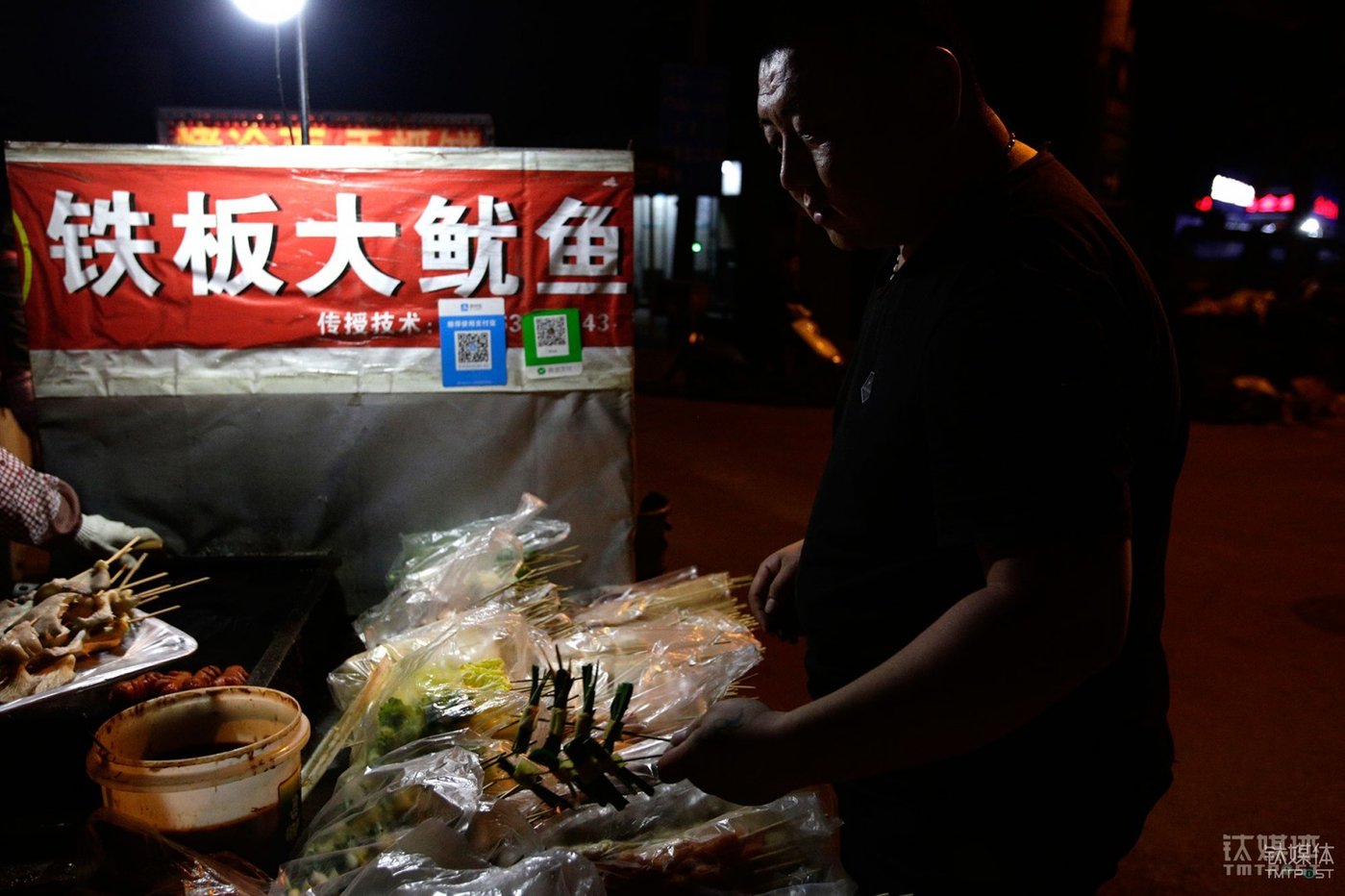 11:30 p.m., Daqiang has finished work and is going take a sip in the dorm with some BBQ food he gets on the street. He says this is a temporary job and two months later he will take his wife to plant fungus in Shijiazhuang (capital city of Hebei Province). "I can make more money if the fungus business goes well," Daqiang says.

TMTPost Image seeks to accurately record those individuals in the Internet start-up tide. The images are real but cannot tell all. The images are free but also can be a trap. In the era of "online," let's discover more……

The article is edited by @Yi LIU (Email: yiliu@tmtpost.com;  Mobile/WeChat: +86 13911703028). The  Chinese version article is published with authorization from the author @Zack Chen, please note source and hyperlink when reproduce.