My Robot Workmates and I | TMTpost Focus

E-commerce warehouse operator Hu Hongyang calls the robots working alongside him his “colleagues”, and he really trusts them. Will his robot colleagues replace him one day in the future?

【Copyright statement: The “Focus”column of the TMTpost endeavors to accurately record individuals of the Internet era. All rights reserved.】

4'05” video clip: How AGV robots work in an e-commerce warehouse

The e-commerce logistics and warehouse revolution, the beginning of which was marked by the acquisition of KIVA by Amazon, has already landed in China's e-commerce warehouses. AGV warehouse robots are the best bargaining chips of this logistics revolution, completely replacing the traditional “person-to-goods” systems of warehouse picking with the “goods-to-person” systems.

A labor-saving robot which improves picking efficiency is deployed in the warehouse. And it changes the ways humans work.

At the logistics center of Suning in Fengxian District, Shanghai, warehouse operator Hu Hongyang at 3C warehouse has experienced this transition. Before, he spent 70% of his time on picking (daily step count reaching 30,000 steps according to the WeChat fitness tracking app. Try it yourself.); This has completely changed. At the beginning of 2017, Suning started deploying AVG logistics robots in the 3C warehouse and has achieved using logistics robots for all picking of 3C products. Now daily WeChat step count of Hu Hongyang has decreased to “below 5,000.”

Hu Hongyang calls the robots working alongside him his “colleagues.” He really trusts these colleagues and believes that these robot colleagues may “replace him” one day so his hands can be freed.

In the 71st episode of TMTpost Focus column, TMTpost reporter visited the warehouse and recorded the story of an e-commerce warehouse operator and his robot colleagues.

May 11, 2018, Shanghai, Number two picking station, 3C warehouse of Suning Fengxian logistics center. Operator Hu Hongyang is waiting for the AGV logistics robots which are queuing to transfer products to the picking area. In this warehouse, there are seven picking stations especially designed for logistics robots and the picking area of each station can accommodate ten robots queuing simultaneously. After a robot completes a picking operation, it returns the pallet to the storage area. In the storage area, there are 1058 racks (including pallet and grid racks.) The lines and circles on the ground are the trails left by the moving robots. Inside these circles, QR codes are installed as the navigational tools for robots. 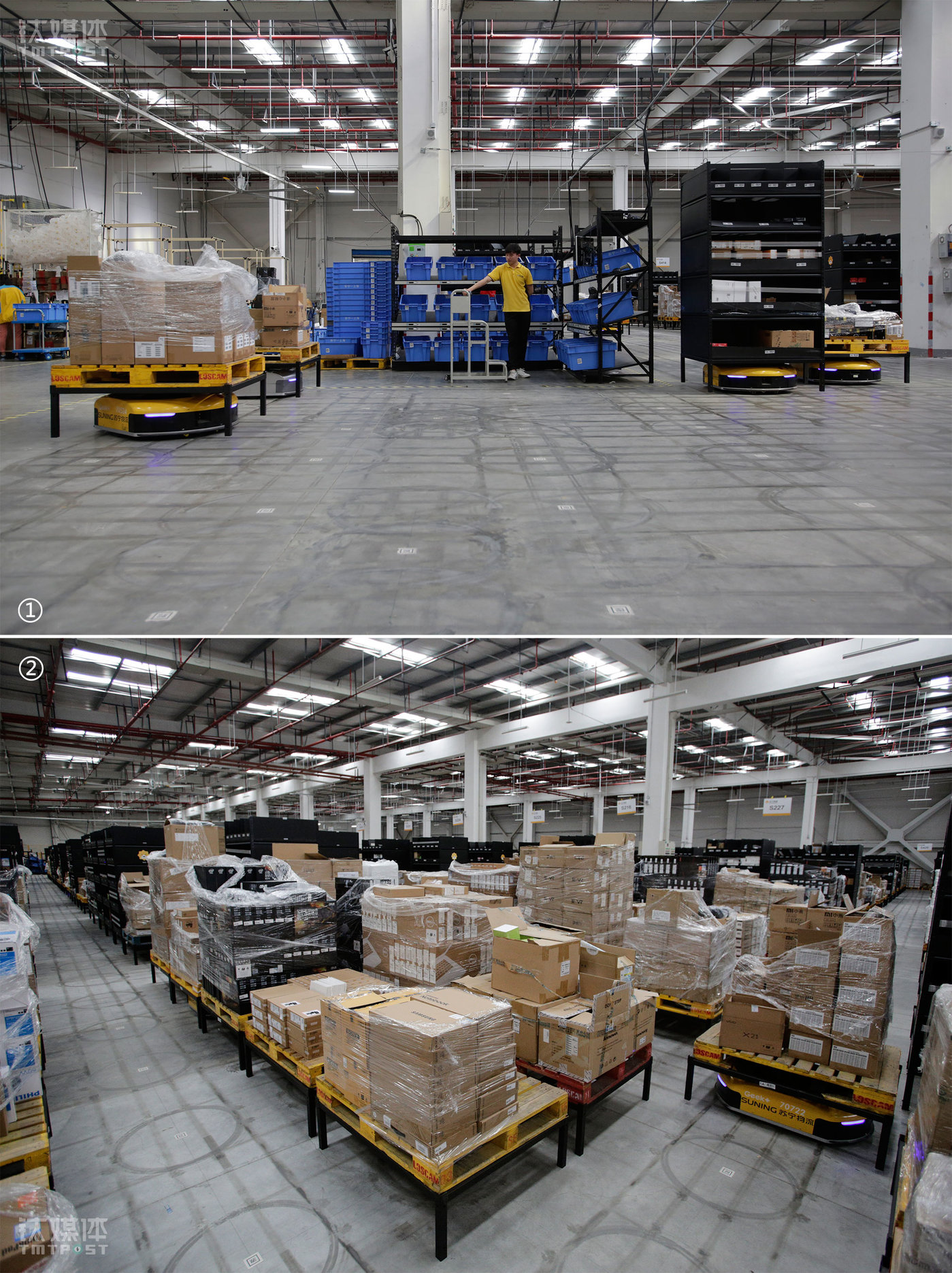 ② ↑After a robot completes a picking operation, it returns the pallet to the storage area. In the storage area, there are 1058 racks (including pallet and grid racks.) The lines and circles on the floor are the trails left by robots in operation. Inside these circles, QR codes are installed as the navigational tools for robots. 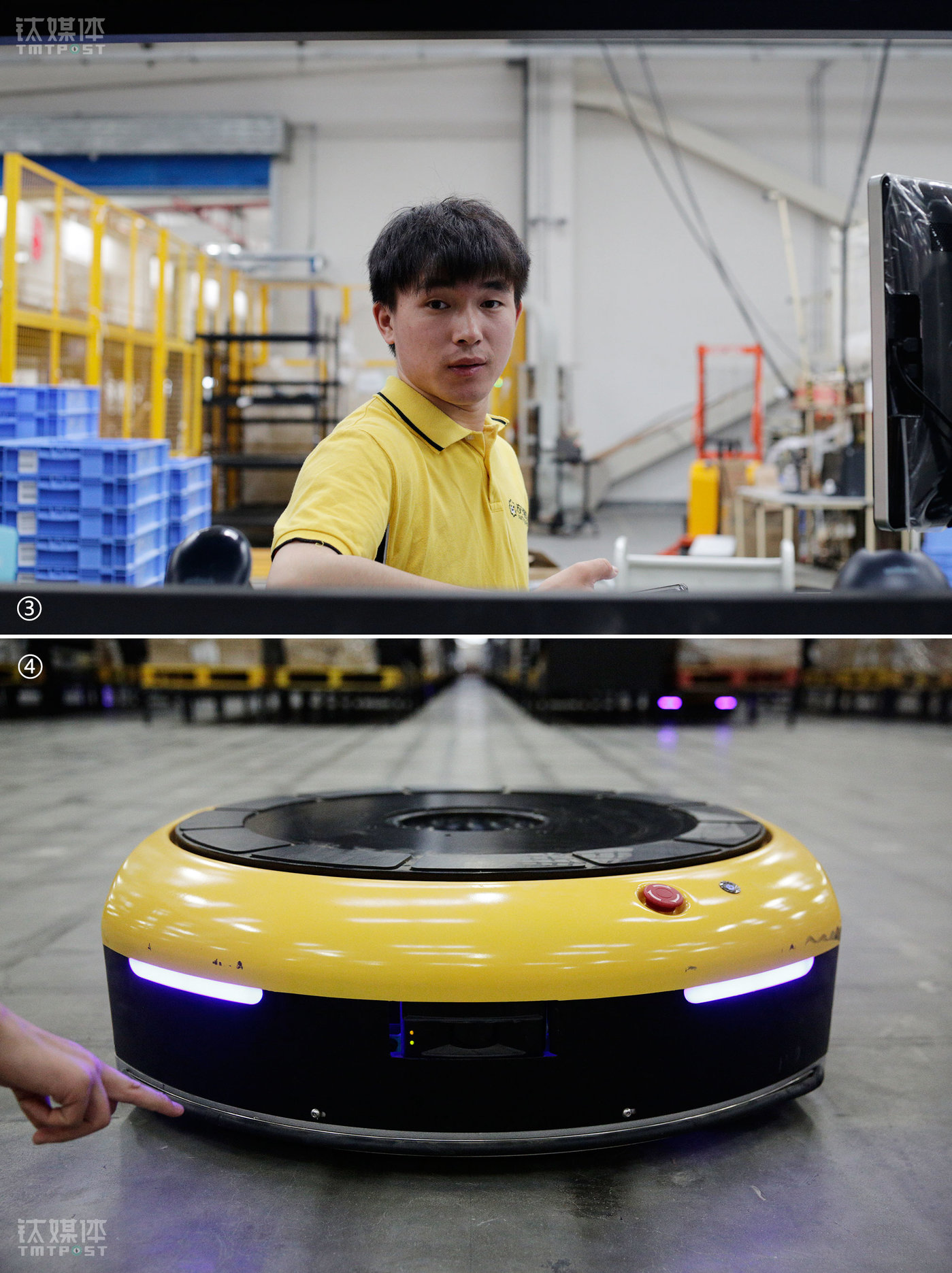 ③ ↑ Operator Hu Hongyang comes from Anhui province and is 24 years old. This is his first job. Since his graduation, he has worked in this warehouse for more than a year. Hu is responsible for picking, counting and shelving, which all require close cooperation with the robots. He treats these robots as his colleagues.

④ ↑ The robot colleague comes from Beijing and was “born” in September 2017. It measures 1.04mX0.82mX0.28m and weights 180Kg, with a maximum load of 800 kg and maximum load measures of 1.2mX1.2mX2.4m. It’s speed without load is 1.6m/s and 1.3m/s when loaded. It depends on laser, radar and infrared for obstacle avoidance. In the picture, the obstacle avoidance component is at the center of the black panel. On an ordinary day, there are 50 AGV robots and on really busy days, the warehouse can request more robots if needed. 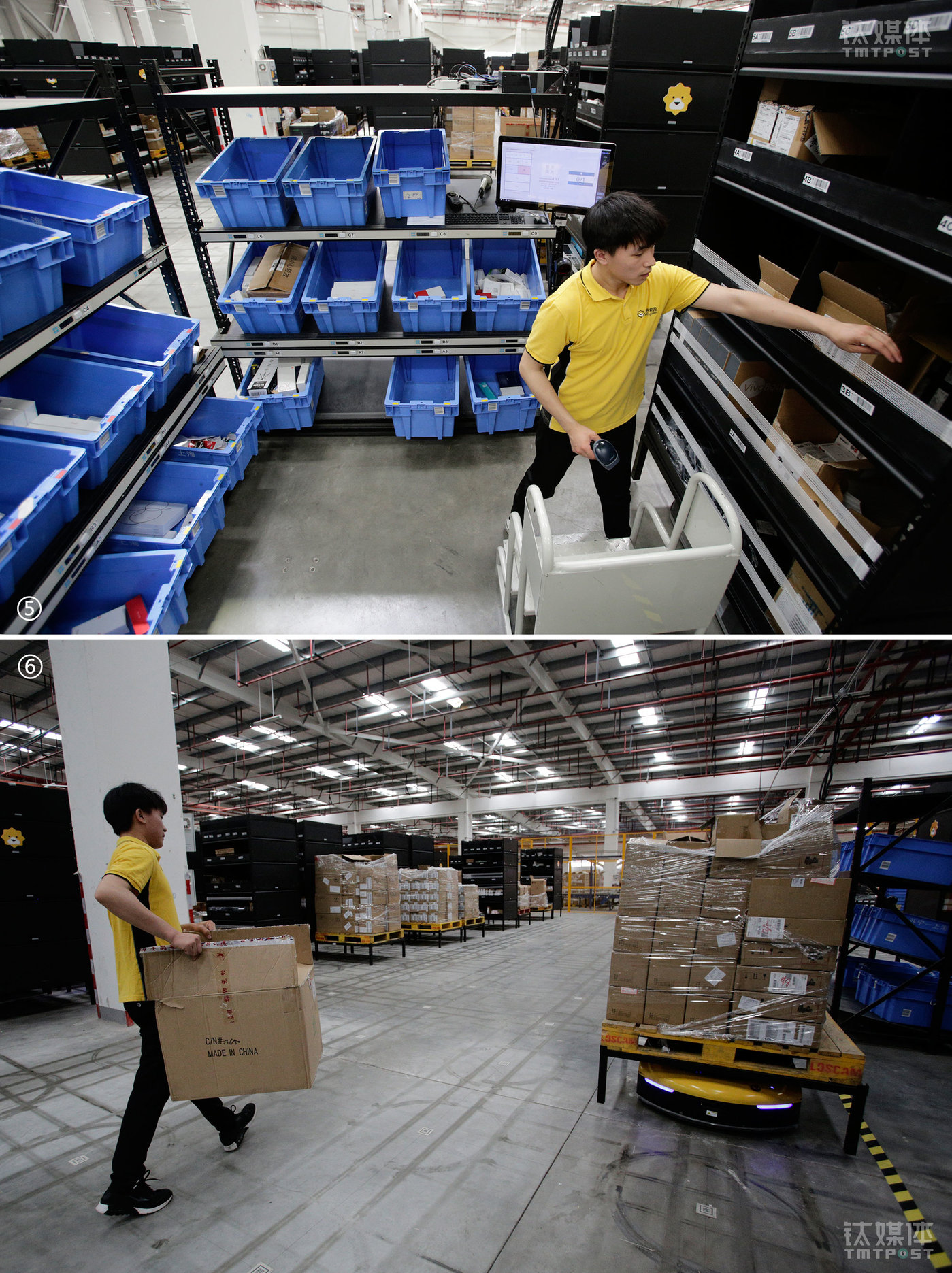 ⑤ ↑“Before the implement of robots, I would be running around racks and perform picking with a RF scanner. Now I just wait for the robots to bring the racks to me at the work station.” The Suning order system interfaces with the warehouse robotic system. Hu Hongyang gets orders from the system and the robots transfer the racks stocked with the corresponding goods under instruction to the workstations. Then Hu picks the products from the racks according to the prompts on screen and throws them into the blue bins. Afterwards, the robots return the racks back to the storage area. The WeChat step count shows that before the implement of robots, for picking, Hu walked 30,000 steps daily. Now he only needs to walk 4,000 steps while the number of products picked has quintupled.

⑥ ↑ Hu Hongyang picks up a box of products fallen from the pallet and is going to perform re-count and re-entry. Initially, he doubted about robots. He was unsure whether they could transfer the racks without errors and also worried that he may be run over by them, or they might crash into each other. However, the excellent performance of the robots has completely dispelled his worries and now he completely trusts his colleagues. 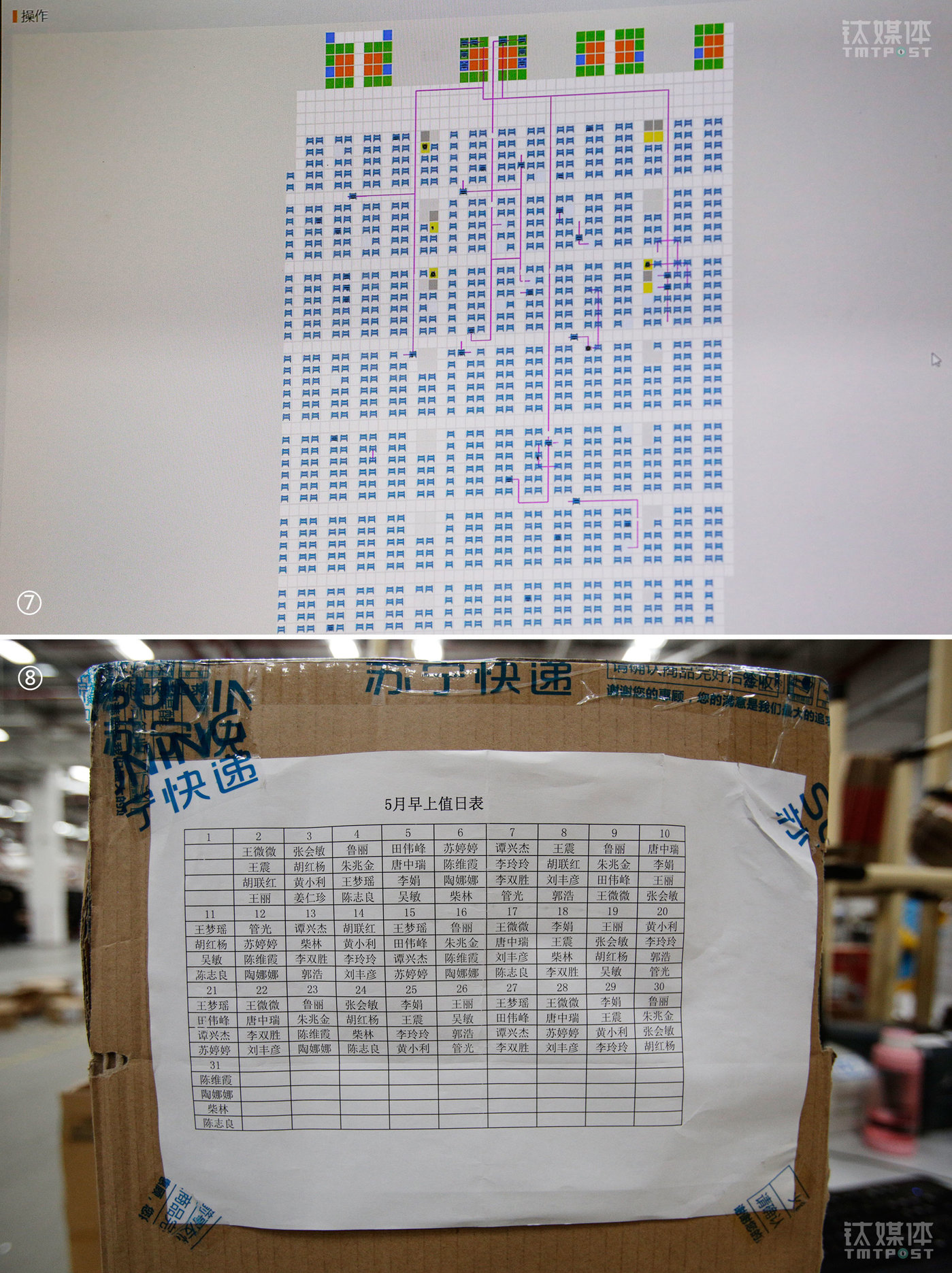 ⑦ ↑ The management system displays the real-time “roster” of the robots. The red and green sections represent the seven picking stations of the warehouse and the blue section represents the racks. The black dots represent robots, the yellow squares represent the charging stations and the red lines mark the robot tracks. To improve efficiency, the racks that are more frequented for picking automatically move to the positions closer to the workstations.

⑧ ↑ Warehouse staff members morning shift roster of May. Their work hours are from 8 am to 12 am next day, divided into the morning shift and the evening shift. There used to be more than 80 staff members but after the introduction of robots, there are now only more than 30 left. “Some have been transferred to other warehouses and some left through natural attrition. In the logistics industry, turnover is high” a manager explained to the TMTpost Focus 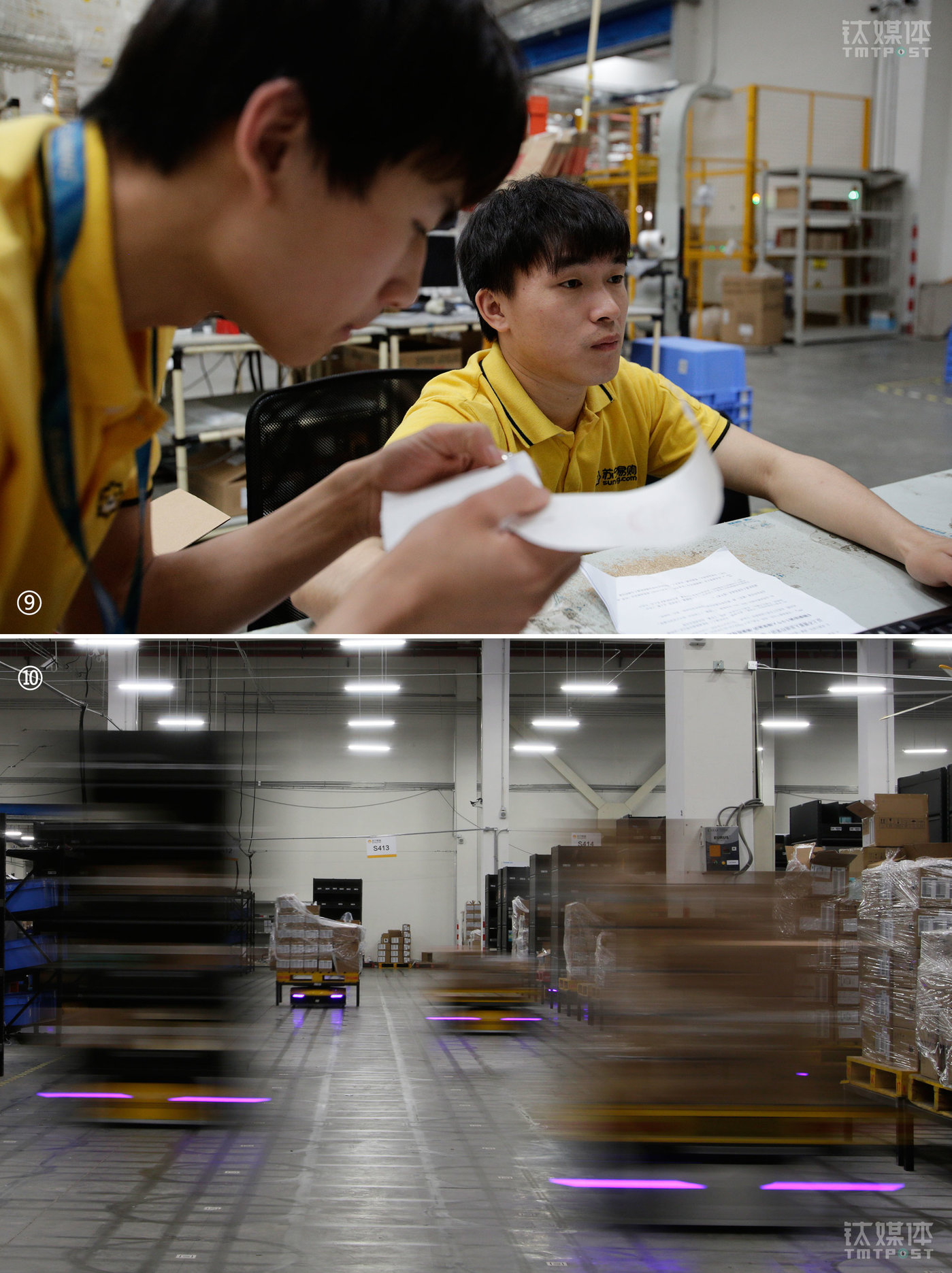 ⑨ ↑ Hu Hongyang is processing an abnormal order with a colleague. Hu said that before the robot colleagues arrived, in the process of picking, he spent 70% of his time walking. “The robot colleagues have freed me and now I can allocate some time to other important matters with my other colleagues.”

⑩ ↑ The precise teamwork among robots is also vitally important. In order to improve efficiency, the system will automatically distribute the robots evenly among various areas in the warehouse. When the robots meet, they can avoid each other through navigation and their obstacle avoidance systems after establishing the paths and the order of precedence. Cooperation among robots has guaranteed the smooth operation of the whole system. 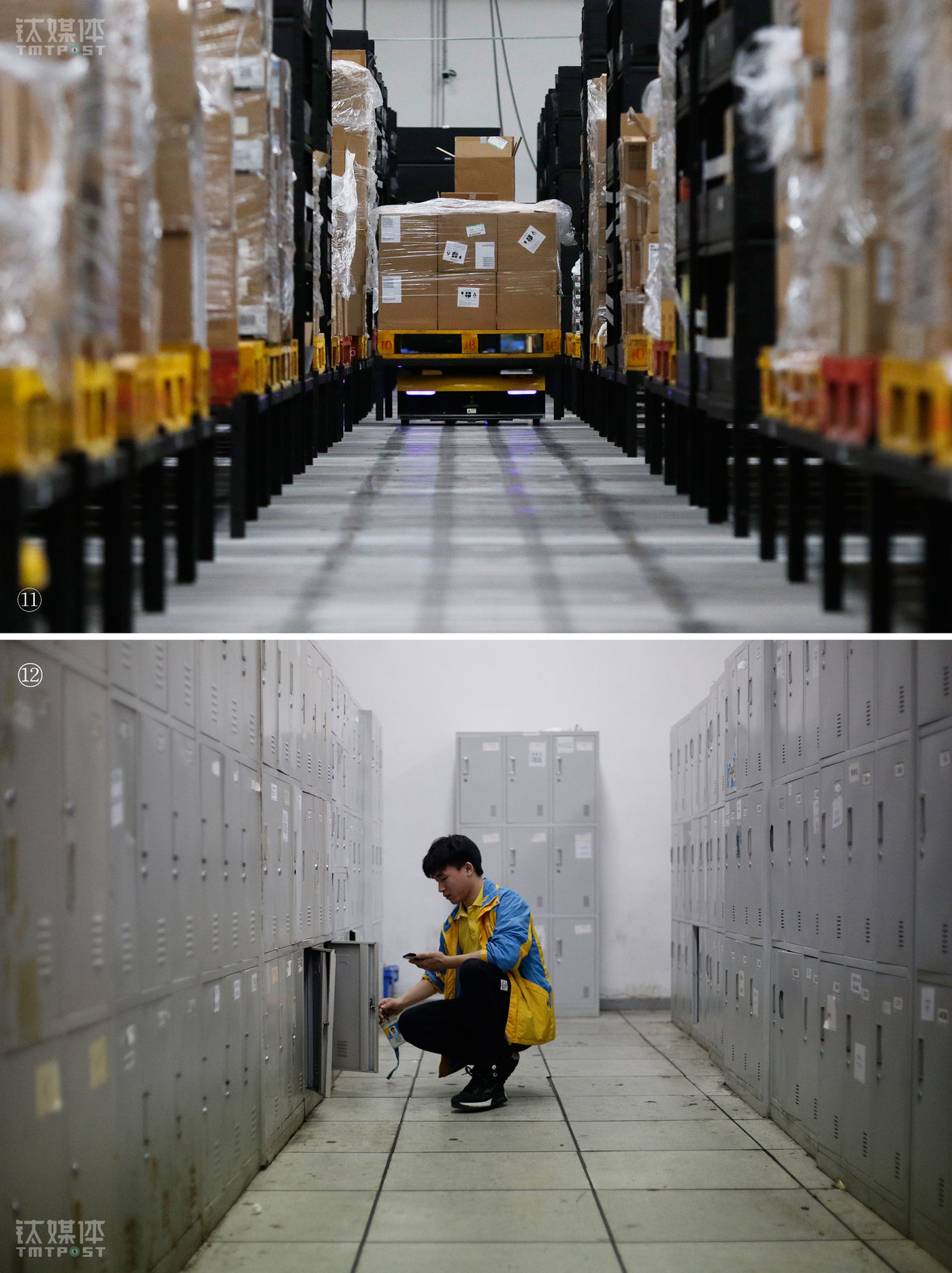 ⑪ ↑ A robot passes by the storage area while transferring the pallet. “When I just heard that robots were coming, I thought they would be humanoid robots who could walk. Can you image that at night when there's no light at the storage area, a group of humanoid robots are doing picking silently. That's a bit scary.” Seeing the petite stature of his new colleagues, Hu is now at ease. “They don't look threatening. Actually, they are quite cute.”

⑬ ↑ Lunch for Hu Hongyang, a bow of braised chicken rice for 20 Yuan. There is a canteen in the warehouse compound but the food “tastes just so so.” Hu Hongyang and his friends prefer to eat in restaurants outside.

⑭ ↑ The robots are being re-charged at the storage area. When not busy, according to the system configuration, as soon as the power is lower than 70%, the robots will go to the self-charging stations to recharge. “In 10 minutes, 20% to 30% of the power can be recharged and from zero power to being fully charged takes only a bit over one hour. Fully charged robots can work for 10 hours consecutively” an operational maintenance staff member explained to the TMTpost Focus. Stable power supply to these robots is vital to handle any sudden increase of order. 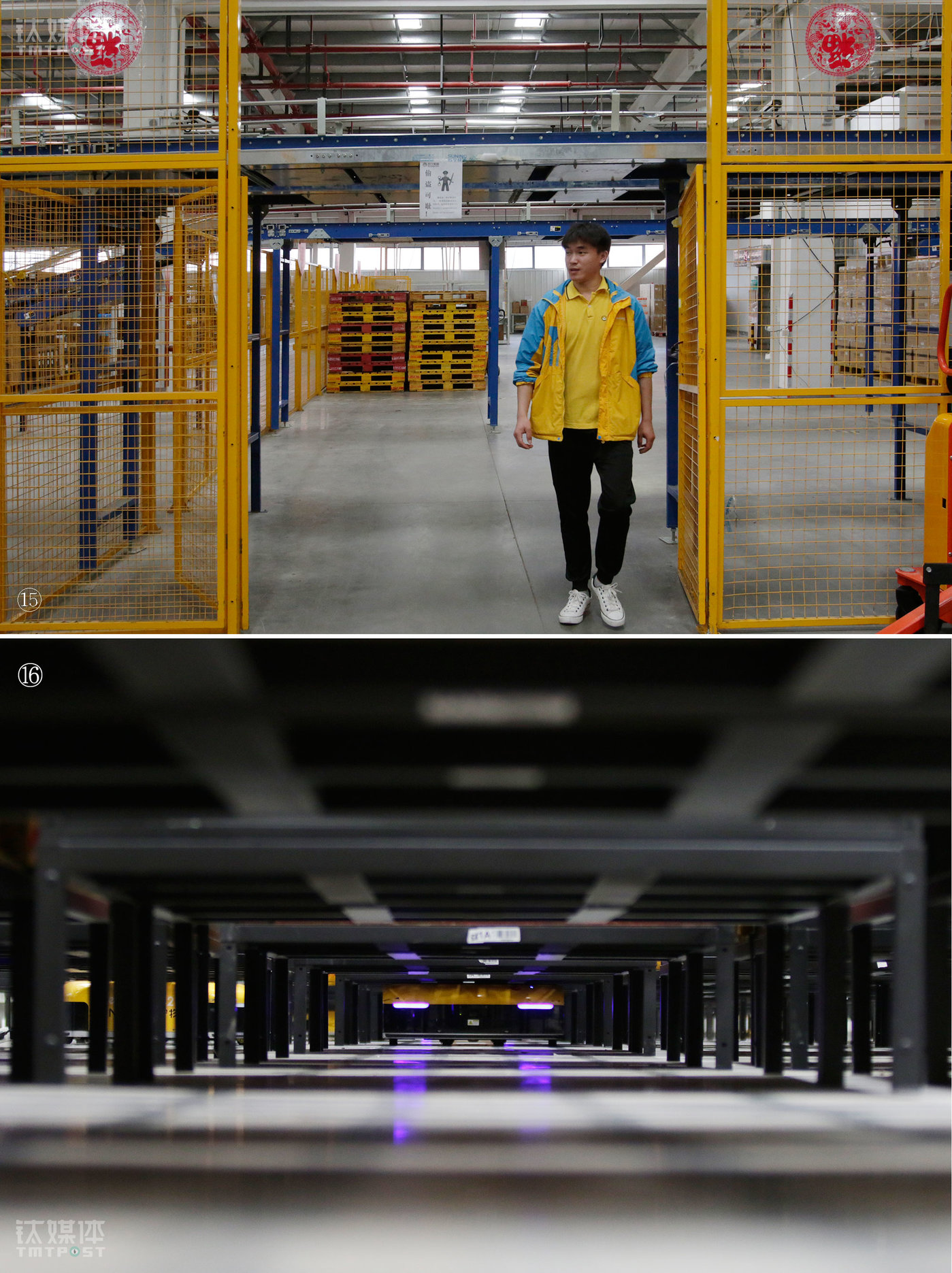 ⑮ ↑ After the afternoon break, Hu Hongyang returns to the warehouse. This is his first job. Before this, he had no experience working with robots. “I only got used to it after a full month of study” said Hu. During busy periods such as holidays, the advantages of the robotic system become obvious. “A robot who works for an hour non-stop will be able to pick 500 pieces of goods. For a person, 100 pieces of goods are quite a lot if he runs for an hour non-stop.”

⑯ ↑ A robot is “resting” under a rack. In the eyes of Hu Hongyang, these small colleagues are very cute, like kids. They run around carrying products and are hard working, reliable and indefatigable. 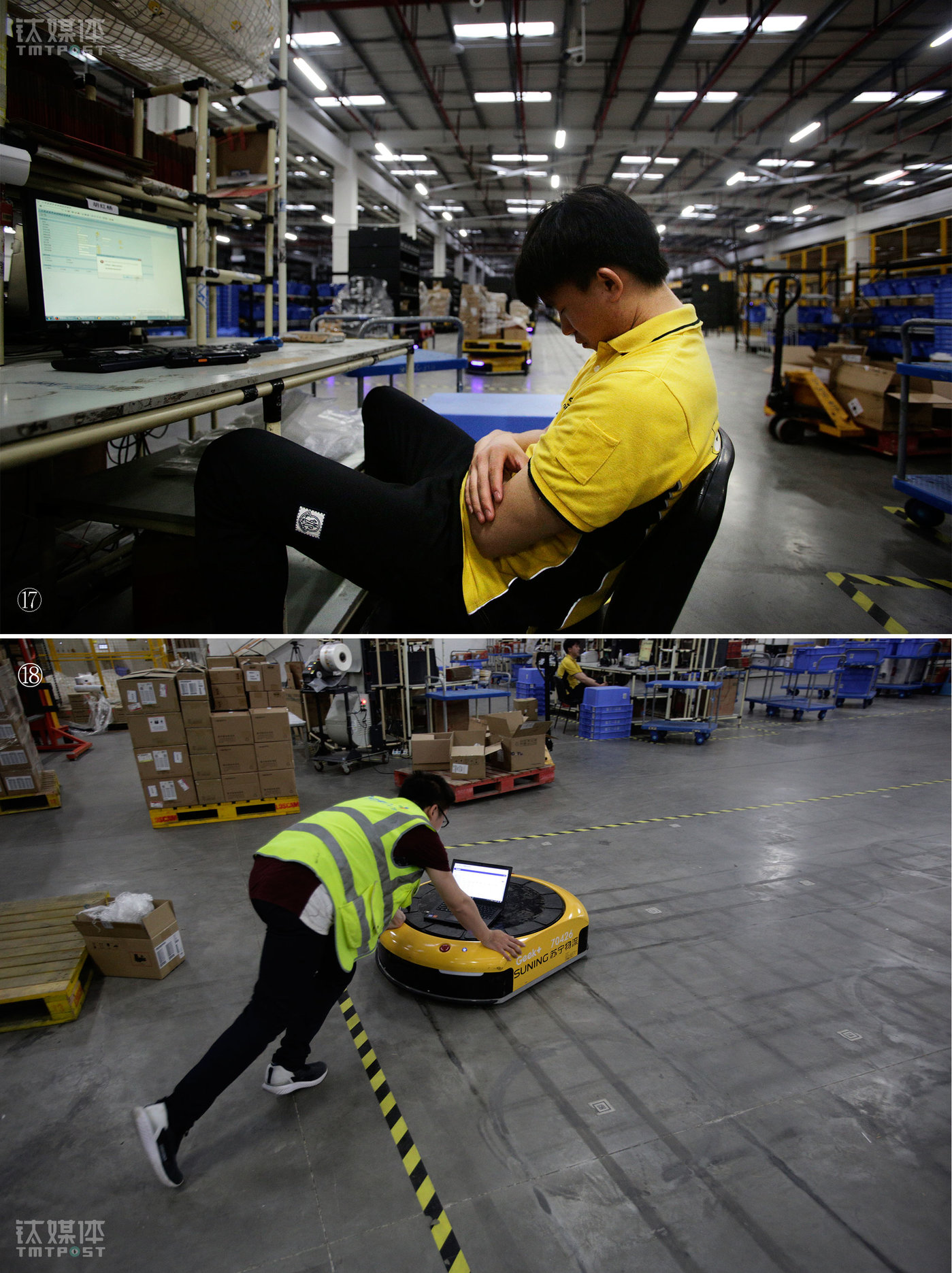 ⑰ ↑ At night, it is already past the closing time. Hu Hongyang is having a catnap while waiting for his colleagues.

⑱ ↑ An operational maintenance staff member leaves the picking area pushing a robot and is going to perform examination on the robot. “Errors of robots are all human errors.” In Hu Hongyang's experience, robots do not make mistakes. Their mistakes are all man-made errors. 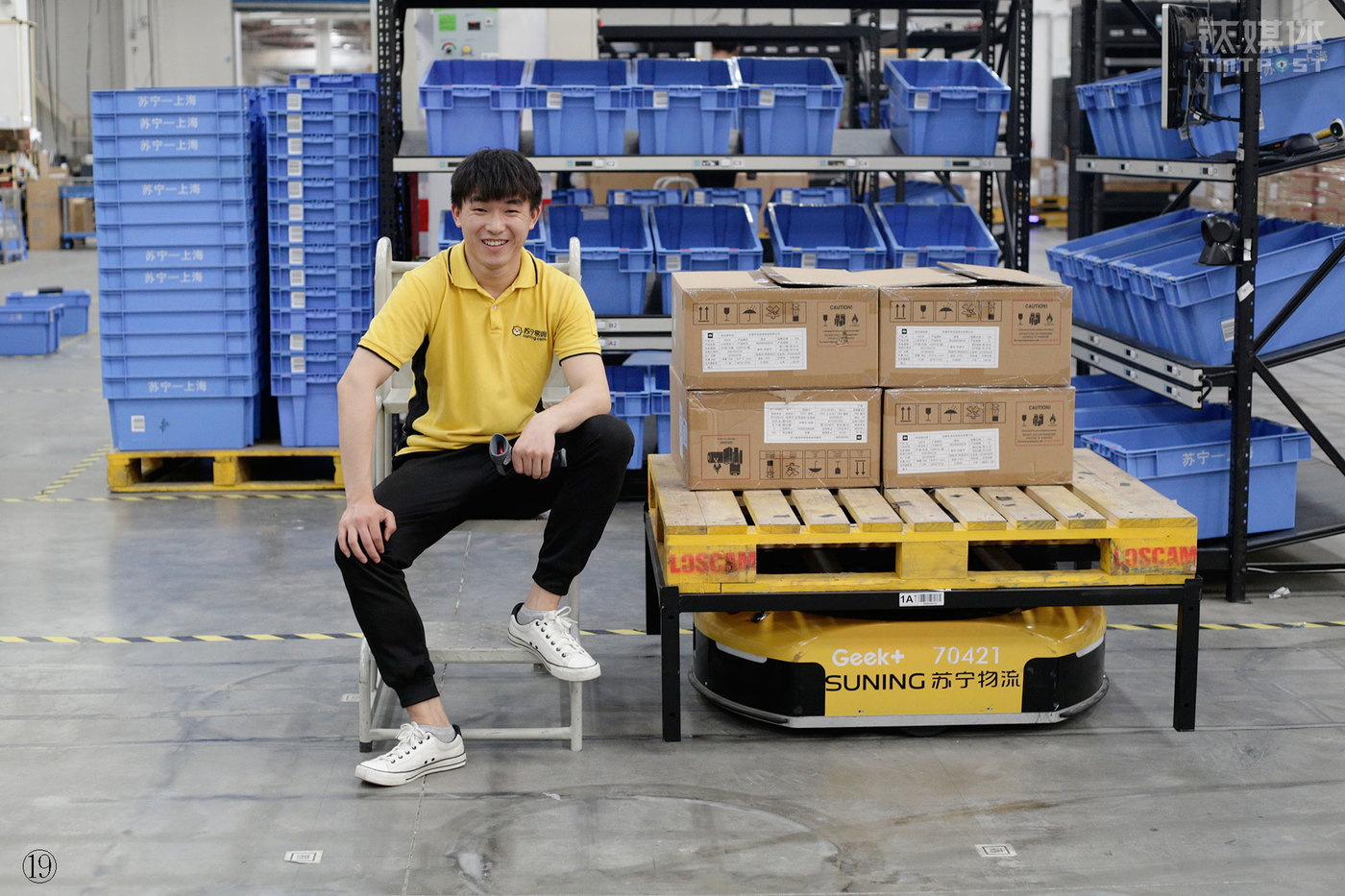 ⑲ ↑ When the robots just arrived at the warehouse, Hu Hongyang first pondered whether he would become unemployed because of them. Later, he got over his worries and now he believes that if one day, no human workers are needed in the warehouse and the robots completely replace the humans, it may not necessarily be a bad thing. “Our hands will be freed, and we will have time to do more meaningful things.”

TMTpost Image Column Focus
Endeavors to accurately record individuals riding the waves of Internet startups.
Images are accurate, but they do not reflect truth in it’s entirety.
Images are free. At the same time, images are traps.
In this “Focus” era, together with you, we will make more discoveries.