Cats and dogs prevalent in China

摘要： Sometimes you may not be able to tell whether human need pets or pets need human.

Keeping cats and dogs has become a new lifestyle of urbanites. In some homes, cats and dogs are treated as family members, comforting and accompanying their owners. Sometimes you may not be able to tell whether human need pets or pets need human. TMTpost interviewed three cat and dog keepers.

Designer Mr. Xu: saving a life with 50,000 RMB is worthwhile 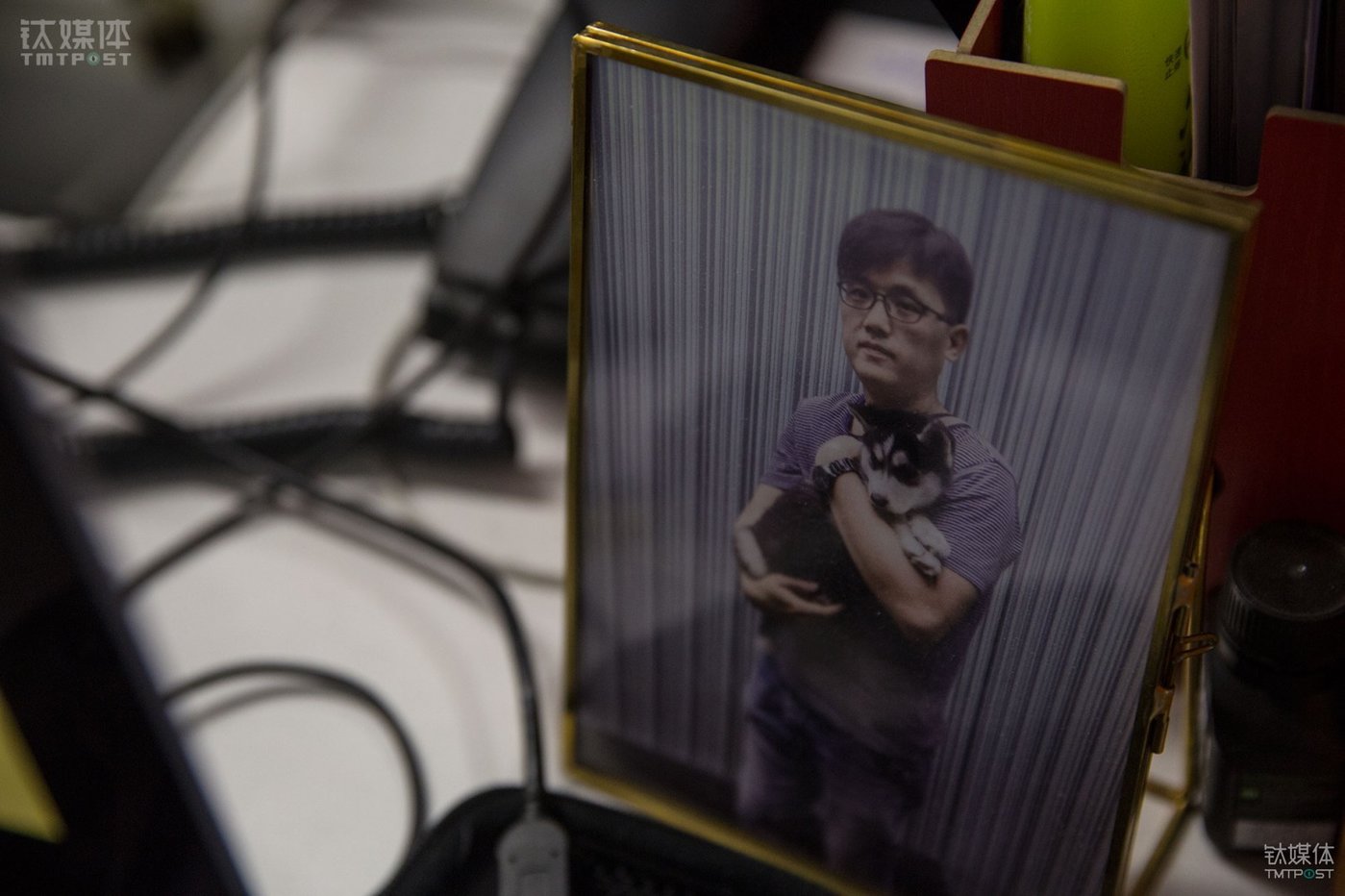 There is a photo of Mr. Xu and his Husky dog Summer on the desk of his office in Guanghualu SOHO, Beijing. The photo was taken in the summer of 2017, when Mr. Xu adopted this stray dog from his colleague. He named the dog Summer. 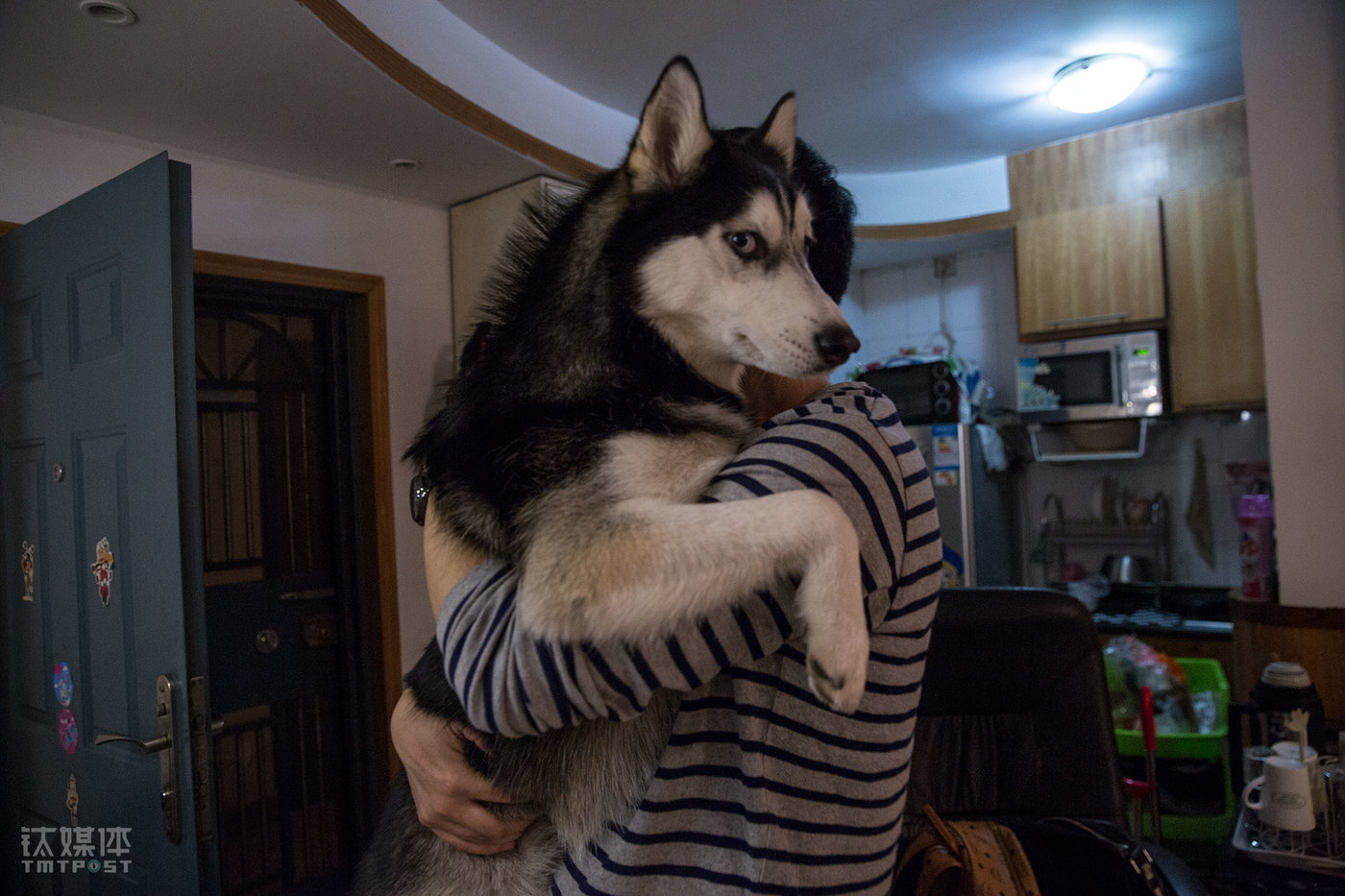 Beijing, April 2, 2018, Mr. Xu came home from work and held his dog Summer, who was adopted by Mr. Xu when she was about three months old. Summer is over one year old now. Not long after being adopted, Summer was diagnosed as congenital ureteral ectopia, which is almost incurable. Mr. Xu and his wife didn't give it up and saved the dog's life by surgery. They spent over 50,000 RMB on Summer's full treatment in the hospital. 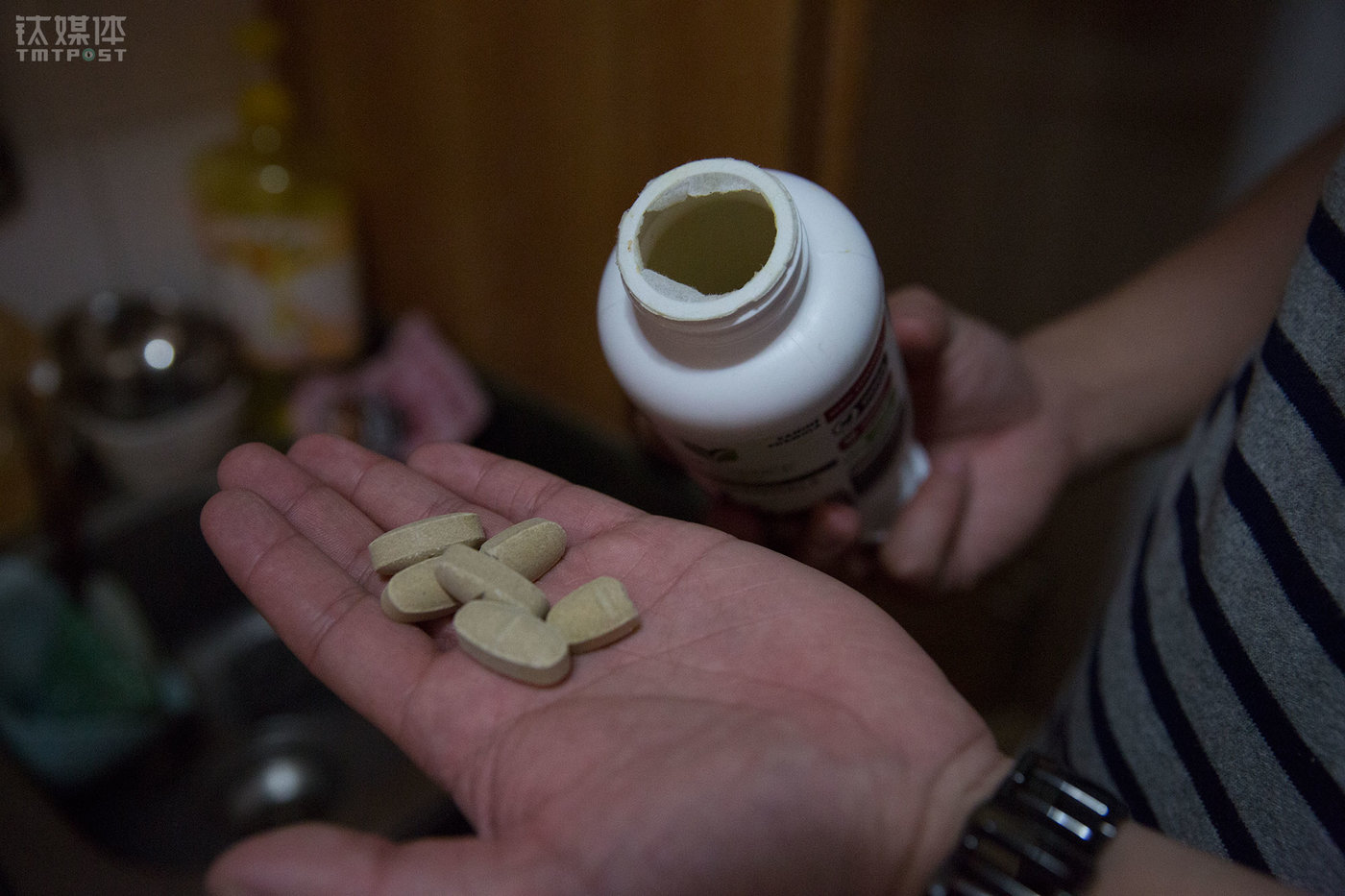 Summer is still recovering. She needs to take medication to maintain a relatively healthy kidney condition. The imported medication costs Mr. Xu about 600 RMB a bottle, which has 60 pills. 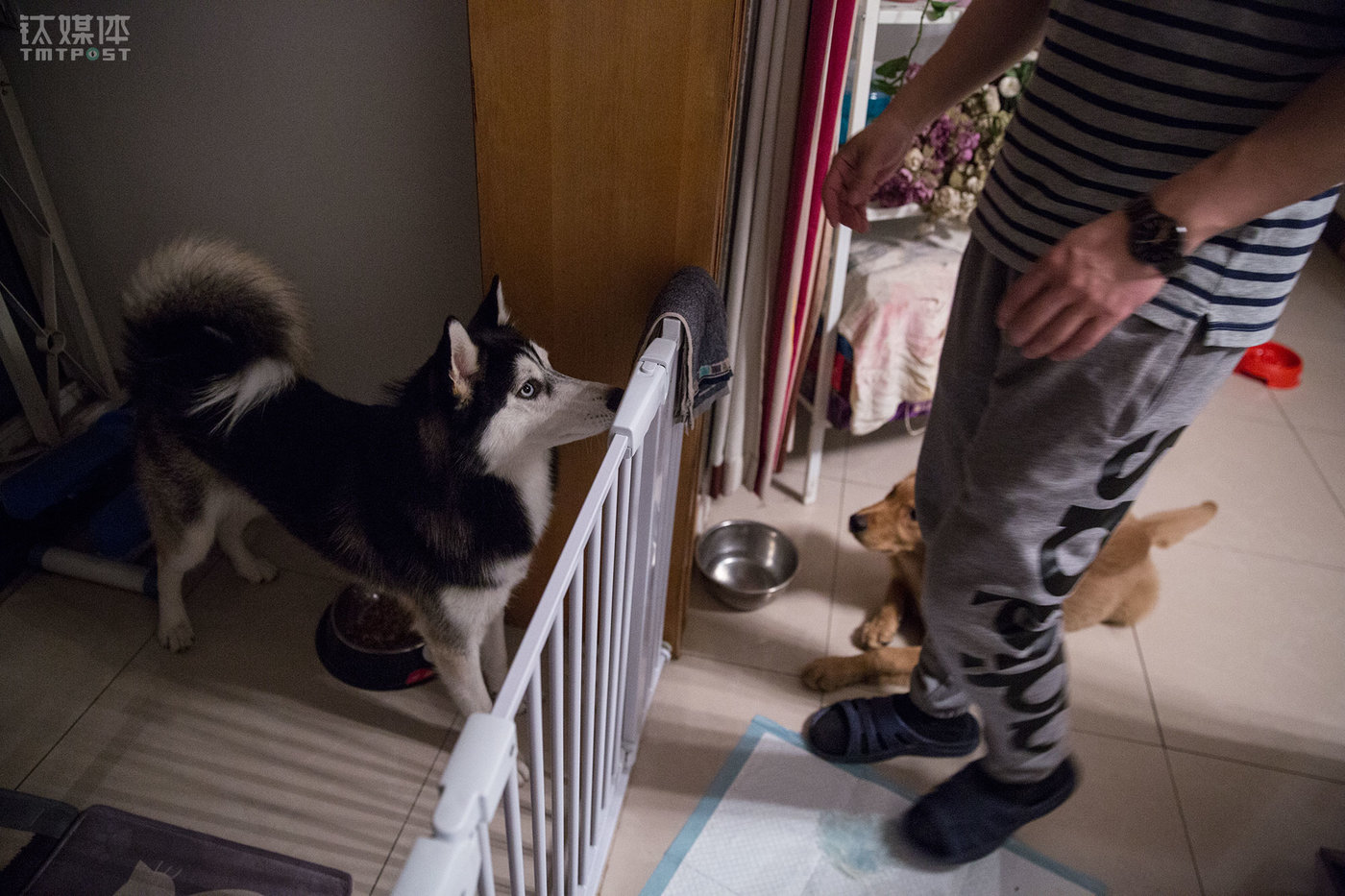 "Destiny brought Summer to our life, and we've never wanted to abandon her," Mr. Xu said, "of course we care about the money we've spent, with which we could travel in Europe. But this life we've saved cannot be evaluated by money." After the serious illness, Summer is not as active as other Husky dogs and "behaves herself." 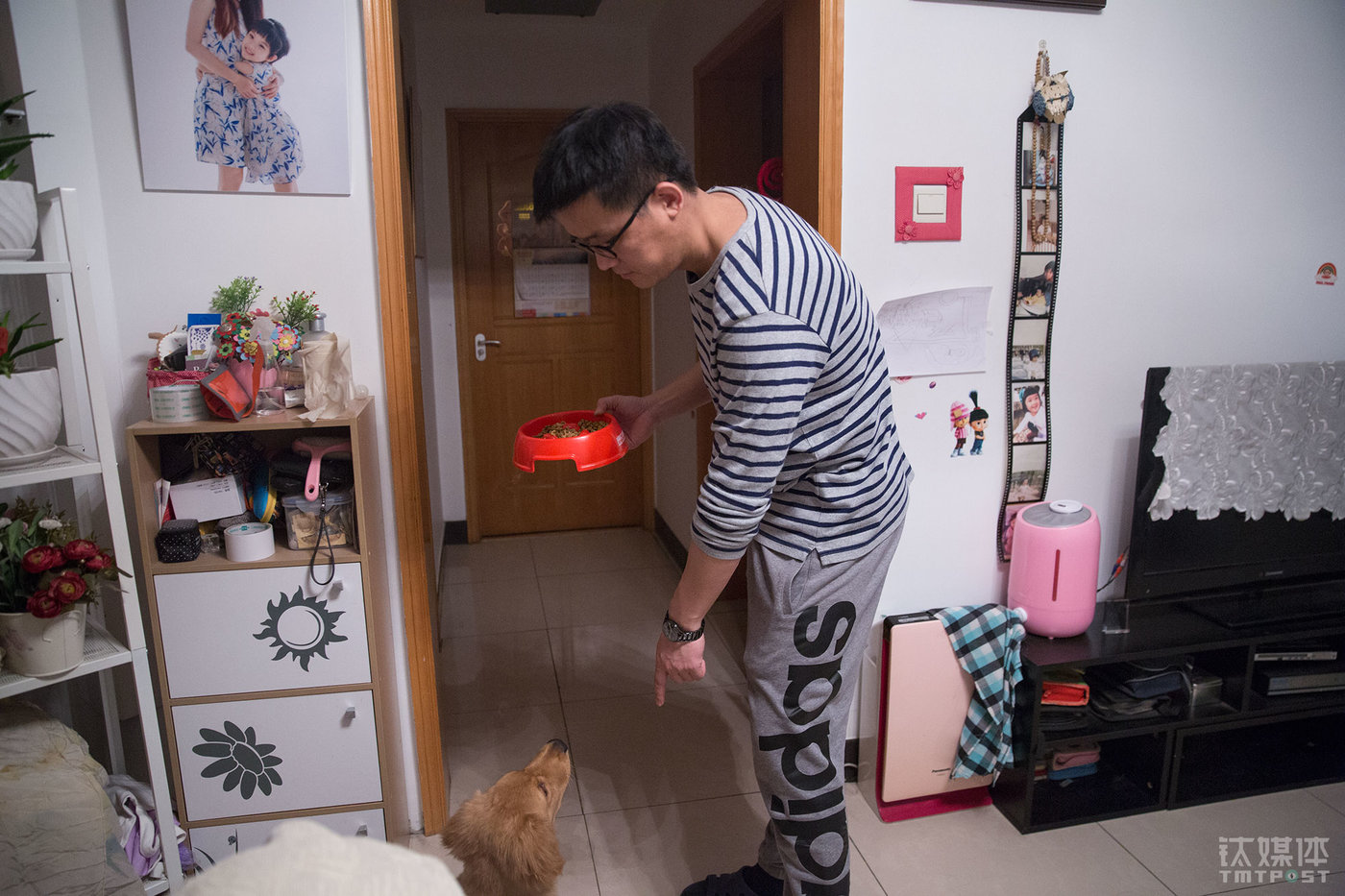 In less than one year, Mr. Xu's nine-year-old daughter has got attached to Summer. Since there is no cure for Summer's disease, it's uncertain how long the dog can survive. Being worried Summer's death someday may grieve his daughter, Mr. Xu adopted another puppy golden retriever and named him Duobao, which means "one more baby of the family." (Picture: Mr. Xu is feeding Duobao) 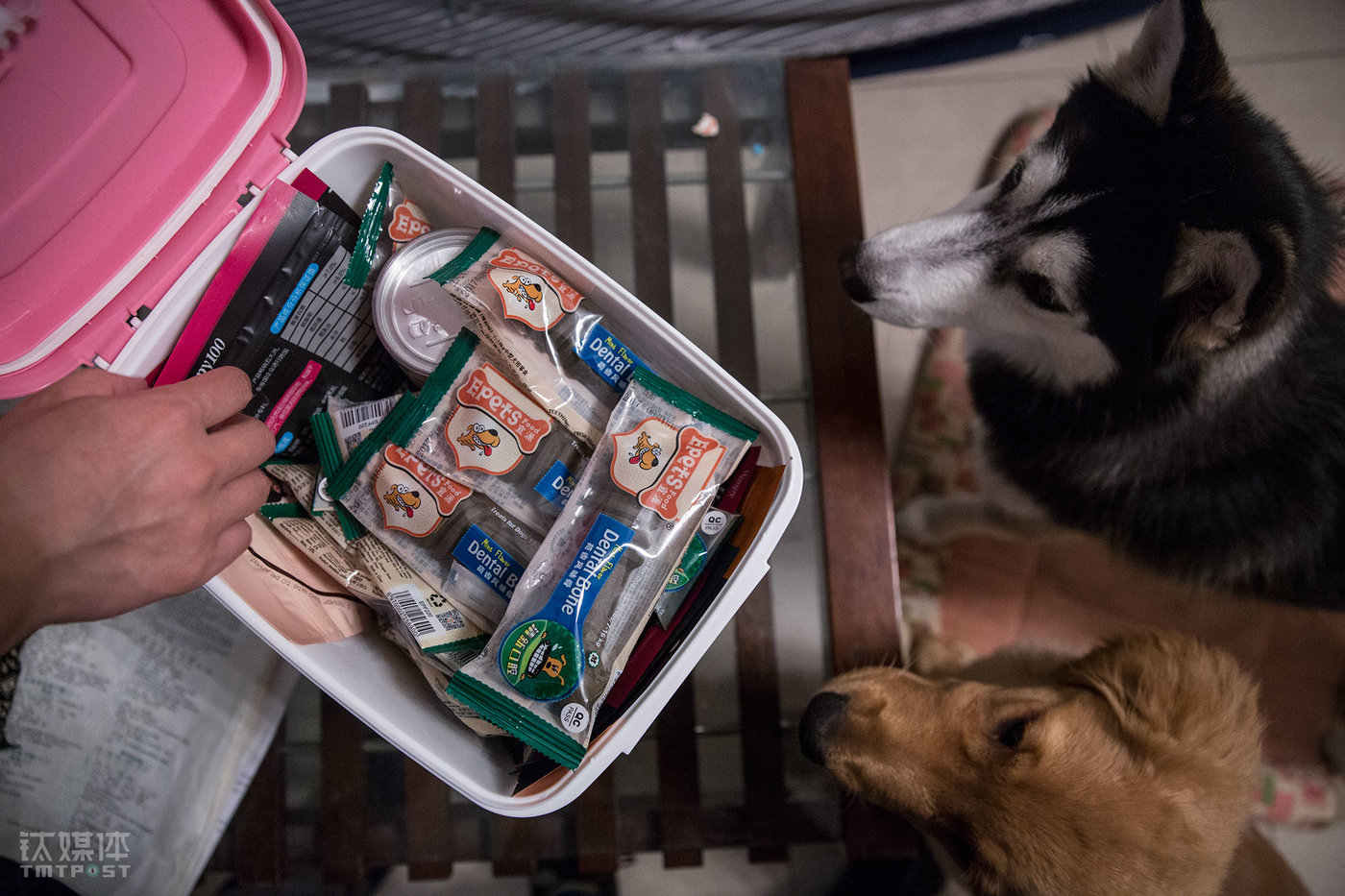 Summer and Duobao are waiting for treat. Mr. Xu spends about 2,000 RMB on the two dogs every month. 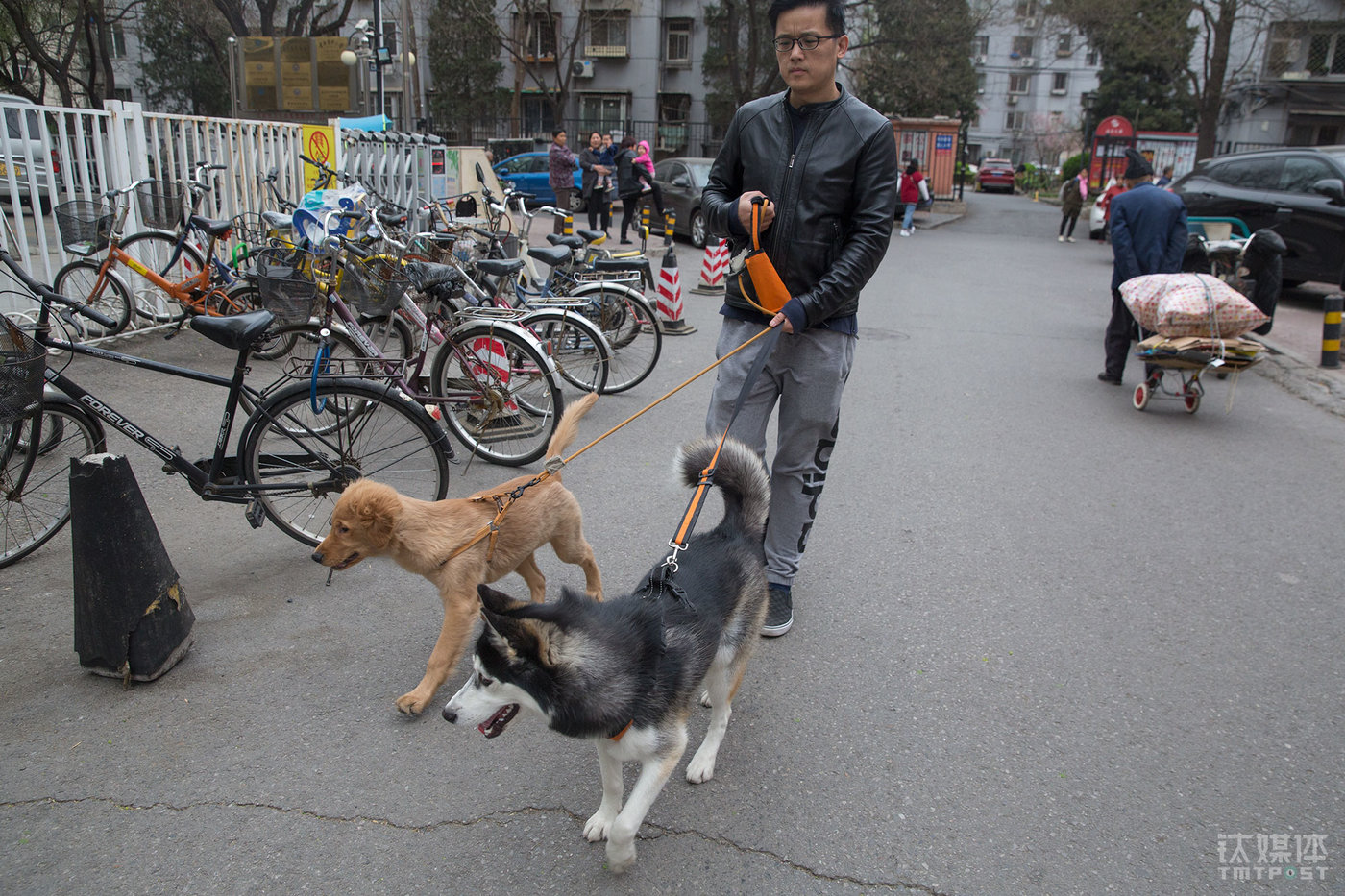 Mr. Xu walks his dogs every morning or evening if the weather is not bad. There is a dog playground in his community. Nearby construction work has been going on since April. Mr. Xu said if the playground is demolished, the dogs could no longer play in that place without leash. 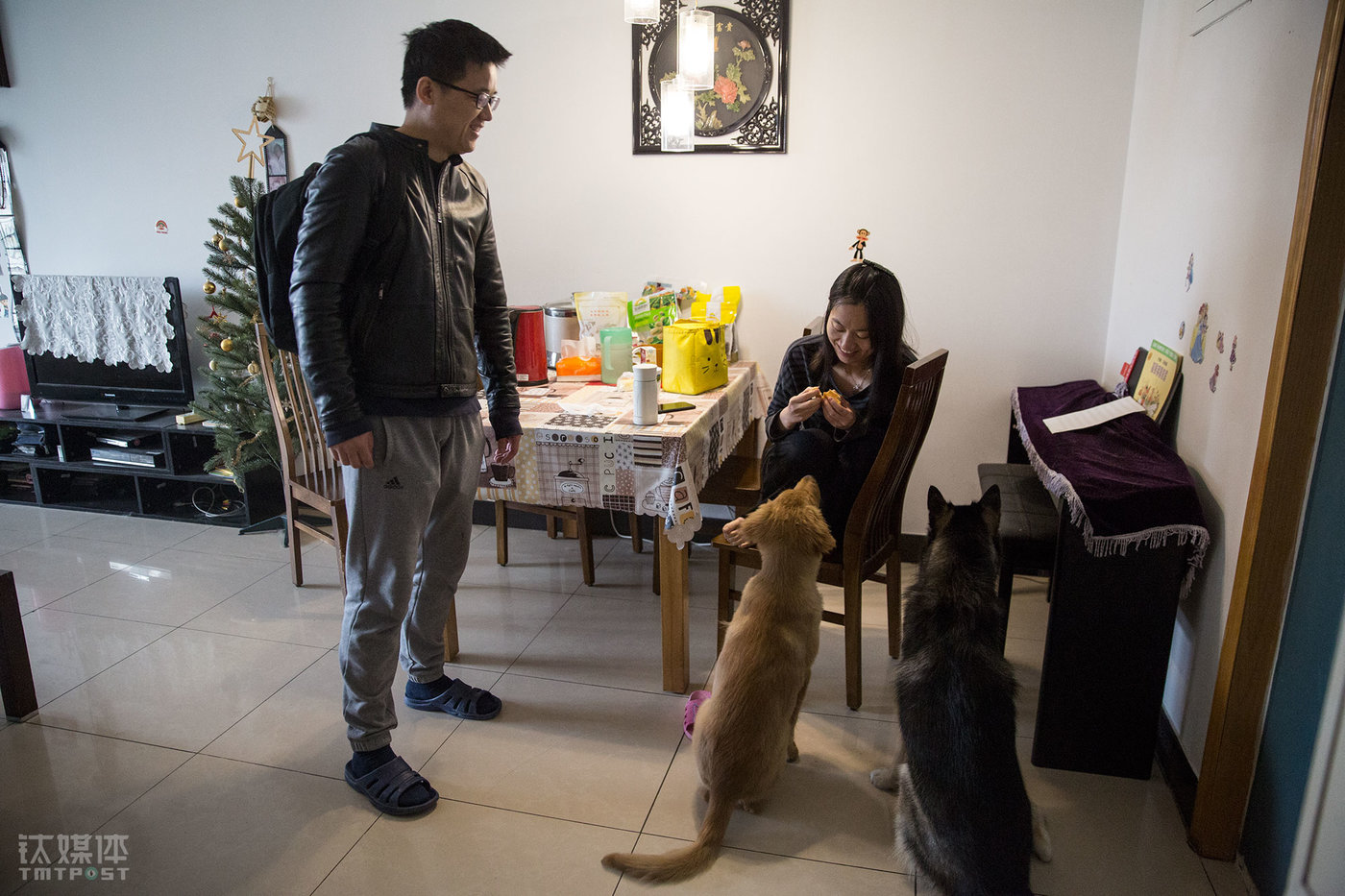 In the morning of April 3, Mr. Xu is leaving for work after walking dogs. His wife is having breakfast, while Summer and Duobao are sitting on the ground waiting for food. "My daughter didn't have a company until Summer and Duobao came," Mr. Xu said. The couple was thinking about having their second child before they adopted the dogs, now the plan has been delayed.

Julia, owner of three cats: I didn't sleep the whole night when my cat was missing 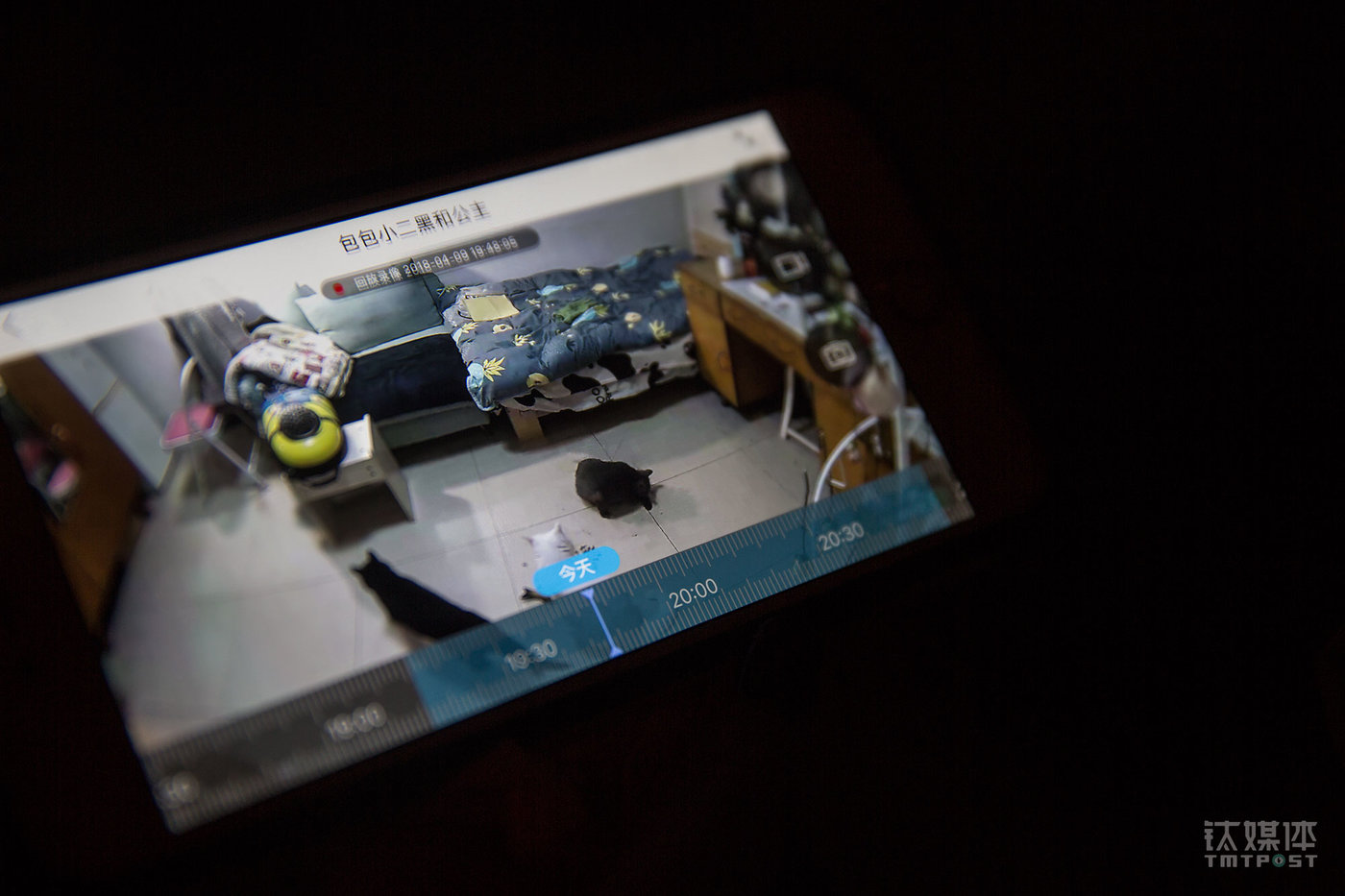 Wanjing, Beijing. Julia, head of TMTpost e-commerce platform, is watching her three cats at home via a 360-degree camera. 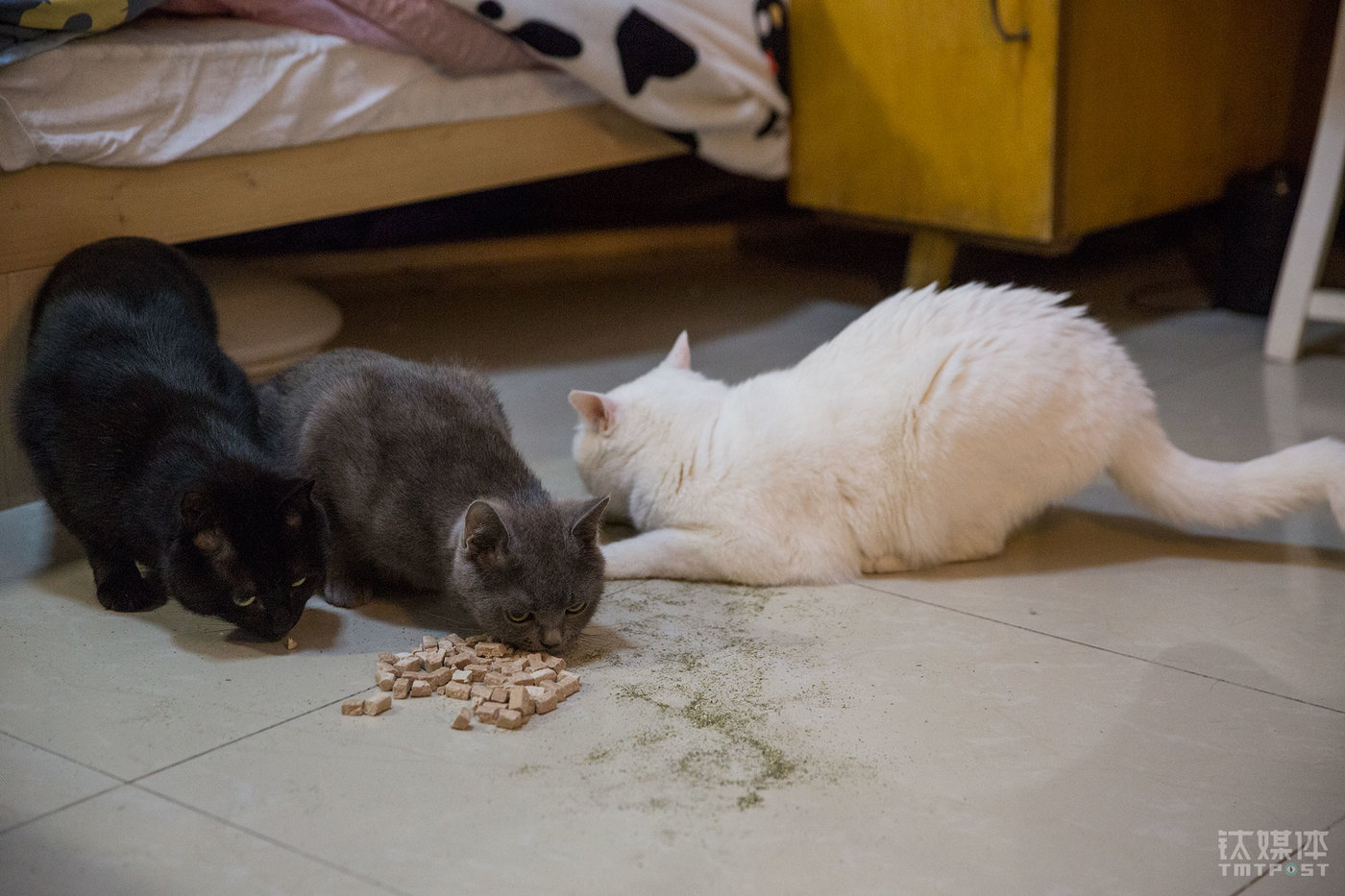 The three cats are Baobao (right), Xiaohei (right) and Princess (middle). Julia had her first cat Baobao five years ago. Frequent business trips make Julia too busy to be with Baobao, so she adopted Xiaohei one year later. As Baobao and Xiaohei grow up, Julila got Princess.

(Xiaohei and Princess hide under the bed when the photographer came. Julia put some catnip and treat on the ground to attract them, a picture of the three cats was finally captured.) 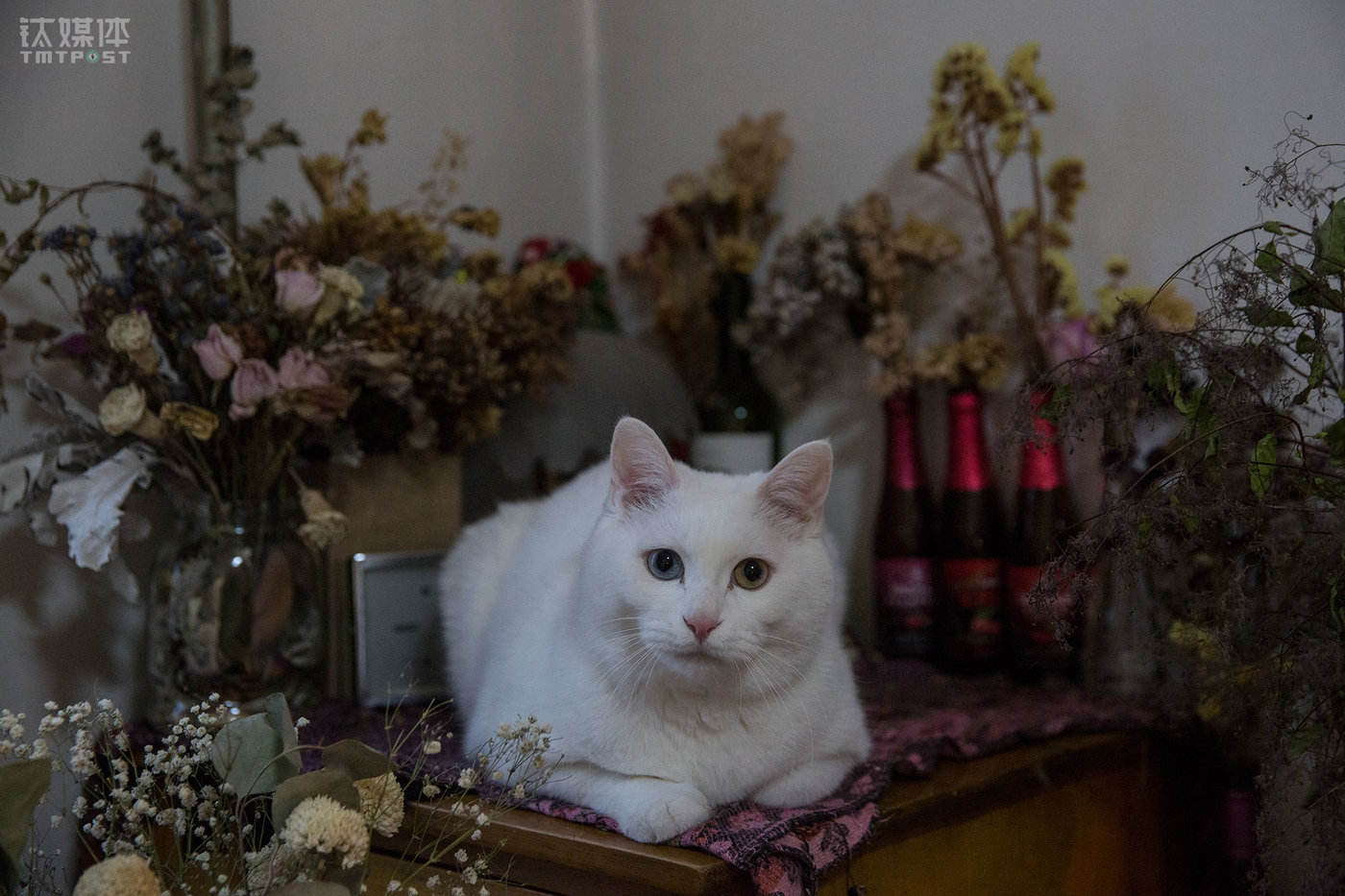 Baobao is a five-year-old American Shorthair. Before being spayed, Baobao went missing in the building. "Back then I lived in a high-rise of over 20 floors. I posted notices about Baobao on every floor of the building. I was so worried and didn't sleep for the whole night. A neighbor finally came and said that they found my cat from their AC outdoor unit and kept him for a whole night." 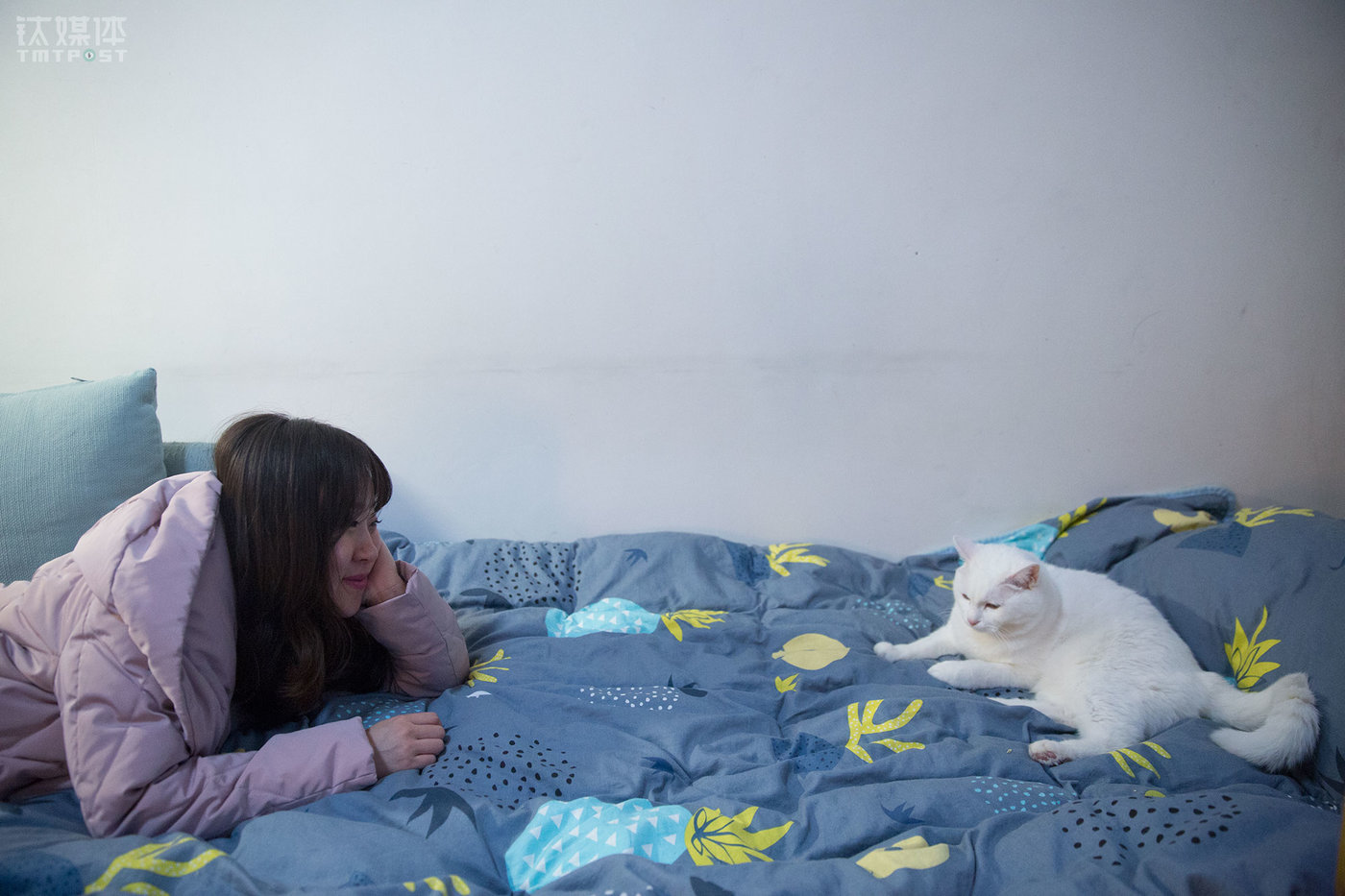 The cats sleep with Julia in her bed everyday. She treats them as families. "They are good companies," she said. 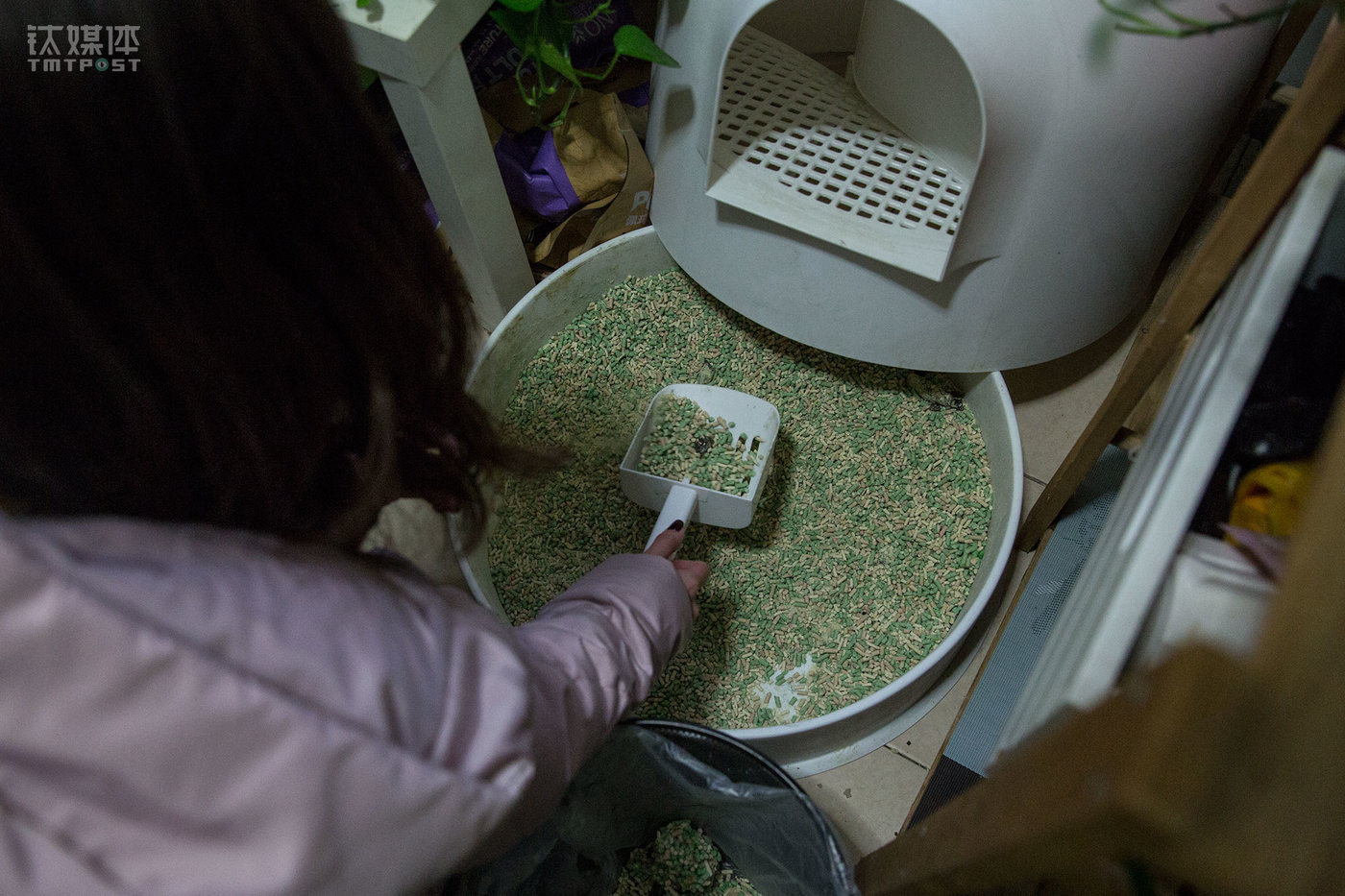 As a "poop picker," Julia spends nearly 1,000 RMB on her three cats every month. The money is cost for cat food, cat litter, toys and accessories.

Mother-to-be Jieni: it'll be my fourth child when it's born Beijing, April 11. Mother-to-be Dong Jieni and puppy Apple are at home. Her baby will become the fourth child of the family after birth in September, because Jieni already has one "daughter" and two "sons" – puppy Apple and two cats. 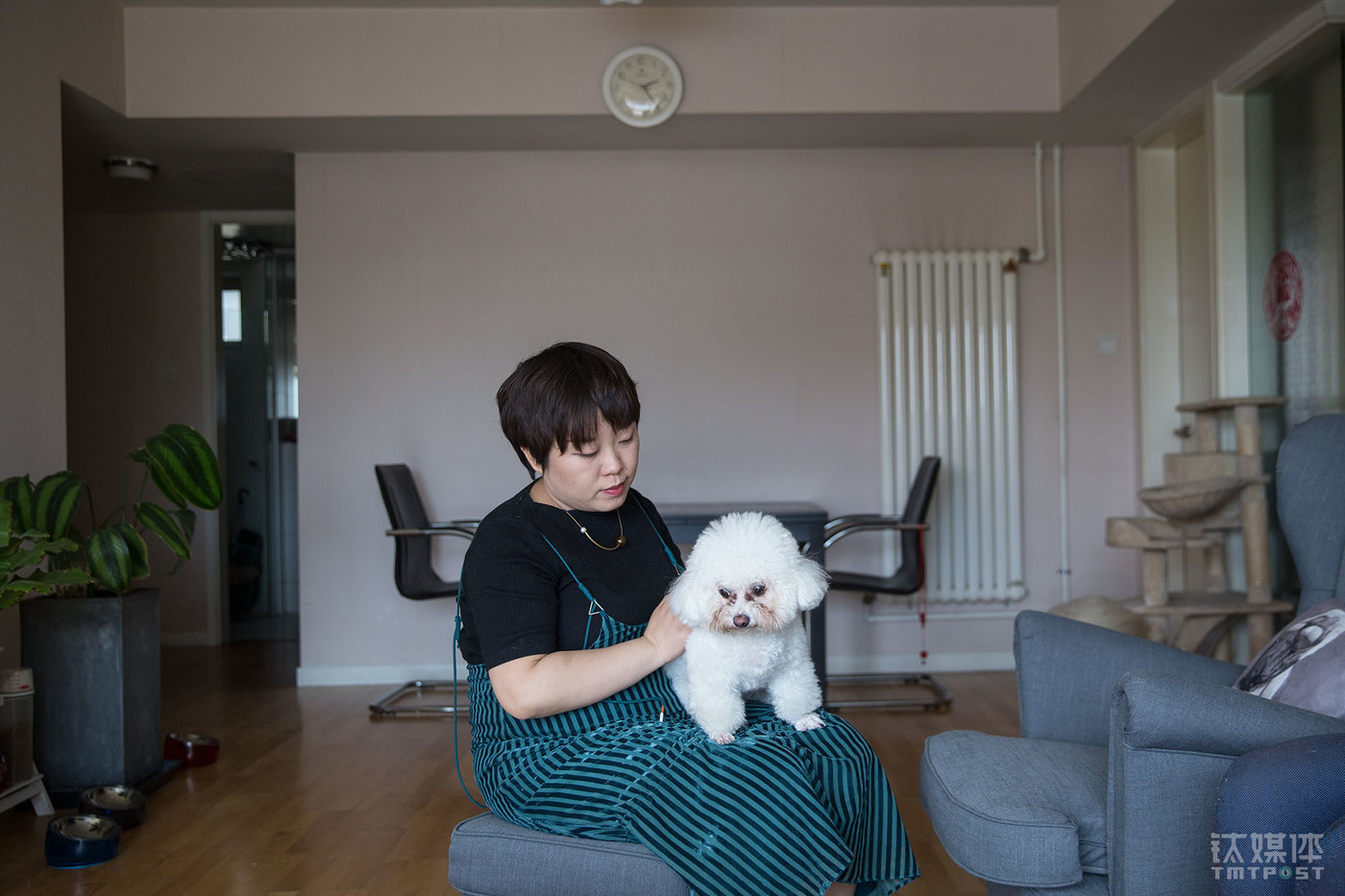 Jieni had Apple, a Bichon Frisé, before she got pregnant. Her parents wanted to give Apple away because they worried cats and dogs may affect pregnant women and the baby. Jieni insisted to keep Apple, and finally succeeded to keep the dog and cats after doing some checkups and taking some measures. Before pregnancy, Jieni got asthma in a cold. The doctor suggested her keep away from cats and dogs, which may worsen her condition. Instead of giving them away, Jieni did more exercise as instructed by the doctor and then her asthma symptoms disappeared. 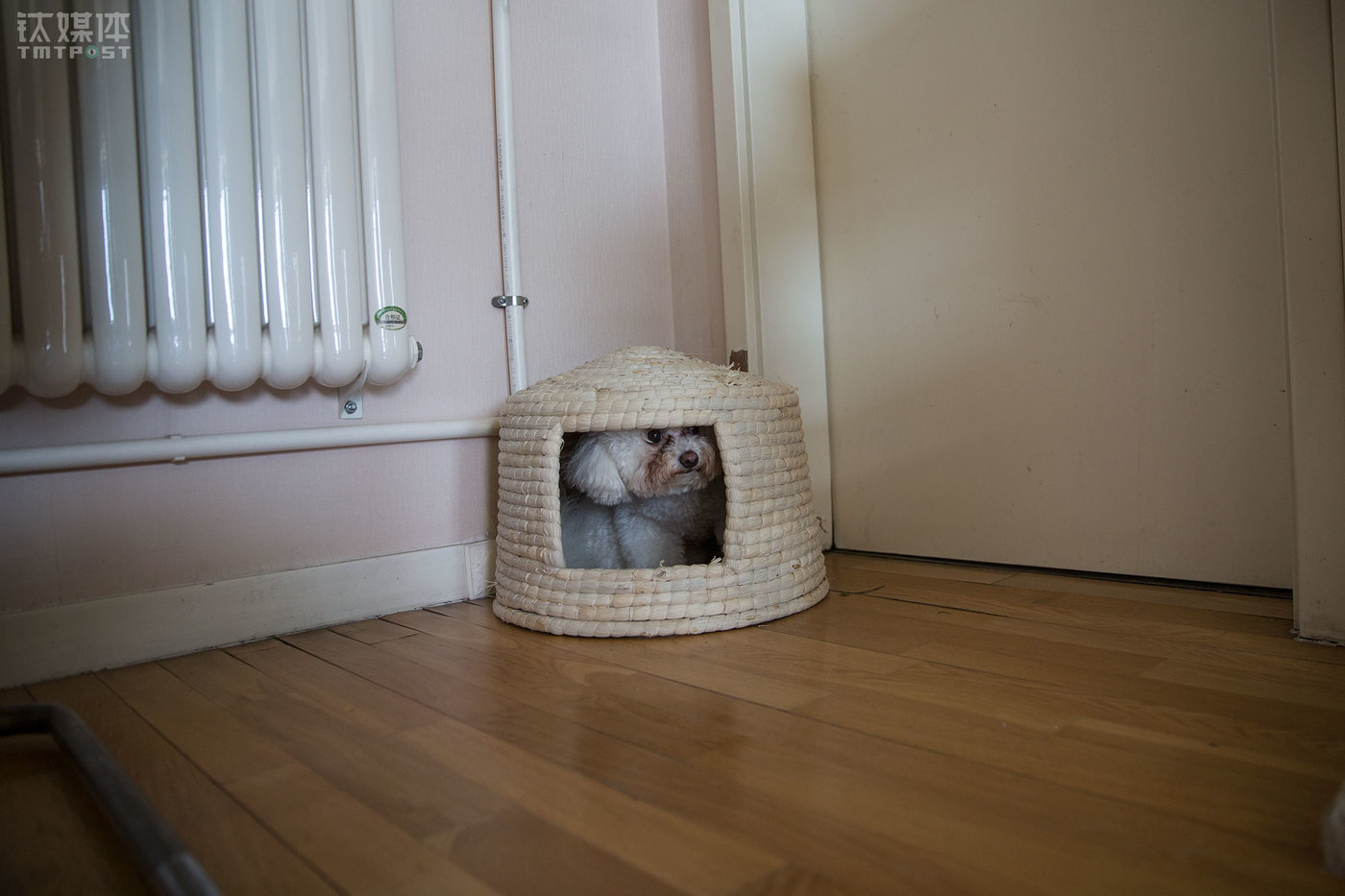 I had decided to live with my cats and dog for a lifetime before I kept them. And I knew I could accept any challenges and hardships." Jieni was aware that her asthma was not caused by the pets, so they are innocent. "You decide what to do, it has nothing to do with the cats and dogs." Jieni feels the happiness and fulfillment she enjoys from the dog and cats is way more than the challenges and hardships she has encountered. 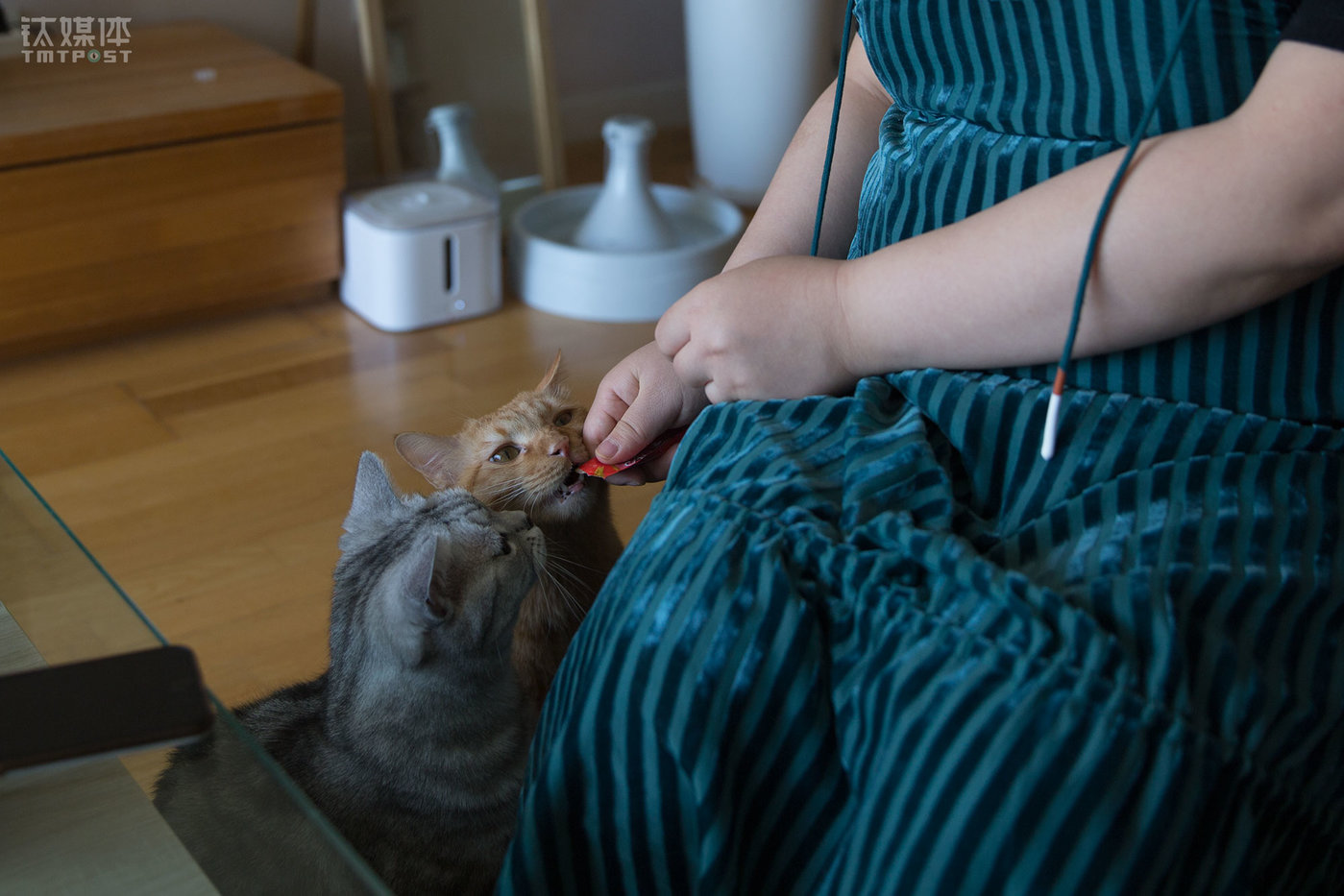 Besides puppy Apple, Jieni also has an American Shorthair and an orange cat. The orange cat was a skinny stray kitten when Jijie met her on way home after walking dog. The dirty kitten came out from shrubs and rubbed against Jieni while meowing softly. Jieni couldn't help saving the poor thing and took it home. 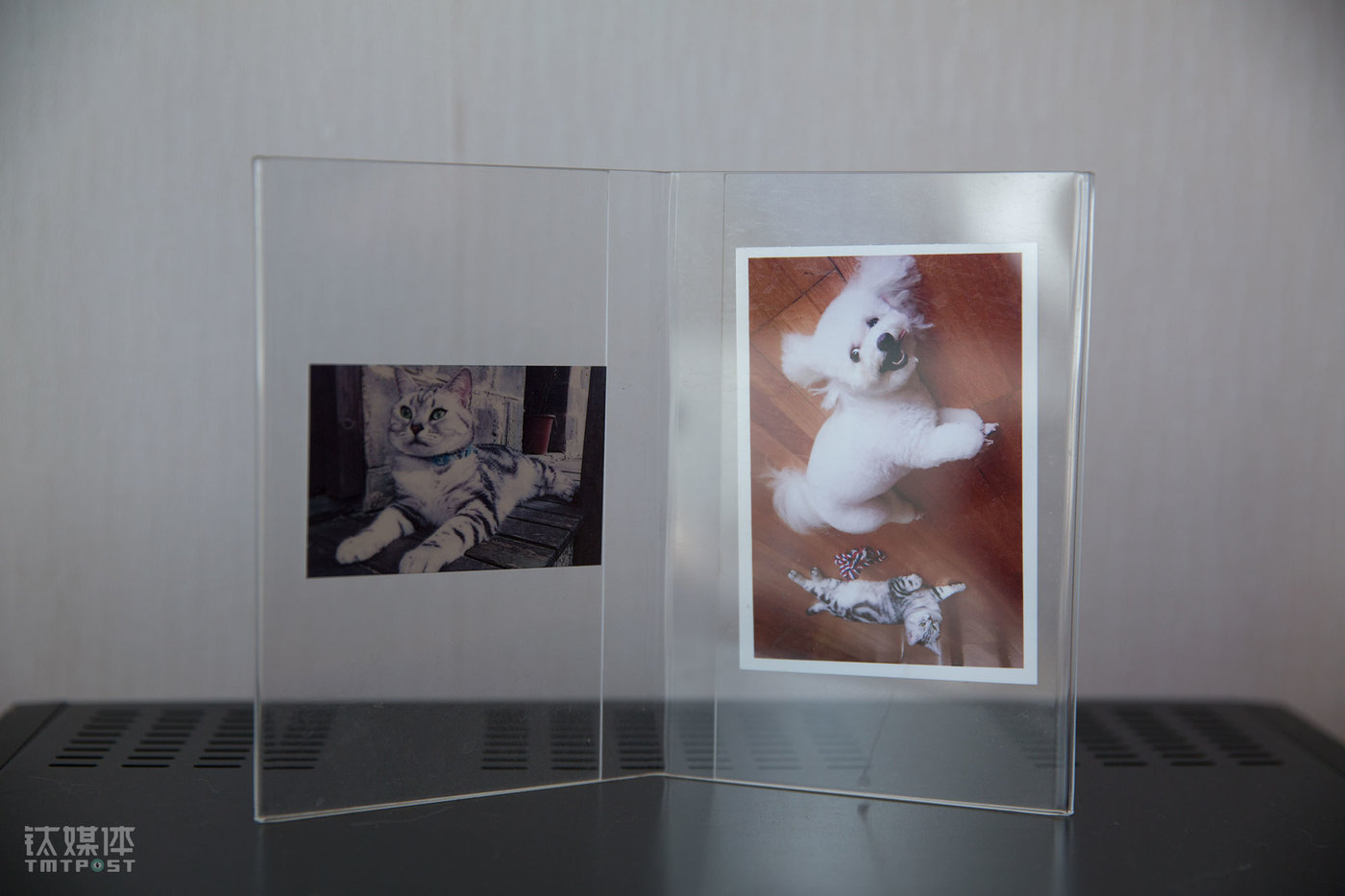 Cat and dog pictures Jieni took at the hotel when travelling. Jieni and her husband travel by car every year so that the cats and dogs can come along. Cats and dogs give her different feelings. "Dogs always need owners around, which greatly satisfies a person's feeling of being needed. While cat owners need cats to be around, and when cats make response, the owner would be happy." Jieni believes that cat owners seem to live in the moment and want relatively free and casual relationship. However, dogs make their owners feel they are needed so much, and dogs are more like kids. There are two water dispensers for the cats in Jieni's living room. The orange cat has been used to drink dripping water since she was a stray cat. The American Shorthair likes gushing water as a domestic cat. "Pet owners spent more money in the first two years because most of them do not know ethology. Having graduated with a MBA degree, Jieni had a part-time job in a pet Internet company. Seeing the pet industry's potentials, Jieni has built a pet products platform called HowUpet to teach pet owners how to choose proper products for their pets. 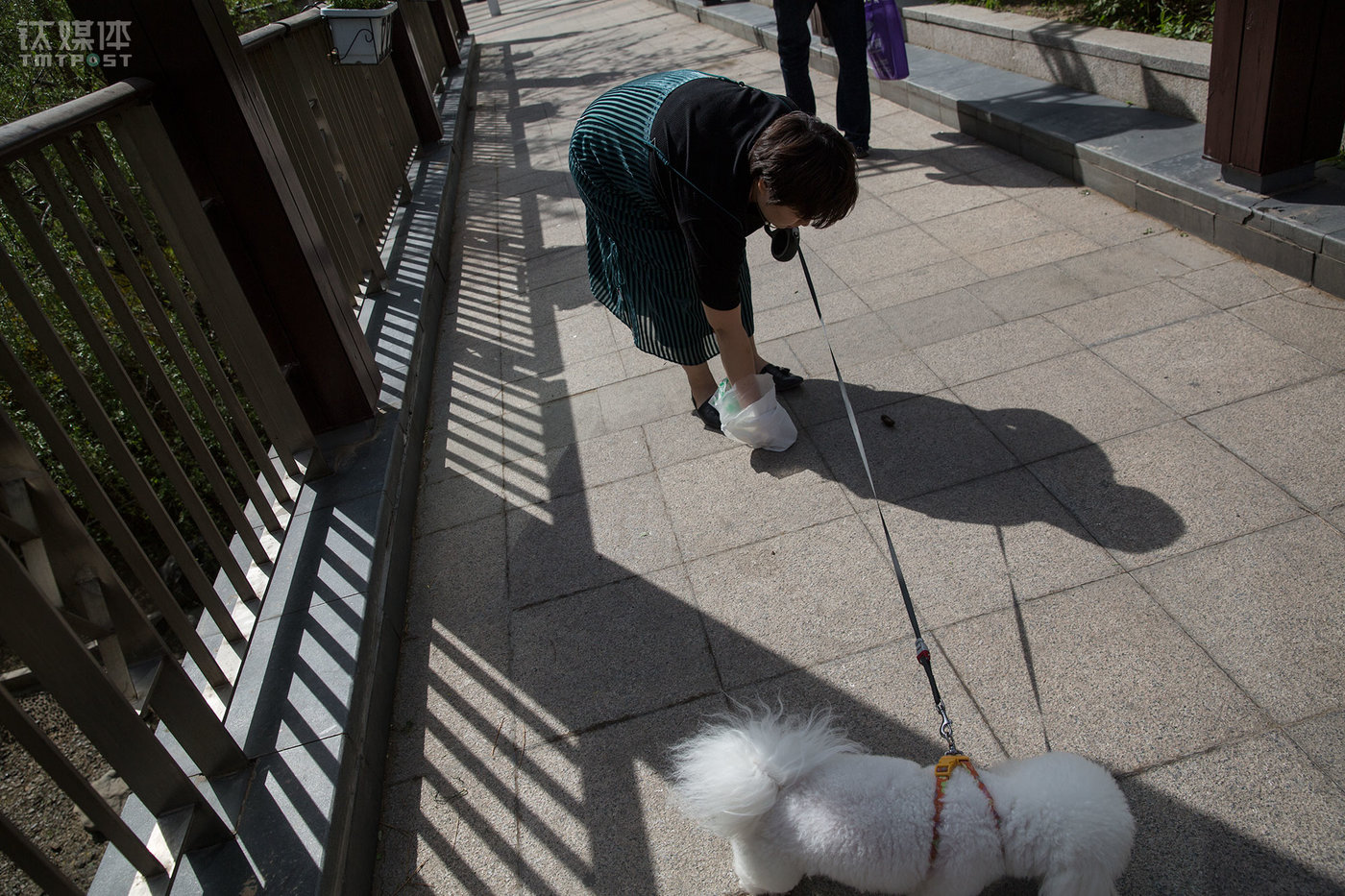 Jieni picks up Apple's waste when walking the dog. She walks Apple in the community everyday. She calls dogs peeing behavior "posting moments" – the way of dogs socialize. Jieni looks forward to seeing her own baby accompanied by these animals. She wants her child know how to treat others friendly. "Keeping animals also enhances children's immunity," she said.

The article is written by the author @Zack Chen of TMTpost, please note source and hyperlink when reproduce.